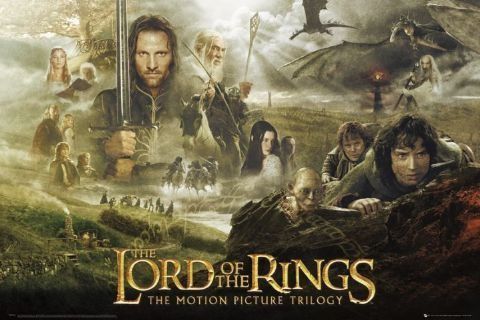 You Can't Make This Stuff Up, etc: "Anti-Racists" Say Lord of the Rings too "Eurocentric"

The Southern Poverty Law Center (SPLC) is a self-appointed "watchdog" organization in Montgomery, Alabama that purports to keep a sharp eye out for "racism" and "hate."

Despite its name, it doesn't seem to have much to do with either the South or the law, let alone poverty, other than avoiding the latter for its own officers, most of whom reportedly pull down six-figure salaries for themselves.

But this week its well-paid but merciless eye fell upon a target not usually associated with "hate"—the immensely popular and widely praised epic film series "Lord of the Rings," the last installment of which is now showing at your local Bijou and has been nominated for no fewer than 11 Academy Awards.

The SPLC's website, tolerance.org, last week reprinted an op-ed from Pacific News Service by Andrea Lewis, a San Francisco based writer who has discovered that at least the current film in Peter Jackson's stunning cinematic version of the three-volume novel by J.R.R. Tolkien should really have been named "The Return of the Patriarchy."

There just aren't enough fighting females in the movie for Miss Lewis, but she also doesn't like it because "Almost all of the heroes of the series are manly men who are whiter than white" and "exude a heavenly aura of all that is Eurocentric and good. Who but these courageous Anglo-Saxon souls can save Middle Earth from the dark and evil forces of the world?"

Miss Lewis thinks "Lord of the Rings" is bad because it reflects white racial and patriarchal stereotypes, and as a matter of fact, it probably does.

That's because those "stereotypes" are integral to the complex tale of civilizational struggle that Tolkien was telling, a tale that thoroughly modern multiculturalists would prefer had never seen cold print because it also happens to be the tale of our real civilization.

It's the tale of our real civilization because the kings, warriors and heroes who led us have always been manly men who really were whiter than white, and that just might have had something to do with why they won the struggle against their civilization's enemies, medieval and modern, at all.

That, of course, is what Miss Lewis and her pals at the SPLC don't like.

What they do like is "The Matrix," the endless, tedious and incomprehensible special effects film series for teeny boppers that features the non-white and mixed race heroes Miss Lewis and her multiculturalist friends demand. As she writes in comparing the two films:

"Neo, the [Matrix] trilogy's central figure, is played by mixed-race actor Keanu Reeves. His savior and mentor is Morpheus (Laurence Fishburne), a powerful leader who also happens to be a black man. The wisest figure in 'The Matrix' is the Oracle, a warm and witty African American woman.

"The films also are infused with a strong sense of Asian style and culture, exemplified by the character Seraph (Collin Chou) who is both a martial arts expert and Buddhist meditation practitioner."

Perhaps here too you catch her drift.

The drift is that what Miss Lewis and the SPLC boys who chose to reprint her article like is not "tolerance" and what they oppose is not "hate."

What they oppose is any positive portrayal of white people.

What they like is any production that writes whites out of the picture.

Well, not entirely. Another reason Miss Lewis likes "The Matrix" is that it depicts whites as villains.

"Most of the really bad guys in 'The Matrix'," she gloats, "are Euro," including a Frenchman, two British albino twins [Peter and John Brimelow write: hey!] and "a rather stuffy and pompous white guy with white beard and white suit who reeks of imperialism."

What she really approves of is any production that not only demotes whites from heroic roles but serves to demonize them in new anti-white stereotypes. Nothing more clearly exposes the SPLC's real anti-white agenda than Miss Lewis' silly article. The "multiculturalism" that obsesses her and the SPLC is just as steeped in hate—of whites—as any of the goof balls they "investigate" (and maybe a good deal more). It's just hate of a different hue.

That story is about how the enemies of their civilization were crushed by manly men (and hobbits) who had the strength and courage to fight back.

I understand why people like Miss Lewis and the SPLC don't much care for it.