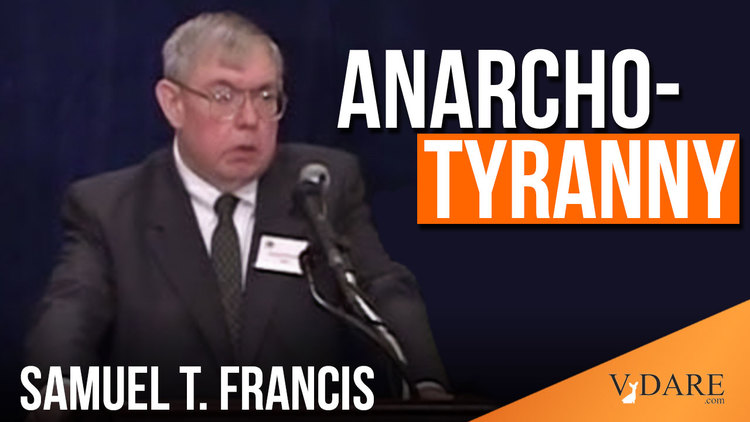 Anarcho-Tyranny And Sam Francis Continue To Enter The Mainstream

Anarcho-Tyranny, the concept developed by the great Sam Francis, continues to break into the mainstream. The newest reference was in Breitbart, referring to the tragic case of Julian Assange. Interestingly, it begins by quoting French patriot Eric Zemmour, who has given perhaps the most precise definition of anarcho-tyranny since Sam Francis himself.

In a recent speech, French presidential contender Eric Zemmour asked a pertinent question: “Why is the State so powerless against criminals, and yet so ruthless with honest people?”

Zemmour was observing a trend that many others on the right have noticed, but that liberals seem blissfully unaware of — the trend of anarcho-tyranny.

Anarcho-tyranny refers to a state in which the deserving face no enforcement of laws, while the undeserving face the full force of state tyranny.

In Queens, New York, a suspected gang member and murderer was let out onto the streets under the city’s “no bail” laws.

In the same borough, a man who tried to kill an undercover police officer by throwing him onto subway tracks was also released without bail.

In Wisconsin, black supremacist Darrell Brooks was released for a paltry $1,000 bail by a District Attorney who praised the Democrat “bail reform” movement. Brooks, who had a 20-year record of violent criminal behavior (including attempting to run someone over), went on to plow his SUV into the Waukesha Christmas parade, killing five.

For nonviolent crimes, the situation is even worse. In San Francisco, petty theft has been decriminalized, leading stores across the city to shut down amid a shoplifting spree.

An outside observer might assume that the United States has entered a state of anarchism, with the government unwilling or unable to enforce its laws, even against violent criminals and murderers.

They would be wrong. The fact of the matter is, the U.S. government is as powerful as it has ever been. It has simply decided that only political dissidents will feel its full force.

No one knows this better than Julian Assange, who recently lost an appeal against extradition from the United Kingdom to the United States.

This case is striking because it wasn't that long ago that Julian Assange was a hero to the great and the good. Who can forget the hagiography that Hollywood made about him when he was best known for exposing alleged military misdeeds in the Middle Eastern wars? It was just in 2013, with Benedict Cumberbatch portraying the dissident.

One wonders what Cumberbatch would say about him now.

However, Assange and Wikileaks exposed some of the secrets of Hillary Clinton during the 2016 presidential campaign. This arguably allowed Donald Trump to become president. Thus, the liberal hero became a traitor. The critics of American foreign policy suddenly became hawks demanding nothing less than war against Russia, mostly driven by journos' own ethnic hatreds and neuroses. It is a classic illustration that true politics is about who/whom and has nothing to do with "principle."

Now, Julian Assange will be shipped back to the United States. The same lawyers, activists, and NGOs who once championed his cause are rooting for his trial and possible imprisonment or even execution. And the so-called "free press," those who constantly tell us they are protecting us from power, are strangely silent. It's a remarkably potent example of how simple it is to be successful in politics—just repeat the right Narratives.

There's also a more optimistic view of all this. Sam Francis, despite being seen as a "fringe" figure by Conservatism Inc., is arguably more influential than ever. And it is to him and his view of politics that we need to turn if we want to ever overthrow this rotten System [Sam Francis, the Prophet, by Gregory Hood, American Renaissance, September 27, 2019].