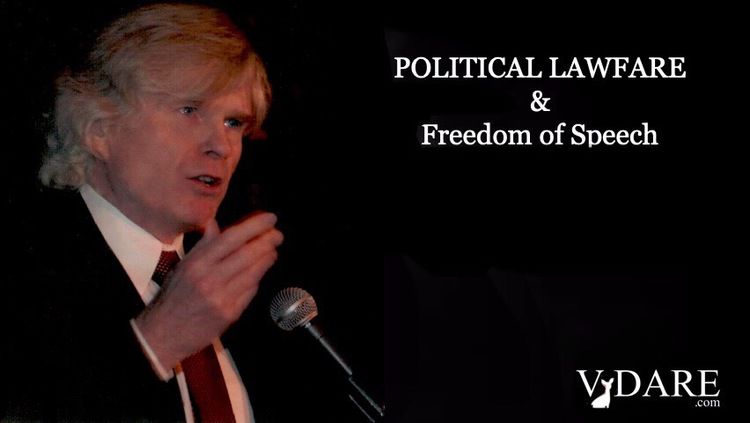 Even informed Americans simply don’t know about the totalitarian crackdown against free speech going on in their own country. Thus a reader who follows VDARE.com on Twitter just responded to our criticism of Yoram Hazony and David Brog’s manipulative exclusion of American immigration patriots from their just-concluded so-called “National Conservatism” Conference by asking: “How about creating your own event?”

Answer: Because our venues cancel due to threats from the Left.

We protect ourselves from institutional damage in these situations, thanks to our strong contracts. But it’s extremely harmful to the growth of patriotic immigration reform movement that its supporters can’t exercise their elementary rights to meet, share ideas, network and organize.

Which, of course, is why the Left keeps pressuring.

However, the ultimate question raised by VDARE FOUNDATION v CITY OF COLORADO SPRINGS, JOHN SUTHERS is why a Republican Mayor in a Republican area (El Paso County, in which Colorado Springs is  located, voted 56%-34% for Trump in 2016) would join in the Leftist campaign against us, when we are essentially just defending Trump’s 2016 immigration agenda.

Of all the litigation that VDARE.com has been forced reluctantly to initiate, this is the case that our lawyers regard as the most straightforward. There is very extensive federal case law establishing the principle that local governments must respect the First Amendment rights of even unpopular groups.

But this has not prevented Suthers and the City of Colorado Springs’ lawyers from digging in their heels, as I reported on May 15: VDARE.com’s First Amendment Suit Against CO Springs Mayor John Suthers: An Update—And Thanks To Our Patriot Lawyer Readers!

Note that our lawyers filed as an exhibit the Colorado Springs Charter [PDF]. This shows that the City of Colorado Springs is responsible for Mayor Suthers' actions because he was the "final policy maker."

(Again, I want to thank the patriot lawyer readers who have been writing to us about this case.)

Our lawyers believe this case will go to trial. Although they are confident, every single step is expensive—and Mayor Suthers’ bills are being paid by the unfortunate taxpayers of Colorado Springs.

Please help us (tax-deductibly) NOW! (You can earmark your donation).

We (and your posterity) will be most grateful.