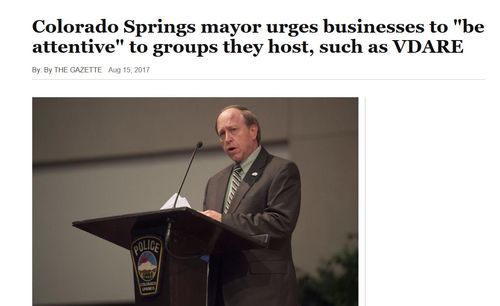 On March  7, I posted “PATRIOTS HAVE RIGHTS. THEY HAVE JUST NOT ORGANIZED TO DEFEND THEM—UNTIL NOW.” Peter Brimelow On VDARE.com’s First Amendment Civil Rights Suit Against CO Springs RINO Mayor John Suthers, which summarized of Colorado Springs Mayor John Suthers’ attack on our First Amendment rights and its role in the 2017 cancellation of our planned Colorado Springs conference. Explaining our need to raise money to fight back, I wrote:

Litigation can be expensive, time-consuming and distressingly unpredictable. But, like the American immigration patriot movement in general, VDARE.com has entered what the Chinese military theorist Sun Tzu called “death ground”— we must fight or die.

We aim to spend money efficiently—to achieve specific tactical victories and begin to turn the tide of falsehoods and arbitrary abuses of power that will otherwise smother America’s quest for a patriotic immigration policy.

I also expect, as VDARE.com’s Editor, that opening this new legal front will generate some really interesting articles.

The law is on our side. Now we just need you. Please give generously.

I want to thank our wonderful readers who responded to this appeal.

And in particular, I’d like to thank our lawyer readers who went to the trouble of reading our brief and writing in with really helpful suggestions. As a financial journalist for 40 years,  I’ve long been aware that there are readers out there who will check all numbers posted in any article and point out mistakes with glee. It now materializes there is also a whole species of patriot lawyers out there willing to inspect and improve legal filings.

All too notoriously, the promise of the internet has been clouded in recent years by shadow-banning, deplatforming and assorted Silicon Valley Social Justice Warrior atrocities. We are resorting to legal action in considerable measure to stop them (more on this to come). But, in respect of crowd-sourced patriot litigation at least, the promise of the internet is still bright.

Our original filing is here [PDF ]. Note that we are claiming, among other things, compensatory damages of ONE MILLION DOLLARS—AND attorney fees and costs! As I said in March, there is very extensive federal case law establishing the principle that local governments must respect the First Amendment rights of even unpopular groups. It’s not a close call. This is why our lawyers are so confident. We have a very real chance to score a stunning victory for VDARE.com—and for the cause of immigration patriotism.

Since then, there have been several developments:

Judge Kathleen Tafoya is expected to rule on the motion to dismiss sometime in July or August.

Our lawyers believe this case will go to trial. Although they are confident, every single step is expensive—and Mayor Suthers’ bills are being paid by the unfortunate taxpayers of Colorado Springs.

We (and your posterity) will be most grateful.