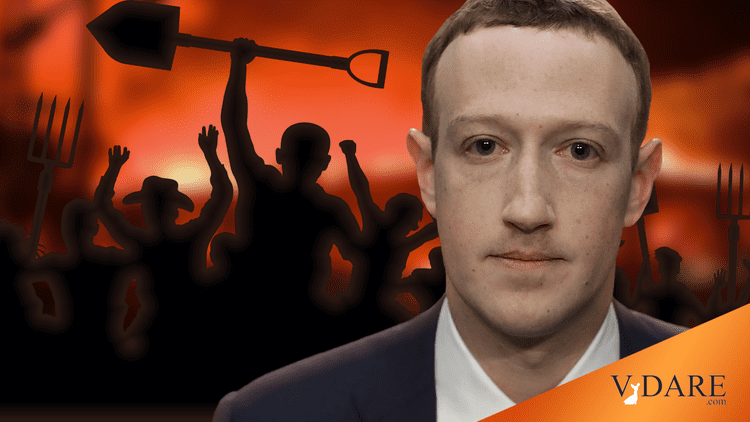 John Derbyshire: Look On The Bright Side—BLM "Revolution" May Eat Its Parents Too, Starting With Mark Zuckerberg

The brave spirits of Seattle originally named their new country Chaz, for Capitol Hill Autonomous Zone. Just as all that was in play, we learned that Chaz has renamed itself to Chop, the Capitol Hill Organized Protest. Why? I asked around.

Apparently the authorities in Chaz were immensely flattered to see themselves being compared to French Revolutionaries. Now, a thing everyone knows about the French Revolution—even, I guess, the drug-addled, low-IQ, miseducated rabble running Chaz—a thing everyone knows is that the revolutionaries chopped off the heads of the former ruling class, including the king and queen, with the guillotine.

"That's what we'll do!" the Seattle mob is telling us by renaming themselves Chop.[They're already joking about guillotines in CHAZ/CHOP by Thomas Lifson, American Thinker, June 16, 2020 ]

But, since the teaching of history collapsed into anti-white sermonizing forty years ago, nobody much younger than sixty knows that a couple of years after that wonderful, laudable chopping-off of aristocratic and counter-revolutionary heads in France, the original radical revolutionaries themselves faced the blade. Danton got chopped; so did Robespierre; so did Desmoulins; so did Saint-Just; and so on.

And every other radical revolution has followed the same path. Russia? There is a mighty host of Old Bolsheviks lined up in the Afterlife to tell you all about it: Kamenev, Zinoviev, Bukharin, Trotsky, …

And if comparing the Seattle mob to French revolutionaries is in the air, I can't resist laying on you once again the line—I know I've used it before—the line from Ramzpaul to the protestors outside the 2014 American Renaissance conference, quote:

Do you really imagine you're sticking it to the Man? You are the Man!

For the Mighty—the big corporations, the prestigious colleges, the media, the Uniparty that has a stranglehold on our politics, our Woke judiciary that has an even tighter death-grip on our jurisprudence—for them, for the mighty in their seats of power, these riots and lootings and vandalism and silencings are all gravy.

And like trained puppies, the Mighty know what to do without being told. When the anti-white shakedowns started in earnest forty years ago, when white Americans still had a few vertebrae and a smidgen of testosterone, the shakers—Al Sharpton, Jesse Jackson, and Michelle Obama—had to put in a bit of effort to squeeze some blood from the Establishment stone.

They had to actually show up at the corporate headquarters, with a dozen or so mean-looking retainers alongside, and make veiled threats to bring the company's operations to a standstill if they didn't pony up a million or two to Rev'm Al's National Action Network, Rev'm Jesse's Rainbow Push, or Michelle's Public Allies.

Nice little hospital you have here. Be a shame if your workers marched off the job to protest discrimination …

No more of that! Now that the Mighty know which side of the who-whom game it's the most profitable and the most trouble-free to be on, and which side wins the most media applause—think positive free advertising —and which side best preserves their power, status, and wealth; now that's all clear, the shakedown artists don't have to do anything.

The money flows in automatically, overnight, while Al, Jesse, Michelle, and whoever runs Black Lives Matter are all sleeping—or whatever it is these bloodsuckers do at night.

"You are the Man!" At any rate, the Man has no problem with you, nor any major point of ideological disagreement. The people they do have a problem with are the harassed, underpaid, overtaxed, disillusioned and dispirited, mocked and humiliated, scorned and silenced white middle class.

Will the worm turn at some point? Will middle-class whites discover those missing vertebrae?

I wouldn't bet on it. I'm going to come straight out and confess my darkest, most uncharitable thoughts, though. Here they are. Listeners of tender sensibilities might want to skip.

If a miracle happens, and middle-class white Americans stand up and start yelling back at the mob, and take charge of things once again, I would look forward to seeing Jack Dorsey, Mark Zuckerberg, Jeff Bezos, Sundar Pichai—that's the CEO of Google—Jeff Zucker, Rachel Maddow, Chris Hayes, Don Lemon, Bill de Blasio, Dean Baquet, Jay Inslee, Lindsey Graham, Nancy Pelosi, Chuck Schumer, … How many is that? Am I up to a tumbril-full? This is just the first batch, mind.

If such a miracle were to happen, I'd be thrilled to watch these Establishment parasites headed down Pennsylvania Avenue on a big old tumbril for an appointment with Madame la Guillotine on the White House lawn. Thrilled? I'd stand on line all night to get a front row seat, with the tricoteuses.

That would be revolution—real revolution, not the self-indulgent play-acting of pampered pets.

Jack, Mark, Jeff, Chuck, Nancy: Come on, get aboard that tumbril. It only hurts for an instant if it's done right.