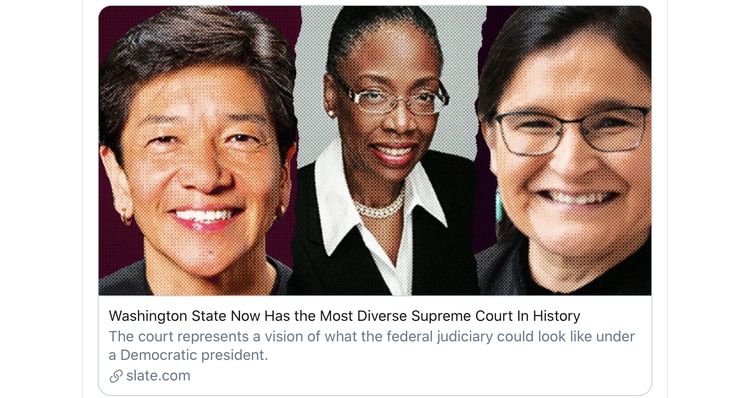 I am long since resigned to the fact that our legal system has been utterly corrupted by Cultural Marxism. Even so, this story from Slate.com left me with my jaw hanging loose in amazement.

Slate is fully CultMarx-compliant. They started off this story lamenting that, quote: "Donald Trump's Presidency has been a disaster for judicial diversity," then they go to the good news. While the federal judiciary may be going to White Supremacist Hell in a handbasket, out there in the states, Democratic governors are diversifying their state judiciaries for all they're worth.

Last year, we did a study that found most states' high courts are overwhelmingly white and male. Washington was an outlier — and it now has the most diverse Supreme Court in history.https://t.co/v38LrjDoNQ

Would you like to hear about Governor Inslee's two other appointees to his state supreme court? I know you would. Here they are: Raquel Montoya-Lewis, a Jewish Native American, and Mary Yu, an Asian-American Latina lesbian. Slate's conclusion: "The court represents a vision of what the federal judiciary could look like under a Democratic president."

I need a drink.