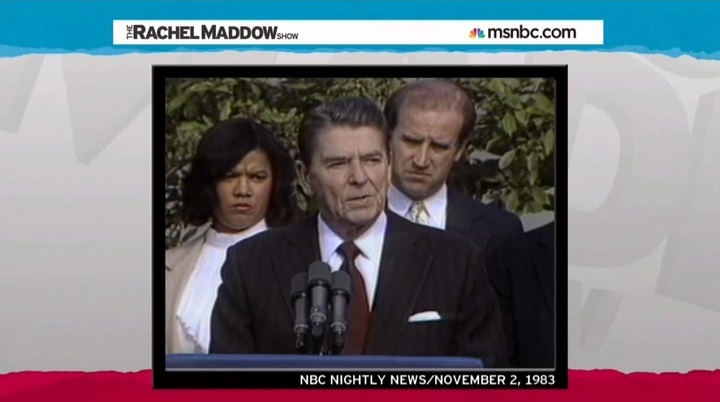 That MSNBC routinely, almost compulsively, mischaracterizes what conservatives say is nothing new. It's what makes the network so adorable. But in a recent trend, anchor Rachel Maddow has been upping the ante, altering quotes we just heard her play on tape.

"Chris Wallace, NBC Reporter (by miraculous coincidence, currently a Fox News anchor): 'There was an air of celebration in the Rose Garden and an underlying tension. White House officials wrestled for days how to usher in a holiday the president opposed. They finally decided to embrace it. ... Maybe that's what today was about, that blacks have the power to make politicians do things.'"

End tape, cut to Rachel, taking notes, muttering with disgust: "The blacks now have the power ..."

Except Wallace didn't say "the blacks." Refer to the tape. By adding the simple article "the," Rachel turned Chris Wallace from a garden-variety 1980s news reporter into Archie Bunker. It takes a special kind of zealotry to play a tape of someone and then immediately lie about what viewers just heard him say.

Rachel's rewrite of Wallace (again, a Fox News host) was astonishingly similar to her misquote of Republican Senate candidate—now senator—Joni Ernst just before the November elections. Maddow inserted the word "the" into Ernst's statement, entirely changing her meaning.

The very next line in the transcript has Rachel sneering—as if repeating Ernst's line: "I believe in my right to defend myself from the government with my beautiful little Smith & Wesson, 9 millimeter." She then riffed on her own rewrite of Ernst's statement, warning that a Senate candidate "is threatening to turn to armed violence against the government if she doesn't get what she wants ..."

Or as anyone at MSNBC could tell you, it means: "THERE'S A BLACK MAN IN THE WHITE HOUSE!"

That's twice in less than three months that Maddow has dramatically altered the meaning of someone's words in the exact same way.

Tomorrow, on "The Rachel Maddow Show":

First, by the way, contrary to Rachel and the entire MSM, Scalise had not spoken to a Duke-backed group, knowingly or not. It turns out that Scalise had spoken to another group that happened to be having a conference in the same hotel. This is according to the New Orleans Times-Picayune, in an article published five days before Rachel claimed otherwise—unless Rachel's staff knows something the state's leading newspaper does not. (And it is a crack staff: They aced Gender/Race/Sexuality Studies at Oberlin!)

Rachel quoted newspapers from 16 years ago, reporting that Scalise said he was "David Duke without the baggage," and that "he embraces many of the same conservative views as David Duke, but he is far more viable."

According to Rachel, the "conservative views" embraced by both Scalise and Duke were, obviously, white supremacy.

By artfully hiding Duke's reincarnation, Maddow convinced her easily fooled viewers that Scalise was running on repealing the Civil Rights Act. In fact, both Scalise and Duke were running on conservative issues. The difference was: Duke had a KKK past. Scalise did not.

I am willing to bet that when Scalise said he was David Duke without the baggage, the "baggage" was the KKK past.

In fact, unless Rachel—or that fantastic diverse staff—can produce Scalise campaign literature from 1999, highlighting his views on repealing the 14th Amendment, reinstating slavery and opposing miscegenation, I am almost positive that the "conservative views" Scalise was touting to suburban New Orleans voters were more along the lines of, say, smaller government, prayer in schools and opposition to abortion.

If by "opposition to abortion," Rachel hears "reinstituting the slave trade," I can't help her. At that point, we're talking full-on dementia.

I'm no fan of David Duke: I hate long-time Democrats pretending to be Republicans.

But more than a decade after Duke quit the Klan—he was out by 1980—Rachel's esteemed MSNBC colleague Al Sharpton was denouncing the Jews of Crown Heights as "diamond merchants." I assume from your surname, Rachel, that you are, at least in part, a "diamond merchant." What do you think about Sharpton having his own show on MSNBC and visiting the White House a dozen times? Ann Coulter is the legal correspondent for Human Events and writes a popular syndicated column for Universal Press Syndicate. She is the author of TEN New York Times bestsellers—collect them here.