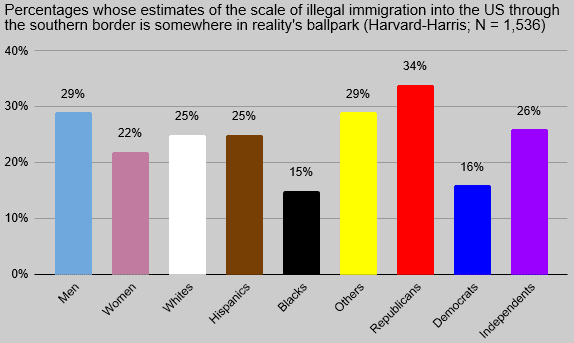 The American media is failing spectacularly. If it is magnanimously granted that the corporate media’s primary job is to inform consumers of its content about what is going on in the world, that is. (Parenthetically, I do not grant as much.) Getting it this wrong cannot merely be the result of incompetence. Mendacity must be in play.

Anyway, a Harvard-Harris poll last spring asked respondents “about how many people do you think are caught trying to enter through the southern border each year?” Five possible ranges were offered as answers in multiple choice format.

So on a five-item multiple choice question, we’re giving credit for two possible responses. If participants randomly selected answers, the rate of correct responses would be 40%. Well, not a single demographic category of the 26 the survey reported results for did as well as they would have had they randomly guessed:

The American public doesn’t just lack knowledge about what is happening along the southern border, it has anti-knowledge of the situation. The residuals for each of the demographic groups presented in the graph above errantly think fewer than 250,000 attempted border-crossers are apprehended annually.

If we don’t want extremist lunatics shooting up Walmarts in desperate frustration over what they perceive as an invasion the powers that be refuse to acknowledge even exists, let alone deal with–and I certainly don’t–we could stand to have our vaunted media organizations report something approximating the truth about an issue that consistently polls near or at the top of the list of the things Americans find concerning, instead of constantly lying through their teeth about it.