The 2020 State of the Union event was quite the political show. President Trump discussed policy successes, from the economic expansion to improved border control  (with Mexico’s help, as it happened).

Through it all, Speaker Pelosi lurked above, busily turning pages, shaking her head negatively and mouthing disapproval. It was what psychologists call “passive aggressive behavior,” although she did actively attack her paper copy of the president’s speech as a finale: 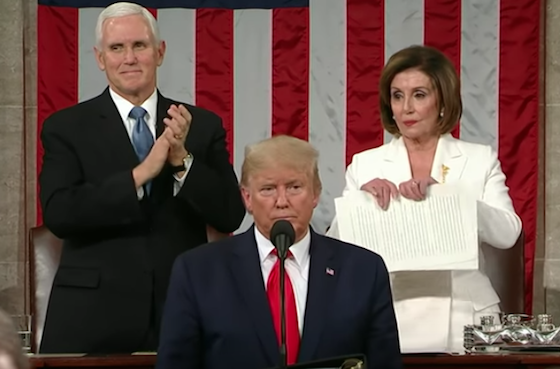 On the next day, her whole impeachment gambit fell flat, as the Senate soundly defeated the months-long waste of time. Will she shut up and stop impeaching now, please?

There are plenty of worthwhile things the House of Representatives might work on — infrastructure, fixes to healthcare, E-verify. It is the House’s job to legislate for the good of the American public, in case they have forgotten.

Stuart Varney had a critical evaluation of Pelosi’s performance:

STUART VARNEY: Speaker Pelosi was in a difficult position. She had to sit and watch the president she detests scroll through a long list of his successes — tough indeed. Mr. Trump is winning on so many fronts, and the speaker is losing, but that does not excuse her behavior.

This was the defining moment of the night. Nancy Pelosi ripping up her copy of the president’s speech. Four pages, four rips. I will call it Petulance — that is rather mild statement to use, compared to the avalanche of criticism that erupted on social media. Later she told Fox News, she ripped up the speech, quote, because it was the “courteous thing to do considering the alternatives.”

What does that mean? I think she knew she had no serious response to the president’s achievements. So, she simply engaged in a theatrical tantrum. That is the way I see it.

During the speech, the speaker was Rude. That is an old-fashioned word, but it’s accurate. When the president called out legislators for providing taxpayer-funded healthcare for millions of illegals, she mouthed, “Not true. It’s not true.”

But wait, the speaker is from California, which has indeed pledged to use tax money for illegals healthcare. Case closed.

As the president outlined America’s remarkable economic performance, she shook her head; she rolled her eyes. Why did she do that? She doesn’t believe the booming economy? Really? She believes she should get some of the credit? That is a stretch. She is incapable of giving any credit to the president who deserves it, Donald J. Trump.

What we saw last night was we saw a speaker on the spot, stuck behind the president on camera. She could have had the good grace to do a grin-and-bear-it kind of performance. But she detests him. And she did a scowl, head shake, eye roll, theatrical rip-up performance instead. In the court of public opinion the speaker lost. The president and America won, hands down.