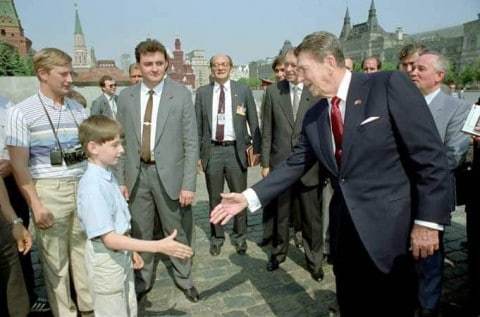 Patrick J. Buchanan: Has Russia Given Up on the West?

By the end of his second term, President Ronald Reagan, who had called the Soviet Union an "evil empire," was strolling through Red Square with Russians slapping him on the back.

Bliss was it in that dawn to be alive.

And how have we husbanded the fruits of our Cold War triumph?

An uncoded message to the West from the East.

Bolshevism may be dead, but Russian nationalism, awakened by NATO's quick march to Russia's ancient frontiers, is alive and well.

Russia appears to have given up on the West and accepted that its hopes for better times with President Donald Trump are not to be.

U.N. Ambassador Nikki Haley is berating Russia for secretly trading with North Korea in violation of U.N. sanctions, saying, "Lying, cheating, and rogue behavior have become the new norm of the Russian culture."

Cold wars don't get much colder than defaming another country's culture as morally debased.

The U.S. has also signaled that it may start supplying naval and anti-aircraft weaponry to Ukraine, as Russia is being warned to cease its inspections of ships passing from the Black Sea through the Kerch Strait into the Sea of Azov.

The three-mile-wide strait lies between Crimea and Kerch Peninsula. In Russia's eyes, both banks of the strait are Russian national territory.

With U.S. backing, Ukraine has decided to build a naval base on the Sea of Azov to "create conditions for rebuffing the aggressive actions of the Russian Federation in this region."

Kiev has several patrol boats in the Sea of Azov, with a few more to be transferred there in coming months. Russia's navy could sink those boats and wipe out that base in minutes.

Are we going to send our Navy across the Black Sea to protect Ukraine's naval rights inside a sea that has been as historically Russian as the Chesapeake Bay is historically American?

Poland this week invited the U.S. to establish a major base on its soil, for which Poland would pay two billion dollars, to be called "Fort Trump."

Trump seemed to like the idea, and the name.

Yet, the Bush II decision to install a missile defense system in Poland brought a Kremlin counter-move: the installation of nuclear-capable Iskander cruise missiles in Kaliningrad, the former German territory on Poland's northern border annexed by Stalin at the end of World War II.

In the Balkans, over Russian protests, the U.S. is moving to bring Macedonia into NATO. But before Macedonia can join, half its voters have to come out on Sept. 30 to approve a change in the nation's name to North Macedonia. This is to mollify Greece, which claims the birthplace of Alexander the Great as it own.

Where are we going with all this?

With U.S. warships making regular visits into the Eastern Baltic and Black Sea, the possibility of a new base in Poland, and growing lethal aid to Ukraine to fight pro-Russian rebels in the Donbass and the Russian navy on the Sea of Azov, are we not crowding the Russians a bit?

Are we confident the Russians will always back down?

When Georgia, believing it could kick Russian peacekeepers out and re-annex its seceded province of South Ossetia, attacked in August 2008, the Russian Army came crashing in and ran the Georgians out in 48 hours.

George W. Bush wisely decided not to issue an ultimatum or send troops. He ignored the hawks in his own party who had helped goad him into the great debacle of his presidency: Iraq.

So, what exactly is the U.S. grand strategy with regard to Russia?

What might be called the McCain wing of the Republican Party has sought to bring Ukraine and Georgia into NATO, which would make the containment of Russia America's policy in perpetuity.

Are the American people aware of the costs and risks inherent in such a policy? What are the prospects of Russia yielding always to U.S. demands? And are we not today stretched awfully thin?

Our share of the global economy is much shrunken from Reagan's time. Our deficit is approaching $1 trillion. Our debt is surging toward 100 percent of GDP. Entitlements are consuming our national wealth.

We are committed to containing the two other greatest powers, Russia and China. We are tied down militarily in Afghanistan, Iraq, Syria and Yemen, with the War Party beating the drums for another and larger war—with Iran. And we are sanctioning adversaries and allies for not following our leadership of the West and the world.

In looking at America's global commitments, greatly expanded since our Cold War victory, one word come to mind: unsustainable.