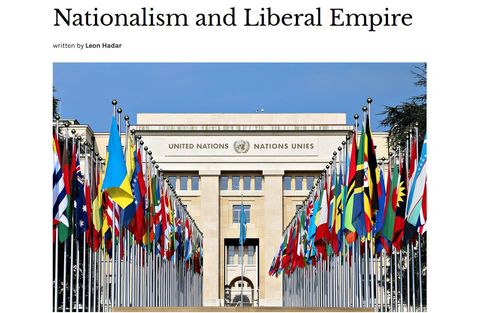 Over at the Quillette website (of which I offered a not-unfavorable mention in last week's Radio Derb) Leon Hadar has an interesting pro-nationalist review of Yoram Hazony's new book The Virtue of Nationalism.

[Hazony] argues contra the conventional wisdom that reigns in the intellectual centers of Manhattan and Cambridge, London and Paris, that nationalism has been "the engine that established modern political liberty" and a "spur to diversity among nations." According to the contrarian from Jerusalem, it is a political theory that suggests "the world is governed best when it is divided into diverse nations, each having independence and self-government."

After reading Hazony's tome and assessing what he calls "a statement of the reasons for being a nationalist," I was struck by the realization that much of what he had to say about the subject seemed so obvious and self-evident, at least to me. And I was wondering why stating one's embrace of nationalism creates so much controversy these days, and therefore requires writing a book that celebrates the "virtues of nationalism." My immediate response to his four-cheers-for-nationalism manifesto was, "Duh!"

In the matter of ethnonationalism, Israeli Zionists like Hadar (the reviewer) and Hazony (the reviewee) seem increasingly to be putting themselves forward as Lights Unto the Gentiles.

Touched on briefly in the review (and so far as I can judge therefrom likewise in Hazony's book, which I have not read) is the problem I identified, also in last week's Radio Derb: That a stable, harmonious, prosperous nationalism is hard to get airborne among peoples that don't have … don't have what?  "A unique Anglo-American political and cultural tradition rooted in the heritage of the Protestant religion and English history," suggests Hazony, according to Hadar.

Hm.  Given the existence of successful nations (Japan, Finland) outside that tradition, I think there are other factors causing Failure to Launch among the El Salvadors, Congos, and Afghanistans: lack of a big enough Smart Fraction, perhaps.

For populations like those, a much more attractive option is to be parasitic on successful nation-states. This option is greatly facilitated when citizens of those nation-states exhibit widespread pathological altruism and tolerate feeble border controls.