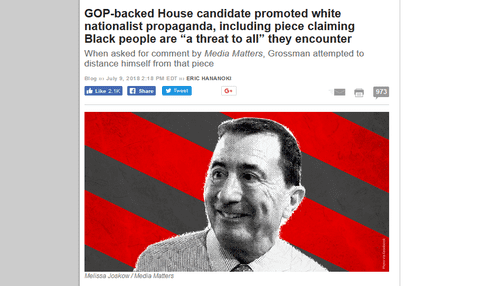 Recently we started seeing traffic on Allen West, Dave Agema, And AMERICAN RENAISSANCE, that we ran in 2014. Allen B. West, a patriotic black Republican, had been impressed by a powerful American Renaissance article by an anonymous (of course) public defender that frankly highlighted problems in the black community. West cares about the black community,  and he posted on his web page about it: Quite Possibly the Most Racist Article You Will Ever Read, December 29, 2014. Agema had linked to the article: Confessions of a Public Defender, (May 9 2014).

Reason for our traffic spike: the same AmRen article has now been causing trouble for another white guy—Seth Grossman, GOP nominee in New Jersey’s Fourth Congressional District, who had linked to it in 2014 with a Facebook post (still online): 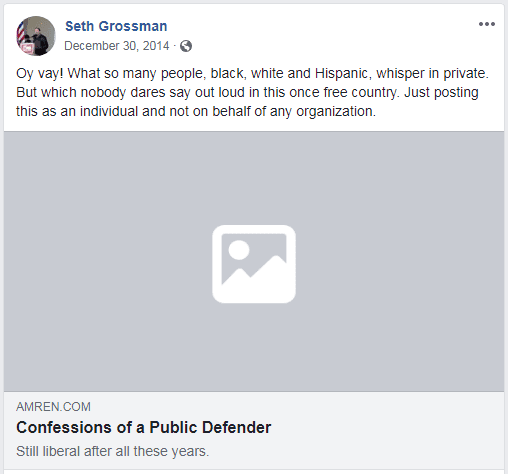 Grossman too apparently also got the link from Allen West.

Back in 2010 (!!), Grossman also linked to Allan Wall’s 2003 (!!) VDARE.com piece Police Cooperate With Immigration Authorities - In Mexico! —which made the entirely correct point, carefully sourced, that Mexican police are required to enforce Mexican immigration law, unlike American police.

And that’s all that CultMarx vigilantes Media Matters have on Grossman. But they put on a full court press:

As a result, Grossman is getting this sort of echo-chambering in Main Stream Media:

Behold, a new breed of Republican for the Trump era.

Then, a video surfaced, courtesy of American Bridge, a Democratic PAC, of Grossman saying “the whole idea of diversity is a bunch of crap.” Grossman then proclaimed diversity “evil.” CNN uncovered previous instances of Grossman calling Kwanzaa a “phony holiday” created by “black racists,” labeling Islam a cancer and saying faithful Muslims cannot be good Americans.

Grossman gave an interview claiming that he supports diversity in part because he likes “to go to Chinese restaurants.” He called the oppression of African Americans “exaggerated.” And this week, the liberal group Media Matters found that Grossman had previously posted a link on Facebook to a white-nationalist website’s piece claiming black people “are a threat to all who cross their paths.”

After weeks of delay, the NRCC finally withdrew its endorsement .

Look what crawled out from under Trump’s rock, by Dana Milbank, Washington Post, July 11, 2018. [links in original]

WaPo’s Milbank can’t exactly call Grossman anti-Semitic  because Grossman is so unapologetically Jewish (see his tweet above). In fact, the imagery Milbank uses against Grossman might itself be considered anti-Semitic except for the fact that  Milbank [Email him]) himself is Jewish—not the first time he's played this trick. Another of the Washington Post writers condemning Grossman’s “extremism” is Paul Waldman, who turns out to be a former staffer for Media Matters [ Trump is determined to make Republicans’ challenge in November even more difficult, by Paul Waldman, June 19, 2018]).

Note that the method of Media Matters and its the MSM mouthpieces is what we call “Ransom Note Racism”—pick bits out of context and quote them over and over again. For example, from the Amren.com piece:

This Amren piece is 2600 words long—twice the length of the one you’re reading now—and this is the depressed, depressing but dignified conclusion from a man (probably Jewish, “still liberal after all these years”) who spends all his time with black criminals, trying to keep them out of jail, or trying to talk them into taking the plea bargain so that their jail time can be minimized:

I do not know the solution to this problem. I do know that it is wrong to deceive the public. Whatever solutions we seek should be based on the truth rather than what we would prefer was the truth. As for myself, I will continue do my duty to protect the rights of all who need me.

Who hath ears to hear, let him hear.

The Forward ran a piece in which Grossman plays the “Democrats are Real Racists” card, proving himself a mainstream color-blind GOP type, and clumsily tried to throw VDARE.com under the bus:

Grossman also shared in 2010 a seven-year-old article about Mexican illegal immigration from the site VDare, which the Anti-Defamation League has called a “racist, anti-immigrant website” and which frequently publishes articles by well-known anti-Semites.

In response to the Media Matters report, Grossman said of VDare: “I have never been to their site. I don’t know anything about them. I have no idea who shared that piece with me many years ago.”

“For more than 50 years, the Democratic Party set the agenda for black America,” he added. “Far too many blacks still suffer from crime, poverty, and violence caused by that Democratic Party agenda. I am glad I helped Trump become President so he could change that agenda and get black and Hispanic Americans working again in record numbers. I am running for Congress so I can help Trump do even more to take the Democratic training wheels off the black and Hispanic communities so they can succeed even more.”

Putting aside Grossman’s diss of us, it’s important to note that he’s right—with the exception of the AmRen.com article, everything Gossman’s assailants are accusing him of saying is mainstream stuff that you’ll hear from Conservatism Inc. when it’s feeling feisty.

But it’s not just Coulter, there are lots of “Kwanzaa” posts on National Review by people who haven’t been fired by Rich Lowry.

They probably wouldn’t use the word “cancer”—but they do mean to grow inside the US until they take over. (One of the things Mark Steyn was attacked for, and put on trial in Canada, was quoting a Muslim Imam in Sweden who said “Just look at the development within Europe, where the number of Muslims is expanding like mosquitoes.”)

Indeed, our Allan Wall’s reportage is also mainstream—if you Google “police cooperate with immigration authorities in Mexico”, Allan Wall’s piece is third on the list, but it’s below reports from NPR and above one (really a Michelle Malkin column) from…National Review.

And not only are these kinds of ideas mainstream, they’re what Trump won the Presidency on in 2016.

And Trump won by refusing to apologize for saying them. See his response to being accused of tweeting a picture of Crooked Hillary with a Star of David in it. (Said it looked like a plain star to him,  here’s one with a circle instead—and she’s still a crook.)

Stivers, who backed Trump as the nominee apparently only because he was the nominee, but has mostly voted in Congress for the Trump program, seems something of a weak sister on the Trump program [Stivers can't name district Trump should campaign in, By Kevin Robillard, POLITICO, January 30, 2018]

The New Jersey district that Grossman is running in went for Trump in 2016, so he may find himself seated with other intransigent Republicans in the next Congress.

Proud that NumbersUSA just endorsed me as a "True Reformer" on Immigration. See my recent interview on NJTV. https://t.co/RMAzX7SWdR #WalkAway https://t.co/kzBpQBWh4a