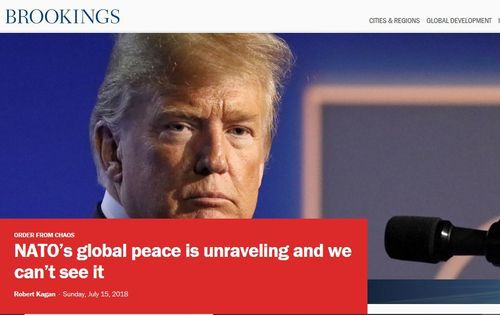 A VDARE.com reader from Maine Says Robert Kagan Fears The Death Of NATO May PREVENT The Invasion Of Europe

From: A Maine VDARE.com Reader [Email him]

This recent article by Robert Kagan concerning the possible decline in the NATO alliance also inadvertently reveals how warped his neo-conservative world view is.

Essentially, Kagan portrays the European peoples as fundamentally dangerous unless under the thumb of dominating transnational institutions such as the EU or NATO. Apparently, he is indifferent to the most significant extra-European invasion in ages, the ongoing and very destabilizing massive incursion of Third-World migrants. Instead, Kagan only laments about the European peoples’ illiberal reactions to these invaders resulting in the breakout of (democratically elected) right wing political movements. His vaunted transnational institutions have not only failed to stop this most blatant occurrence of demographic warfare (NATO), but in some instances have facilitated it (EU).

The transatlantic community was in trouble even before Trump took office. The peaceful, democratic Europe we had come to take for granted in recent decades has been rocked to the core by populist nationalist movements responding to the massive flow of refugees from the Middle East and Africa. For the first time since World War II , a right-wing party holds a substantial share of seats in the German Bundestag. Authoritarianism has replaced democracy, or threatens to, in such major European states as Hungary and Poland, and democratic practices and liberal values are under attack in the Czech Republic and Slovakia. France remains one election away from a right-wing nationalist leadership, and Italy has already taken a big step in that direction. Meanwhile, Britain, which played such a key role in Europe during and after the Cold War, has taken itself out of the picture and has become, globally, a pale shadow of its former self. The possibility that Europe could return to its dark past is greater today than at any time during the Cold War.

NATO’s global peace is unraveling and we can’t see it, by Robert Kagan, Brookings Institute, July 15, 2018 [Links in original]

By alluding to Europe's "dark past" Kagan only reveals his ignorance and prejudices against the peoples and cultures who created Western Civilization. The doctrine to control the perceived threat of European national determination is his self proclaimed "American-led liberal world order". Analyzing the term "Liberal World Order" should give one pause. The "Liberal" is not Jeffersonian in nature, but rather reeks of Hillary Clinton. "World" is self-explanatory, as it ominously directs Liberal values to predominate in all nations. And "Order" implies the soft or hard imposition of those "Liberal" values, something neo-conservatives are not hesitant to do.

"Any student of history knows that it is moments like this summit that set in motion chains of events that are difficult to stop. The democratic alliance that has been the bedrock of the American-led liberal world order is unraveling."

Kagan extols the "democratic" process in the article, but only when the outcome is the subjugation of European's national sovereignty. Witnessing the European people's freeing themselves from of the yoke of corrupt globalist institutions demonstrates how Kagan is on the wrong side of history.