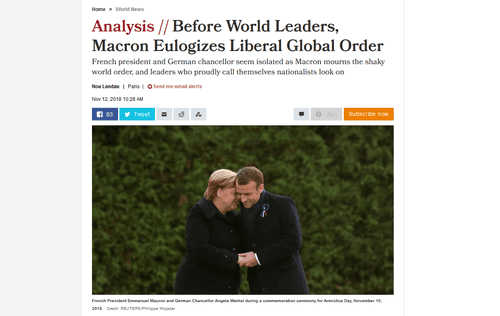 Patrick J. Buchanan: Macron to Trump: “You”re No Patriot!”(But He Is)

In a rebuke bordering on national insult Sunday, Emmanuel Macron retorted to Donald Trump's calling himself a nationalist.

"Patriotism is the exact opposite of nationalism; nationalism is a betrayal of patriotism."

As for Trump's policy of "America first," Macron trashed such atavistic thinking in this new age: "By saying we put ourselves first and the others don't matter, we erase what a nation holds dearest, what gives it life, what makes it great and what is essential: its moral values."

Though he is being hailed as Europe's new anti-Trump leader who will stand up for transnationalism and globalism, Macron reveals his ignorance of America.

Trump's ideas are not ideological but rooted in our country's history.

America was born between the end of the French and Indian War, the Declaration of Independence in 1776 and the ratification of the Constitution in 1788. Both the general who led us in the Revolution and the author of that declaration became president. Both put America first. And both counseled their countrymen to avoid "entangling" or "permanent" alliances with any other nation, as we did for 160 years.

Were George Washington and Thomas Jefferson lacking in patriotism?

When Woodrow Wilson, after being re-elected in 1916 on the slogan "He Kept Us Out of War," took us into World War I, he did so as an "associate," not as an Allied power. U.S. troops fought under U.S. command.

After that war, the U.S. Senate rejected an alliance with France. Under Franklin Roosevelt, Congress formally voted for neutrality in any future European war.

The U.S. emerged from World War II as the least bloodied and least damaged nation because we remained out of the war for more than two years after it had begun.

We did not invade France until four years after France was occupied, the British had been thrown off the Continent, and Josef Stalin's Soviet Union had been fighting and dying for three years.

The leaders who kept us out of the two world wars as long as they did—did they not serve our nation well, when America's total losses were just over 500,000 dead, compared with the millions other nations lost?

At the Armistice Day ceremony, Macron declared, "By saying we put ourselves first and the others don't matter, we erase what a nation holds dearest ... its moral values."

But Trump did not say that other countries don't matter. He only said we should put our own country first.

Or does the president of France see himself as a citizen of the world with responsibility for all of Europe and all of mankind?

Charles de Gaulle was perhaps the greatest French patriot in the 20th century. Yet he spoke of a Europe of nation-states, built a national nuclear arsenal, ordered NATO out of France in 1966, and, in Montreal in 1967, declared, "Long live a free Quebec"—inciting French Canadians to rise up against "les Anglo-Saxons" and create their own nation.

Was de Gaulle lacking in patriotism?

By declaring American nationalists anti-patriotic, Macron has asserted a claim to the soon-to-be-vacant chair of Angela Merkel.

But is Macron really addressing the realities of the new Europe and world in which we now live, or is he simply assuming a heroic liberal posture to win the applause of Western corporate and media elites?

The realities: In Britain, Scots are seeking secession, and the English have voted to get out of the European Union. Many Basques and Catalans wish to secede from Spain. Czechs and Slovaks have split the blanket and parted ways.

A nationalism their peoples regard as deeply patriotic has triumphed in Poland and Hungary and is making gains even in Germany.

The leaders of the world's three greatest military powers—Trump in the U.S., Vladimir Putin in Russia and Xi Jinping in China—are all nationalists.

In France, a poll of voters last week showed that Marine Le Pen's renamed party, Rassemblement National, has moved ahead of Macron's party for the May 2019 European Parliament elections.

If there is a valid criticism of Trump's foreign policy, it is not that he has failed to recognize the new realities of the 21st century but that he has not moved expeditiously to dissolve old alliances that put America at risk of war in faraway lands where no vital U.S. interests exist.

Why are we still committed to fight for a South Korea far richer and more populous than a nuclear-armed North? Why are U.S. planes and ships still bumping into Russian planes and ships in the Baltic and Black seas?

Why are we still involved in the half-dozen wars into which Bush II and Barack Obama got us in the Middle East?

Why do we not have the "America first" foreign policy we voted for?