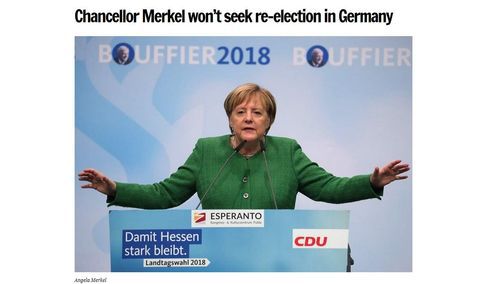 Angela Merkel announced Monday that she would not stay on as German chancellor past 2021, which would be her 16th year in office. She may well not make it until 2021 if her ramshackle coalition government falls apart.

BERLIN — Chancellor Angela Merkel of Germany on Monday took her first concrete steps to move away from political life, saying she would give up leadership of her conservative party while vowing to finish out her term as chancellor until 2021.

Ms. Merkel made her announcement, in a meeting of conservative leaders, after two disastrous results in regional elections that saw her party and its allies slump to near-record lows. Many observers, including in her own party, doubted that she could hang on as a lame duck until 2021, and speculated that elections could come sooner. …

On Sunday, Ms. Merkel’s conservatives won just 27 percent of the vote in the central state of Hesse, down from 38 percent five years ago—their worst showing in the state since 1966. Two weeks earlier, her conservative allies in Bavaria suffered a similar blow.[More]

The rather short first take article doesn’t mention the events of August-September 2015 (although the longer follow-up version did). After all, there’s no agreed-upon name for that string of incidents, so it always takes quite a few words to remind readers of the pivot of her premiership, and who has room for that?

Dr. Merkel’s intention to hang on to the Chancellorship for 16 years has largely passed without comment in the U.S., where concern has been mounting about the trend toward national leaders serving for a long time — Xi, Erdogan, Putin, etc.

I haven’t taken a stance on the main issue of Merkel’s early years of leadership—her salted earth treatment of Southern Europe, especially Greece, following the financial crisis of 2008. The issues are complex and technical and arise from an instrument, the Euro, that I didn’t support.

Dr. Merkel came across as a nationalist punishing a fellow member of the European Union. The financial sins of the Greeks were many, so perhaps the German Chancellor’s nationalist stance was justified. I don’t know. But the Chancellor’s determination that Germany would continue to impose the, in effect, Greater West European Co-Prosperity Sphere on its Continent, including punishing ne’er-do-wells like Greece who couldn’t pay back their loans to German banks reflected a nationalist spirit that some earlier Chancellors such as Bismarck would have appreciated.

But her earlier fiscal scorched earth campaign against her fellow Europeans in Greece stood in striking contrast to her sudden decision in late August 2015 to use her unaccountable power as German Chancellor to suspend unilaterally EU regulations, in effect inviting in a million non-Europeans, largely through poor Greece, and then demand that the rest of the EU help her take some of this sudden burden she had imposed on Germany upon her own whim off her hands.

This of course was the classic instantiation of what I had identified as the ruling Spirit of the Age: leapfrogging loyalties. The power of the zeitgeist to warp decision-making was never clearer than in the sudden turn of a Chancellor previously noted for prudence.

My suddenly making blatantly tangible what had previously been abstract-seeming pot boiling — there were giant columns of marching men intent on penetrating your lands—Merkel’s Mistake made clear that what a few dissidents had been saying for years was where the Establishment was headed.

The German Chancellor’s whim did spectacular harm to the idea of the European Union as a vehicle for promoting the mutual interests of Europeans by prioritizing non-Europeans in the name of “European values.”

Overnight, the European Union’s raison d’etre— to make life better for Europeans—was implicitly redefined as racist; after all, Europeans are white, and therefore, by definition, to promote peace and prosperity among whites is hateful racism. The fundamental point of the European Union was retconned from promoting the welfare of Europeans in Europe to fighting the racism implicit in Europeans having the European continent by facilitating the racial inundation of Europe by non-Europeans.

Soon, support for Merkel’s Mistake came to be seen in the U.S. as a crucial test of support for the “liberal democratic world order,” with Ms. Merkel as its embodiment.

The German political system has had several opportunities to bail out the Western Establishment from this ideological ledge its has gotten itself stuck upon by firing Ms. Merkel for Merkel’s Mistake, but has, to this day, never quite managed that.