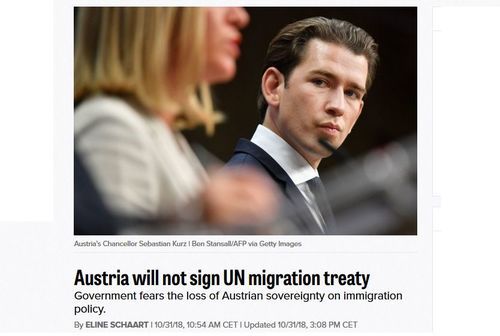 At American Renaissance, author Gregory Hood recently defined the United Nations Migration Pact (which the United States has already dropped out of) as "the UN's plot to end civilization."

The compact says governments should “eliminate all forms of discrimination” against migrants. The distinction between citizen and non-citizen is a form of “discrimination,” so this would end nationality. The compact also wants governments to “promote evidence-based public discourse to shape perceptions of migration.” This sounds like control over public discussion of immigration, which already exists in unfree nations such as the Britain...

The compact also wants an end to “public funding or material support to media outlets that systematically promote intolerance, xenophobia, racism and other forms of discrimination towards migrants,” but claims to want “full respect for the freedom of the media.” The compact even wants governments to enforce a pro-immigrant tone “in the context of electoral campaigns.”

The United Nations has already promoted disposession. In a report called “Replacement Migration: Is It a Solution to Declining and Ageing Populations?” the answer was a resounding “yes.” Of course, since the global fertility rate is decreasing, mass migration is only a temporary solution, pushing back the expiration date on pyramid-scheme “social security” that requires a constantly growing working-age population. The resulting crunch for welfare programs would only be postponed. “Replacement migration” also assumes newcomers will work, whereas 95 percent of migrants in Germany are on welfare...

It is non-binding, but it gives moral legitimacy to impossible demands. The only prosperous societies that survive will be those that defy the United Nations.

Hopefully, Austria will be one of those nations. The nationalist government has dropped out of the compact.

Austria will not sign the United Nations agreement on migration in December, joining the United States and Hungary in backing out of the global pact.

“We have decided that we will not join the pact,” Austrian Chancellor Sebastian Kurz told ORF radio Wednesday, according to Reuters and German media, citing the government’s concerns over a blurring of the lines between legal and illegal migration...

While the pact is not legally binding, Kurz said that he fears the treaty would be at the expense of countries’ sovereignty.

In July, all 193 U.N. member nations, except the U.S., expressed their support for the agreement. Later, the Hungarian government of Prime Minister Viktor Orbán renounced the agreement. Poland is considering withdrawing, too.

This has been a conservative slogan for years, but it is worth repeating; why is the United States funding this evil organization anyway? Perhaps it is time for that old right wing chestnut to return. Not only should every free nation get ouf of the migration compact, it's time for the US to get out of the UN.