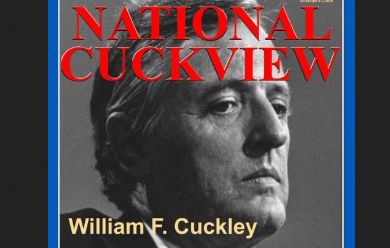 A FORMER NR Reader Says "You Bet We Are In Revolt"

From: A FORMER National Review Subscriber [Email him]

I liked James Kirkpatrick's Vdare.com article  on the #NRORevolt. I am old enough to remember the attack on Pat Buchanan by the NRO crowd. [A Conservative No More, The tribal politics of Pat Buchanan, By Ramesh Ponnuru, October 11, 1999.] I was a subscriber at the time and did enjoy the magazine. I was becoming concerned, however, that Buckley was "losing it". I read the issues on The Bell Curve and Alien Nation and was glad to see the debate on some deep issues. This was the intellectual face of Conservatism way before Jonah Goldberg  was there.

Then the purge started. Brimelow and folks like Sam Francis and Joe Sobran were set out to pasture. They ditched John O' Sullivan.

Buckley gave us his "anti-semitism is bad and we have to flush it out of Conservativism, Inc." spiel—and used it as cover to get rid of ideas that have intellectual merit but were not part of the "company line." The neocon take-over started, and I departed ways with NR.

My magazine reading veered over to Chronicles and (occasionally) The American Conservative. NRO was no longer talking ideas but rather looking to enforce ideology—Paleos and Libertarians be damned. (I guess we were the equivalent of the Birchers and Randians.)

What do we have now? Jonah's book-long homage to Godwin's law? There is no equivalent to Russell Kirk or Mel Bradford in the Neocon crowd. I agree with Kirkpatrick 100%—the Neocons sold out to the Beltway for money and position. A pox on them all!