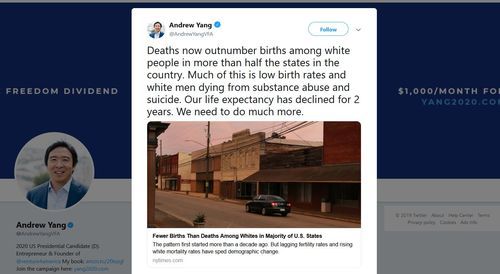 The dark horse candidate of the 2020 Democratic primary is entrepreneur Andrew Yang, who just qualified for the first round of debates by attracting over 65,000 unique donors. [Andrew Yang qualifies for first DNC debate with 65,000 unique donors, by Orion Rummler, Axios, March 12, 2019] Yang is a businessman who has worked in several fields, but was best known for founding Venture for America, which helps college graduates become entrepreneurs. However, he is now gaining recognition for his signature campaign promise—$1,000 a month for every American. 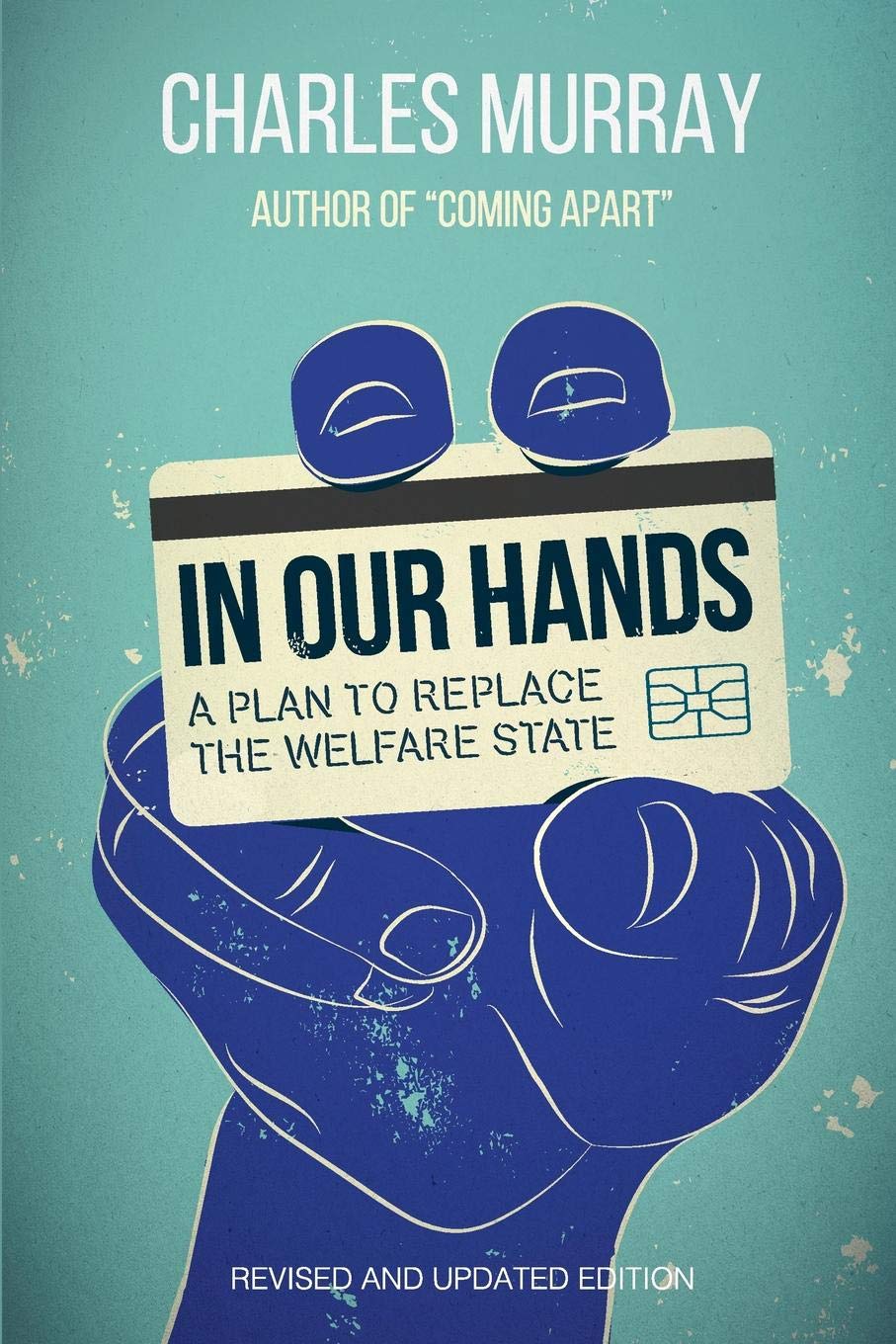 Yang promises a universal entitlement, not dependent on income, that he calls a “freedom dividend.” To be funded through a value added tax, Yang claims that it would reduce the strain on “health care, incarceration, homeless services, and the like” and actually save billions of dollars. Yang also notes that “current welfare and social program beneficiaries would be given a choice between their current benefits or $1,000 cash unconditionally.”

As Yang himself notes, this is not a new idea, nor one particularly tied to the Left. Indeed, it’s been proposed by several prominent libertarians because it would replace the far more inefficient welfare system. Charles Murray called for this policy in 2016. [A guaranteed income for every American, AEI, June 3, 2016] Milton Friedman suggested a similar policy in a 1968 interview with William F. Buckley, though Friedman called it a “negative income tax.”

He rejected arguments that it would cause indolence. F.A. Hayek also supported such a policy; he essentially took it for granted. [Friedrich Hayek supported a guaranteed minimum income, by James Kwak, Medium, July 20, 2015]

It’s also been proposed by many nationalists, including, well, me. At the January 2013 VDARE.com Webinar, I called for a “straight-up minimum income for citizens only” among other policies that would build a new nationalist majority and deconstruct Leftist power. I’ve retained that belief ever since and argued for it here for years.

However, I’ve also made the argument that it only works if it is for citizens only and is combined with a restrictive immigration policy. As I previously argued in a piece attacking Jacobin’s disingenuous complaints about the “reserve army of the unemployed,” you simply can’t support high wages, workers’ rights, and a universal basic income while still demanding mass immigration.

Yang is justifying the need for such a program because of automation. Again,  VDARE.com has been exploring how automation may necessitate such a program for many years. Yang also discussed this problem on Tucker Carlson’s show, which alone shows he is more open to real discussion than many progressive activists.

Yang is also directly addressing the crises that the Trump Administration has seemly forgotten. Unlike Donald Trump himself, with his endless boasting about “low black and Hispanic unemployment,” Yang has directly spoken about the demographic collapse of white people because of “low birth rates and white men dying from substance abuse and suicide.”

Deaths now outnumber births among white people in more than half the states in the country. Much of this is low birth rates and white men dying from substance abuse and suicide. Our life expectancy has declined for 2 years. We need to do much more. https://t.co/zFRAkFY7FU

Though even the viciously anti-white Dylan Matthews called the tweet “innocuous,” there is little doubt if President Trump said it would be called racist. [Andrew Yang, the 2020 long-shot candidate running on a universal basic income, explained, Vox, March 11, 2019]

Significantly, President Trump himself has never once specifically recognized the plight of white Americans.

Of course, Yang has foolish, even flippant policies on other issues. He wants to make Puerto Rico a state. He supports a path to citizenship for illegal aliens, albeit with an 18-year waiting period and combined with pledges to secure the border and deport illegals who don’t enroll in the citizenship program. He wants to create a massive bureaucratic system to track gun owners, restrict gun ownership, and require various “training” programs for licenses. He wants to subsidize local journalists with taxpayer dollars, which in practice would mean just paying Leftist activists to dox people in their communities.

(Though as some have pointed out, with a thousand dollars a month no matter what, right-wingers wouldn’t have to worry as much about being targeted by journofa). Indeed, journalists, hall monitors that they are, have recognized that President Trump’s online supporters are flocking to Yang, bringing him a powerful weapon in the meme wars. (Sample meme at right.) And because many of these online activists are “far right” by Main Stream Media standards, or at least Politically Incorrect, there is much hand-waving and wrist-flapping about the need for Yang to decry “white nationalists.” So of course, the candidate has dutifully done so, claiming “racism and white nationalism [are] a threat to the core ideals of what it means to be an American”. [Presidential candidate Andrew Yang has a meme problem, by Russell Brandom, The Verge, March 9, 2019]

But what does it mean to be an American? As more and more of American history is described as racist, and even national symbols and the national anthem are targets for protest, “America” certainly doesn’t seem like a real country with a real identity. Increasingly, “America” resembles a continent-sized shopping mall, with nothing holding together the warring tribes that occupy it except money.

President Trump, of course, was elected because many people thought he could reverse this process, especially by limiting mass immigration and taking strong action in the culture wars, for example by promoting official English. Yet in recent weeks, he has repeatedly endorsed more legal immigration. Rather than fighting, the president is content to brag about the economy and whine about unfair press coverage and investigations. He already seems like a lame duck.

The worst part of all of this is that President Trump was elected as a response not just to the Left, but to the failed Conservative Establishment. During the 2016 campaign, President Trump specifically pledged to protect entitlements, decried foreign wars, and argued for a massive infrastructure plan. However, once in office, his main legislative accomplishment is a tax cut any other Republican president would have pushed. Similarly, his latest budget contains the kinds of entitlement cuts that are guaranteed to provoke Democrat attack ads. [Trump said he wouldn’t cut Medicaid, Social Security, and Medicare. His 2020 budget cuts all 3, by Tara Golshan, Vox, March 12, 2019] And the president has already backed down on withdrawing all troops from Syria, never mind Afghanistan.

Conservatism Inc., having learned nothing from candidate Donald Trump’s scorched-earth path to the Republican nomination, now embraces Trump as a man but ignores his campaign message. Instead, the conservative movement is still promoting the same tired slogans about “free markets” even as they have appear to have lost an entire generation to socialism. The most iconic moment was Charlie Kirk, head of the free market activist group Turning Point USA, desperately trying to tell his followers not to cheer for Tucker Carlson because Carlson had suggested a nation should be treated like a family, not simply a marketplace.

President Trump himself is now trying to talk like a fiscal conservative [Exclusive—Donald Trump: ‘Seductive’ Socialism Would Send Country ‘Down The Tubes’ In a Decade Or Less, by Alexander Marlow, Matt Boyle, Amanda House, and Charlie Spierling, Breitbart, March 11, 2019]. Such a pose is self-discrediting given how the deficit swelled under united Republican control and untold amounts of money are seemingly still available for foreign aid to Israel, regime change in Iran and Venezuela, and feminist programs abroad to make favorite daughter Ivanka Trump feel important. [Trump budget plans to give $100 million to program for women that Ivanka launched, by Nathalie Baptiste, Mother Jones, March 9, 2019]

Thus, especially because of his cowardice on immigration, many of President Trump’s most fervent online supporters have turned on him in recent weeks. And the embrace of Yang seems to come out of a great place of despair, a sense that the country really is beyond saving.

Yang has Leftist policies on many issues, but many disillusioned Trump supporters feel like those policies are coming anyway. If America is just an economy, and if everyone in the world is a simply an American-in-waiting, white Americans might as well get something out of this System before the bones are picked clean.

National Review’s Theodore Kupfer just claimed the main importance of Yang’s candidacy is that it will prove meme-makers ability to affect the vote count “has been overstated” [Rise of the pink hats, March 12, 2019]. Time will tell, but it is ominous for Trump that many of the more creative and dedicated people who formed his vanguard are giving up on him.

Ineligible for Affirmative Action, targeted by blisteringly hostile media for defunding and deplatforming, and utterly unrepresented by Conservatism Inc., to these people a thousand dollars a month seems like something more tangible than anything President Trump has offered.

If you are doomed, despite your best efforts, to watch the destruction of your country and civilization, you might as well be paid to do it.