WashingtonPost: "'How Dare You Work on Whites': Professors Under Fire for Research on White Mortality"

‘How dare you work on whites’: Professors under fire for research on white mortality

Academic research rarely goes viral, but this past year, the work of Princeton professors Anne Case and Nobel laureate Angus Deaton became the center of a national fascination over the woes of white America. It’s also landed the two in the crossfire of a debate about race and the lack of attention given to problems faced by African Americans. 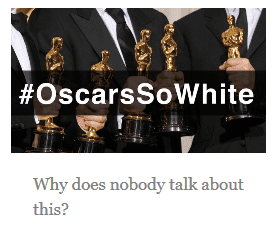 Look how lacking was the attention to the problem faced by African Americans that black movie stars traditionally only win a representative share of Oscars rather than more than their share.

Do you realize this country went two entire years, 2015 and 2016, between black movies winning the Best Picture Oscars in 2014 and 2017? Now that’s a crisis! In contrast, the White Death only took 15 years before the media noticed all those tens of thousands of whites dying unexpectedly. That’s because of White Privilege.

In 2015, Case and Deaton pointed out that mortality rates among middle-aged white Americans have been rising, while mortality rates for other Americans and citizens of Western Europe have continued to plummet. Two weeks ago, the researchers released a deeper report probing the underlying reasons. Opioid abuse and alcoholism and a spike in suicides have been the most visible causes, but Case and Deaton say these “deaths of despair” are symptoms of a much larger problem — one that’s rooted in the economy, and how forces like technological change have battered less-educated whites in recent decades.

But the economy has been brutal lately for all Americans without a college degree, and this new report kicked off another round of controversy over how the American mainstream often ignores black experiences. Critics have complained that Case and Deaton’s focus on white mortality risks drawing attention away from equally pressing problems, like the persistently higher rates of black mortality.

Many of these objections have to less to do with the actual science and more to do with the context in which it was published. President Trump won huge swaths of voters in 2016 by promising to address the grievances of the white working class, and white nationalists endorsed his campaign. Case and Deaton’s research on white mortality seemed to speak directly to that political narrative: Not only were white Americans suffering from their own problems, but they were also literally dying out faster in middle age.

Yet African Americans have long suffered higher mortality rates and lower levels of happiness. In light of the divisive racial rhetoric surrounding the Trump campaign, some worried that the interest in Case and Deaton’s research would only heighten the sense that African Americans were being erased from the national conversation.

…The following is an edited and condensed transcript of our chat.

Guo: I wanted to discuss this question about whether we are neglecting African Americans with all of our focus on white mortality. …

Case: It’s not as much news if people’s mortality rates are falling the way you would hope they are falling. What seems like news is when mortality has stopped falling, and no one has noticed that it has stopped.

Deaton: Anne presented the first paper once and was told, in no uncertain terms: How dare you work on whites.

Case: I was really beaten up.

Deaton: And these were really senior people.