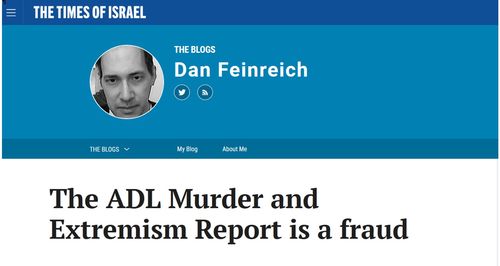 TIMES OF ISRAEL Blogger: "The ADL Murder And Extremism Report Is A Fraud"—Which Is What We Said About Last Year's Report 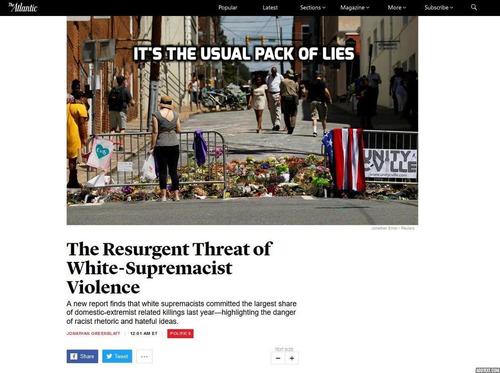 See, earlier, by James Fulford: The ADL Report On "White Supremacist" Killings Is The Usual Pack Of Lies, Remarkable For What It Ignores, January 17, 2018

Dan Feinreich, a blogger at the Times of Israel, has tossed and gored the latest ADL Report on "domestic extremism".

On January 23, 2019, the Anti-Defamation League (ADL) released a report on “Murder and Extremism in the US in 2018.”
On twitter, they stated that “right-wing extremists committed nearly every extremist murder in 2018.”
“The facts … in our new report are chilling.”

The report was issued by the ADL’s Center on Extremism (COE) and claims to track all murders perpetrated by “extremists” and that “every extremist killing … had a link to right-wing extremism.”

The report is a complete fraud.

The ADL Murder and Extremism Report is a fraud,January 29, 2019

Many of the victims of these "extremists" were white. One white criminal in Texas killed four people in his own family (the same color as him) and is included because he was said to have had "white supremacist" connections in prison. They also include the Parkland murders by Nikolas Cruz who killed 17 people—mostly whites, and not for ideological reasons.

Since there was evidence that Cruz has made racist comments online, had an interest in white supremacy, and drew swastikas on his personal belongings, this incident is included in the report, even though the murders themselves were not considered ideological or racially motivated, since 9 of the 17 victims were non-Jewish whites.....

There are other examples of whites, considered to be right-wing extremists, who killed family members or acquaintances that were also white. In fact, nearly half of the 50 murder victims in the report were white.

So a white man who murdered 4 of his relatives is included in the same listing as the anti-Semitic synagogue shooter who murdered 11 Jews. How is this information useful? 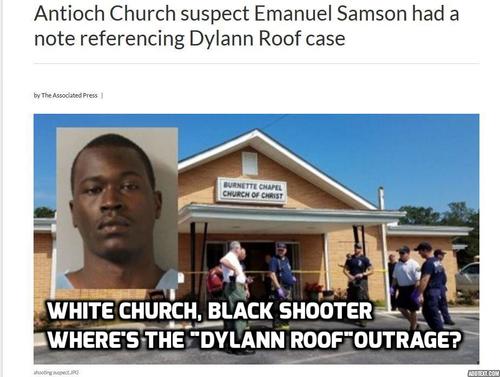 Well, it might be useful for fundraising, or for getting laws passed. In 2017, I noted that while the ADL listed Dylann Roof as a "domestic extremist", they didn't list any of the "immigrant mass murders" or "disgruntled minority massacres" that we track. For example, they didn't list the Emanuel Kidega attack on a white Tennessee Church, athough that attack was the precise mirror image of the Dylann Roof shootings. Most of the victims in the 2017 cases below were white, most of the attackers minorities.

Apparently it doesn't count as "domestic-extremist" murder if it's just normal minority violence.