VDARE Radio: How VDARE.com Laid Out The Strategy For Trump’s Victory

One of the most frustrating things since the election has been watching pundits and talking heads expressing confusion about how Donald Trump’s victory could possibly have happened. Of course, if you are a longtime reader of VDARE.com, you feel no confusion.

What could persuade more white union families to vote Republican when the current AFL-CIO leadership is so leftist? Here’s a suggestion. The labor bosses are selling out their old time members' interests in order to try to pad their membership with immigrants, legal and illegal. That's why the AFL-CIO supremos recently called for another amnesty for illegal immigrants.  Immigration should be the perfect issue for the GOP to use to split the rank and file from their Democratic bosses.

You would think that being right about literally everything in terms of how to create an entirely new political coalition would lead to us at least getting a toehold in the mainstream. Instead, it seems like the Narrative Policing from the mainstream media has only intensified since President Trump was inaugurated. Even with President Trump in the White House, leftists are doing their best to choke off funding from websites like Breitbart, having already gotten Google Ads to stop working with us.

Even as we move closer to the center of American politics in terms of affecting the debate, we are being moved further away by those who want this society of ours to have to keep living by lies.

Still, VDARE.com has a huge impact because we push the whole debate in our direction. The ideas you see here end up being filtered through a whole series of institutions, eventually percolating into “mainstream.” I jokingly call it ideology laundering.

There was an interesting sign of our impact in a recent piece on Kellyanne Conway.

Conway is really a political strategist more than a spokesperson. She should be taken seriously because unlike all the so-called experts in the Beltway Right, she knew that pushing for amnesty was absolutely the worst thing the Republican Party could do after its 2012 defeat.

An article in The Atlantic calling Conway “The Unsung Architect of Trumpism” notes:

Years before Conway went to work on Trump’s campaign—when she was still a midlist conservative pollster and Steve Bannon was still running Breitbart—the two were charter members, Bannon recently told me, of the “cabal” he was forming behind the scenes to upend the Republican establishment. And Conway’s ideas were the key to a major shift in the way Trump addressed immigration, which became his signature issue. One Conway poll in particular—a little-noticed 2014 messaging memo commissioned by a controversial anti-immigration group—Bannon cited as a sort of Rosetta stone of the message that powered Trump’s victory. It was, Bannon told me, a pillar of “the intellectual infrastructure of the populist movement that candidate Trump galvanized” from the moment he began his candidacy in 2015.

The article lays out a number of developments, really all of which had to take place for Donald Trump to have been elected. Additionally:

VDARE.com helped create the intellectual climate which enabled all of these things. I don’t think it is even debatable – if VDARE.com did not exist, Donald Trump would not be in the White House. I really like Kellyanne Conway, but if you are looking for the real Unsung Architects of Trumpism, look no farther than Peter Brimelow and Steve Sailer. 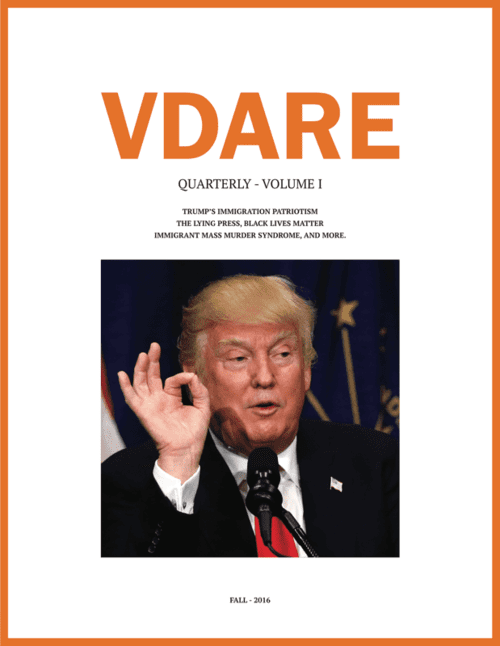 After all, it was Peter Brimelow who predicted the entire course of the 2016 campaign better than anyone when he said, “it would only take one speech.”

Of course, VDARE.com will never get the credit from the mainstream media.

That’s why we rely so heavily on you, our readers. VDARE.com is not just a website, but the spearhead of a movement and the basis of a community. To that end, we are rolling out more initiatives to get you more involved with us. Already, the print publication VDARE Quarterly is flying off the shelves. If you haven’t subscribed yet, please visit vdare.com/vdare-quarterly to sign up. Soon, we will be announcing a new conference, and a book club. And of course, keep your ears to the ground about local meetups.

Join us, and we can all be right about literally everything, together.