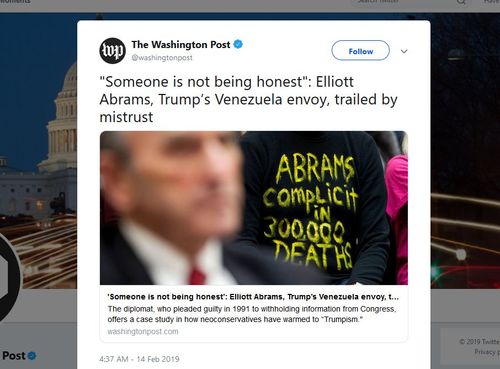 I have been jolted out of my somnolence by The Daily Beast’s jeering story Trump Admin Weighs Shielding Venezuelan Migrants From Deportation by Betsy Woodruff, February 19, 2019.

Senior officials at the State Department have been seriously weighing whether to push to protect Venezuelans in the U.S. from deportation, according to internal communications The Daily Beast reviewed….

But extending the policy to Venezuelans would be an atypical step for the Trump administration, which has taken steps to end TPS for people from half a dozen other countries. Some Trump administration allies consider the move tantamount to granting “amnesty” to those who have violated immigration laws.

Elliott Abrams, Trump’s special envoy for Venezuela, has participated in the discussions…

Any overseas mess to Abrams seems to be a chance to flood the Historic American Nation with culturally and frequently intellectually incompatible masses.

Peter Brimelow once penned a characteristically too generous and chivalrous comment on Abrams.

I prefer the late Larry Auster’s assessment of the type.

WHY IS THIS CREATURE IN THE TRUMP ADMINISTRATION?

Camp Of The SaintsDiversity Is StrengthVDARE.com Told You So Dept.
<< Previous
Next >>
LATEST