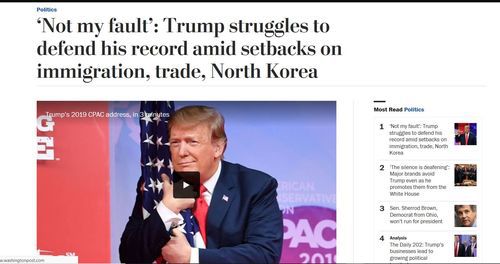 When it comes to squishiness on immigration, the Trump Administration is now setting the pace. Every week brings news of some new concession to the business lobbies on legal immigration.

I don't have to go looking for these stories. They pop up every few days. Washington Times, March 29th: DHS to double seasonal guest worker increase (by Stephen Dinan) The story tells us that Homeland Security Secretary Kirstjen Nielsen has approved an extra 30,000 seasonal guest worker visas. That's 15,000 extra over last year's increase.

This increase also comes earlier in the season, which, the report tells us, "will give employers more time to apply and plan." Well, isn't that nice for them.

Secretary Nielsen is just as worthless on illegal immigration. She showed up on Tucker Carlson's show earlier this week to talk about the tens of thousands of Central Americans coming across our southern border without authorization every month and being released into the U.S.A.

Clip: Carlson: "How about this: Why wouldn't your agency write an executive order, present it to the President, have him sign it, and do it tomorrow?"

Nielsen: "Everything is on the table. We'll do everything we can within our authorities (sic)."

Carlson got the same answer on the birthright citizenship executive order the President offered us before last November's elections.

[Clip: Nielsen: "Y'know, Tucker, I think the President's been clear: All of that is on the table."]

E-Verify, birthright citizenship, visa tracking, stop remittances (or at least tax them), … "All of that is on the table."

And that's where it sits—on the table, turning brown and curling up at the edges like last week's sandwich.

Madame Secretary, with respect: "On the table" butters no parsnips. Americans are not impressed by things lying uselessly "on the table." We want action—clear, decisive action, like your directive the other day to import 30,000 foreigners to do seasonal work—but we want action for American workers, for American sovereignty, for a demographically stable nation to bequeath to our grandchildren.

When shall we see that clear, decisive action, Madame Secretary?

But note that immigration patriots are at least getting rhetoric from Trump—more than they would have gotten from any random Bush. I am under orders not to repeat that We Are Doomed too often on VDARE.com. And there is a Big Picture development that transcends Trump trivia.

What actually divides our two main parties? We know of course that Republicans are the Stupid Party while Democrats are the Evil Party; but what are the substantive issues that really separate them?

This has of course varied across historical time. The Republican Party started out sectionalist, as the anti-South Party. They'd prefer me to say "anti-slavery," and to be sure abolitionists had a home in the early party; but so did Free Soil advocates, who just didn't want slavery expanded into new territories but many of whom were indifferent to slavery as a moral issue.

The impression you get from contemporary sources is that most pre-Civil War Republican Party voters wanted blacks to stay in the South, preferably but not necessarily as free citizens; or else be shipped off to black colonies in Africa or the Caribbean.

If a Donald Trump had shown up in 1860 promising to build a wall around the slave states, I bet he'd have won in a landslide.

After the Civil War the GOP coasted along for a while as the Party of Victory in that war, then morphed across the turn of the 20th century into the party of capitalism, most especially of the small businessman and his beloved tariffs, while the Democrats drifted leftwards into progressive social reform. The sectionalist stamp was still strong, though, with Democrats solid in the old Confederacy down to the 1960s.

With the great expansion of higher education and knowledge work after WW2, meritocratic elitism began to rise, bearing aloft the standard of essentialist egalitarianism, most especially of race and sex denialism.

This "New Class" easily took over the Democratic Party. Its rise stirred a reaction, though: Richard Nixon's "Silent Majority," Donald Warren's "Middle American Radicals." The old South, where meritocratic elites were thinner on the ground and race realism was strong, swung Republican.

This was a new kind of sectionalism, the beginnings of what I call the Cold Civil War. The sectionalist line no longer cuts cleanly across the nation: it now separates one county from the next, one city district from the next. It cuts through neighborhoods and streets, even through individual families.

That's the history of the two big parties in a nutshell—familiar to all of us, I think.

OK, but what's the key defining issue today? What, more than anything else, separates the two parties? Immigration, that's what.

Back in February, during the congressional fight over funding for Trump's wall, I went to NumbersUSA and looked up the immigration score cards on all the members of the House Appropriations Committee with a voting record. I tweeted out the result.

Executive summary: The 23 Republican members had a spread of ratings, from two members rated A down to one rated F-minus. The median rating for Republicans was B-minus.

Of the 29 Democratic members, one was rated D and two were rated F. The other 26 were all, every one of them, rated F-minus.

B-minus is not actually very impressive from an immigration-patriot point of view. There's considerable squishiness over immigration on the Republican side, due of course to big-money business donors looking to imported workers to keep wages down.

It's the defining issue between the parties in our age. We may as well call them the "Immigration Control Party" and the "Open Borders Party."

It’s a tectonic shift that seems to be happening regardless of what the Trump Administration is actually doing.

Finally some good news: Down in the antipodes, ripples from the March 15th mosque massacres in New Zealand continue to spread out.

Brenton Tarrant, who committed those massacres, is actually an Australian; so the event generated even more interest in Australia than it would have anyway. That interest has brought forth a hero: Sixty-nine-year-old Fraser Anning, who has a seat in the 76-member Australian Senate.

Senator Anning is … I think the word is "colorful." He is plain-spoken and straightforward in what we used to consider a classically Australian style, although in recent decades the loathsome turbid waters of Political Correctness and feminized sensitivity have risen and drowned much of the cultural landscape Down Under.

Anning is culturally conservative: hates homosexuality and abortion, opposes multiculturalism, and—you may want to position yourself near the fainting couch for this one—in his maiden speech to the Senate last year, called for a referendum on re-introducing the White Australia policy that his country practiced up to the 1970s. That policy limited permanent settlement of immigrants to white people.

Senator Anning responded to the New Zealand killings by saying

As always, left-wing politicians and the media will rush to claim that the causes of today's shootings lie with gun laws or those who hold nationalist views but this is all cliched nonsense.

The real cause of bloodshed on New Zealand streets today is the immigration program which allowed Muslim fanatics to migrate to New Zealand in the first place. Let us be clear, while Muslims may have been the victims today, usually they are the perpetrators.

That had them reaching for the smelling salts from Brisbane to Perth, from Bunda to Wagga Wagga, from Kalgoorlie to Kookaburra Springs.

There were condemnations, a motion of censure in the Senate, and a petition to remove Fraser Anning from the Senate (although there is apparently no constitutional way to do that).

One young chap was so incensed he snuck up behind the Senator in public and broke an egg over his head. Senator Anning span round deftly and bopped his assailant very accurately on the jaw, twice.

Nothing abashed, this week Senator Anning registered a new party, Fraser Anning's Conservative National Party. He also published a spirited open letter to the Australian Prime Minister—you can read it at the Occidental Observer,  on Facebook, or at Australia’s Pickering Post—defiantly asserting his objections to mass Muslim immigration:

It is a matter of causation, not moral blame, that until recently we were largely immune to this problem because until the 1970s Western populations were, for the most part, ethnically, culturally and religiously homogenous.

I believe that these changes were initiated by governments, not requested by the people, who generally wished to retain their way of life, as did others around the world.

The Japanese people have no wish to bring in millions of Vietnamese and grant them citizenship. The Chinese don't want to be swamped with Indians.

No people wish for this. We didn't vote for it and we weren't asked.

You can take issue with Senator Anning's bluntness, and even with his arguments. I, for example, would take issue with his saying that Australians didn't vote for mass immigration and weren't asked.

It is true that in Australia, as here and in Britain, all the big old political parties, with various degrees of honesty, promoted mass Third World immigration. It's also true that there are difficult institutional barriers to getting a new party established.

Still, no-one has to vote for the established parties.

I was about to add: "indeed, no-one has to vote at all …" Then I remembered that Australia does in fact have mandatory voting, with a $20 fine if you fail to vote—not a bad idea, in my opinion. [How Compulsory Voting Works: Australians Explain, by Tacey Rychter, NYT, October 22, 2018]

Still, there must have been minor parties people could vote for that didn't push mass immigration. Or voters could have staged a strike—a voter strike!

Yet Aussies—like Americans and Brits—went on voting for the major parties. In that default sense, contra Senator Anning, we did wish for it; we did vote for it.

But see what I'm doing there: I'm arguing back, as cogently as space and my abilities permit, against Fraser Anning's points, which he has very cogently expressed.

That's what's supposed to happen in a free, self-governing society. We make our points and argue them in public. The one who persuades the most listeners advances to the next round.

Australia's elites are having none of that! They are laboring mightily to silence Senator Anning, just as their counterparts here are laboring to silence dissident voices like ours here at VDARE.com.

In order to lock-in permanent mass immigration, you multicultural elitists have annihilated the bedrock principle of Free Speech from our society.

This is the foundational principle on which our system of democracy is built.

That was the point where I stood up and cheered.

Strength to your arm, Senator—and to your pen.

If you ever find yourself out here on Long Island, the Fosters are on me.