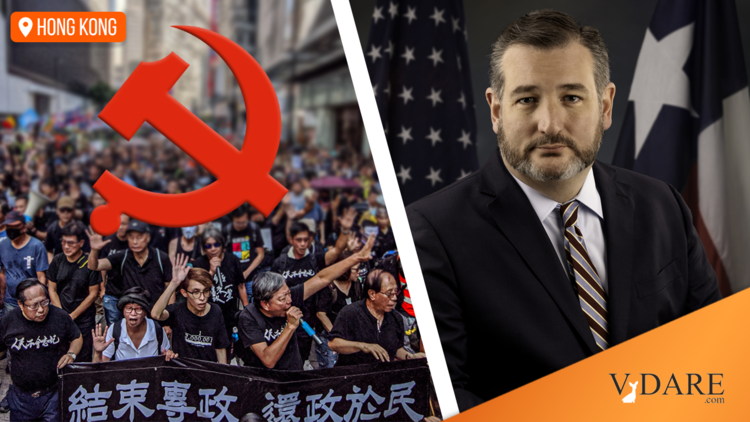 Thanks to the lone opposition of Texas GOP Senator Ted Cruz, a bill that would have allowed tens of thousands of Hong Kongers to move here failed in the Senate last week [Hong Kong activists silent after US Senator Ted Cruz blocks bill giving special refugee status to dissidents, by Owen Churchill, South China Morning Post, December 19, 2020]. The House of Representatives had passed the bill by unanimous consent, which is what its boosters, including the usual GOP suspects, expected to do in the Senate. But Cruz boldly said no, and for good reason. The GOP Establishment claimed the bill would be a blow against Chinese Communism, but in fact it would have opened the door not merely to more Chinese espionage (Cruz’s stated objection) but also to continued swamping of the Historic American Nation. The real way for the U.S. to respond to China:  stop immigration from the Middle Kingdom. But cheap-labor Business-First Stupid-Party Republicans are, well, too stupid to get it.

The Hong Kong People’s Freedom and Choice Act should never have received any GOP support. It would have given “Temporary Protected Status,” an immigration quirk President Trump wants to end, to any Hong Konger who sought it. Obvious result: a gazillion more Chinese here, many never to leave.

Of course, TPS is intended to last for no more than five years, but thousands of TPS recipients simply hang on indefinitely (with Democrat help). And the potential for Beijing to put even more secret agents into universities and corporations was nearly limitless [There Would Be Nothing Temporary About TPS for Hong Kong Residents, by Dan Cadman, Center for Immigration Studies, December 7, 2020].

Disgracefully, and sadly indicative how far immigrant patriots have to go to penetrate the GOP mindset, six Republicans cosponsored this bill in the House, including stalwart conservatives Ted Yoho of Florida and Joe Wilson of South Carolina [H.R.8428 - Hong Kong People's Freedom and Choice Act of 2020] But the lead GOP sponsor, Illinois Rep. Adam Kinzinger, is a vocal Never Trumper:  “Throughout history, from Iran to the Soviet Union, the United States has looked out for persecuted populations looking for basic human freedoms,” he said. “[T]hese actions are a clear first step at ensuring innocent men, women, and children do not need to live in fear under the hand of this communist regime.”

How this posturing helped a single constituent in Illinois-16, Kinzinger’s district, is unknown.

In the Senate, Connecticut’s Richard “Stolen Valor” Blumenthal hoped to pass the bill by unanimous consent. Just one senator needed to object. But that was Cruz, who stood up for Americans on the Senate floor. Cruz also offered a bracing attack on Open Borders and Chinese duplicity: espionage under the guise of student and business exchanges:

House Democrats made a cynical decision to try to exploit the crisis in Hong Kong to advance their long-standing goal on changing immigration laws. ... [O]ur Democratic colleagues embrace Open Borders. Their preference is to make all immigration legal. This bill advances that long-time, partisan political agenda.

Cruz proposed the Senate take up his own bill that would target Hollywood for its complicity in Chinese tyranny.

The bill would have set a precedent for letting in all China’s oppressed: Uighurs, Tibetans, and Mongolians. Millions would receive TPS.

Of course, the ChiComs would be more than happy to dump their angry minorities on us; it’s easier than rounding them up and shooting them. TPS for the Hong Kongers would be Fidel Castro’s Mariel disastrous boatlift on steroids.

If anything, it’s time to stop immigration from China. Prior to the Coronavirus outbreak, China produced the most immigrants to our country every year. At 2.5 million-strong, Chinese are the third largest foreign-born population in America [Chinese Immigrants in the United States, by Carlos Echeverria-Estrada and Jeanne Batalova, Migration Policy Institute, January 15, 2020].

Many, again, are spies. The Communist regime obliges all of its citizens to provide intelligence [The Unpleasant Truth About Chinese Espionage, by John R. Schindler, Observer, April 22, 2016]. Chinese immigrants in the U.S. also turn out to be Leftists. Seventy-three percent picked Hillary Clinton in 2016. [The Asian American Vote 2016: A Report by the Asian American Legal Defense and Education Fund, AALDF, 2017] And 56 percent were set on Joe Biden before the election (only 20 percent considered voting for Trump this year) [How Asian Americans Are Thinking About The 2020 Election, by Dhrumil Mehta, FiveThirtyEight, September 18, 2020].

One more thing. In October, when a federal court ordered Immigration and Customs Enforcement to release more than 200 criminal illegal aliens from a detention facility in California, 19 were Chinese [California ruling forces ICE to release criminal aliens from detention in Adelanto, ICE.gov, October 27, 2020]. Fifteen had final orders of deportation.

Why import more of these hostiles who, when they obtain citizenship, vote for hard Leftists?

Thankfully, some Republicans beside Cruz have tackled ChiCom immigration. Thus the Senate recently passed the horrible Fairness for High-Skilled Immigrants Act, which VDARE.com more accurately calls the Indian Overclass Importation Bill. It gives 90 percent of professional employment-based green cards to Indians over the next 10 years.

But it now contains an important restriction thanks to Florida Senator Rick Scott. He wouldn’t let the unanimous consent motion move forward until It barred green cards for Chinese with ties to the Communist Party.

The butthurt Asian lobby, of course, calls the restriction a new “Chinese Exclusion Act” [Asian American groups oppose anti-Chinese ‘xenophobic language’ in S.386, by Arun Kumar, The American Bazaar, December 17, 2020]. But given the circumstances these days, that would actually be a good idea.

That aside, Scott won’t budge. If the House and Senate versions aren’t reconciled, Scott might have doomed the Indian green-card giveaway.

Fixing the language isn't that hard. But I understand Senator Scott is being obstinate and refusing modifications. 3

Hearing 1044/386 isn't going to be in the omnibus because Scott refused to budge. Seems like it's over until next year. The good news is Biden has ending country caps in his immigration plan (along with early adjustment and expanding green card numbers for everyone).

The Trump administration is also targeting Chinese immigration. In early December, the administration announced that non-immigrant business and tourist visas for ChiComs would expire after one month instead of 10 years [United States imposes visa curbs on members of Chinese Communist Party, by Ted Hesson and David Brunnstrom, Reuters, December 2, 2020]. In September, the administration revoked more than 1,000 Chinese student visas due to security concerns [US revokes visas for 1,000 Chinese students deemed security risk, BBC, September 10, 2020].

It’s a good start, but more must be done. In 2019, about 370,000 Chinese students were in the U.S. [Data show Chinese students are steering clear of the US, by Dan Kopf, Quartz, October 28, 2020]. That’s a little less than the population of Cleveland, Ohio. And it has to stop. We have no reason to educate the enemy or permit him to spy on us.

Yet the GOP’s baiting China over “freedom” and immigration has another problematic dimension: the abiding concern among Republicans for censorship for or by the ChiComs.

During the summer, Missouri Sen. Josh Hawley and several others raised a huge fuss over the NBA not making customizable #FreeHongKong jerseys [Sen. Josh Hawley blasts NBA for pulling custom gear following ‘Free Hong Kong’ uproar, by Joseph Wulfsohn, Fox News, July 16, 2020]. This issue affected zero Americans. But Hawley suggested that the survival of civilization depended on basketball jerseys. He got one, but shockingly, the NBA is now no less left-wing.

At the same time, the NBA endlessly promoted Black Lives Matter and its anti-white, anti-American agenda [How the NBA’s social justice efforts dominated the season, Marc J. Spears, The Undefeated, October 12, 2020]. That’s far more relevant to Americans, but Hawley & Co. ignored it. Freedom for Hong Kongers is what mattered.

Likewise with Tennessee’s Marsha Blackburn. She attacked China’s lack of free speech with a tweeted photo of Xi Jinping as Winnie the Pooh. “Freedom of speech is being able to tweet this photo of Xi Jinping looking like Winnie,” Blackburn tweeted. “If you did this in Communist China, you’d be arrested.”

Freedom of speech is being able to tweet this photo of Xi Jinping looking like Winnie. If you did this in Communist China, you’d be arrested. pic.twitter.com/0AnVtA3JYM

It’s none of our business.

For Americans, the far more pressing problem is freedom of speech here. Blackburn can proudly tweet the Xi the Pooh, but she can’t question the 2020 election on YouTube. In October, she was forbidden to share the New York Post’s Hunter Biden story on either Twitter or Facebook.

So Blackburn frets about censorship in China, while Leftist censors here target the people who elected her.

Likewise for Hawley. He should be worried about how Facebook censors Show-Me-Staters, not what the NBA says or doesn’t say about Hong Kongers.

Let’s forget about them and the censorship and focus on national security.

China is America’s main global enemy. We have plenty of ways to protect ourselves:

The last thing we should do now is increase Chinese immigration.

Cruz gets it. It’s time for the rest of the Stupid Party to wise up too and close the borders.