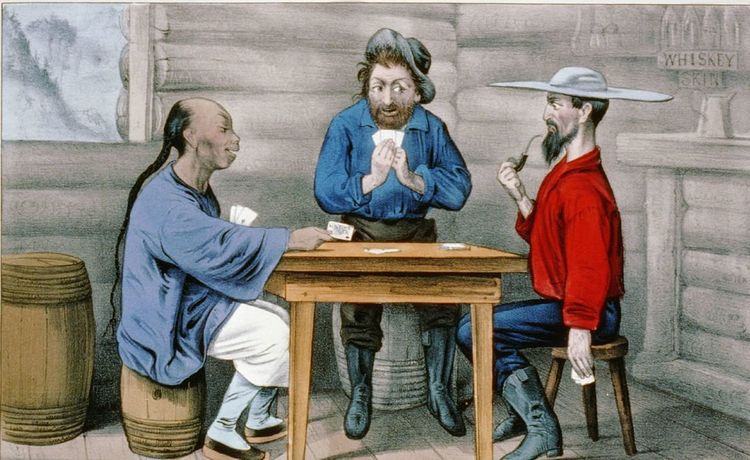 Then I looked up at Nye,

And he gazed upon me;

And he rose with a sigh,

We are ruined by Chinese cheap labor,"

That was Harte's little joke in his famous poem about two American frontier cardsharks, circa 1870, who find themselves out-cheated by a Chinese immigrant gambler.

"Chinese cheap labor" was a common phrase in the 19th century when the labor movement in America was starting up.

Employers would import contract labor from China and elsewhere to break strikes and maintain control of the labor force. The early struggles of American labor were not only against employers—they were also against immigrants.

A progressive historian wrote in New Politics that

"A SPECTER IS HAUNTING AMERICA'S LABOR HISTORIANS: It is the apparition of the Chinese worker. Long gone from his once insecure place in the fields, factories, industries, mines, and railways on the western frontier, as well as from the shoe and cutlery manufactories where he once served as a short-term strikebreaking laborer in the Northeast, the Asian immigrant from what was once called the Middle Kingdom is today being raised from the ignominious grave to which earlier labor historians had consigned him. But now he serves as a foil in an ongoing debate over whether organized labor's history contains a rich heritage of left-multiracial virtues or a clandestine legacy of right-racist vices." [ The "Chinese Question" and American Labor Historians Stanford M. Lyman [New Politics, Winter 2000]

Unprogressive readers may choose to reverse the virtues and vices in that statement, but it's a fact that by 1897, President McKinley had appointed Terence V. Powderly, founder of the Knights of Labor, as his Commissioner of Immigration, charged with enforcing, among other things, the Chinese Exclusion Act. Powderly was succeeded in office by two other labor leaders.

Apparently, in the nineteenth century, the government had come to the realization that labor had a certain stake in immigration matters.

Fastforwarding to the 21st Century, the Bush Administration has tried appointing first James Ziglar, a man who didn't believe that deporting illegal aliens was "practical or reasonable" and then Eduardo Aguirre, who Michelle Malkin called "Another Clueless Banker."

Modern day labor unionism is frequently associated with far-left politics, subsidized by compulsory dues. The labor unions, if asked why a Republican working man is being asked to subsidize Democratic pols, will reply that Democrats in office will be more likely to give in to the unions on special privileges for union labor, and thus serving the members economic self interest.

The dissenting conservative union member might point out that issues like missile defense, gun control, crime control, et cetera, are more important than economic issues, since they involve life and death.

However, on the immigration issue, this dissenting conservative union member loses twice: the deformation professionelle that turns union leaders from the shop steward up into leftist ideologues means that they have decided in favor of mass immigration—partly because they think it's the right thing to do in "social justice" terms, and partly because they want to shore up their declining membership with foreign workers.

In the meantime, that hypothetical conservative union member, if he got his union dues back from his left-wing labor leaders, wouldn't find a lot of support for his immigration concerns in the modern Republican Party…would he?

Happy Labor Day to all our readers, and here's some of the work we've done on Labor Days past: