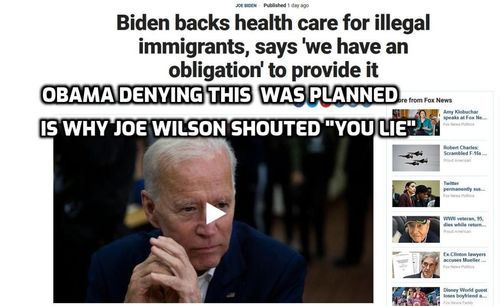 Earlier: "Moderate" Joe Biden: US Has "Obligation" To Provide Health Care For Illegals

In 2009, Joe Biden's boss, President Obama made a speech on what's now known as Obamacare before a joint session of Congress. He started by calling conservatives liars over the potential of socialized medicine to kill people. The he told a lie, and Representative Joe Wilson,R-S.C., called him on it:

Some of people's concerns have grown out of bogus claims spread by those whose only agenda is to kill reform at any cost. The best example is the claim made not just by radio and cable talk show hosts, but by prominent politicians, that we plan to set up panels of bureaucrats with the power to kill off senior citizens. Now, such a charge would be laughable if it weren't so cynical and irresponsible. It is a lie, plain and simple. (Applause.)

There are also those who claim that our reform efforts would insure illegal immigrants. This, too, is false. The reforms -- the reforms I'm proposing would not apply to those who are here illegally.

And Obama was lying. Ann Coulter wrote at the time:

Every single American knows it's a lie. But liberals take pleasure in repeating it — and then condescendingly accusing anyone who doesn't accept their lie of being a toothless, illiterate racist."

Of course, that was the problem: Obama is black, therefore shouting at him is racist. Everything is racist, if Republicans do it. I explained this in 2011:

When President Obama told a direct lie in a speech to congress, and Congressman Joe Wilson shouted "You lie!" Maureen Dowd wrote in the New York Times "But, fair or not, what I heard was an unspoken word in the air: You lie, boy!" [Boy, Oh, Boy , September 12, 2009]

"This, more than anything else, is why the idea of an Obama presidency makes me nauseated. Every time he gets criticized (and sometimes when he's complimented) will be another occasion to agonize over the possibility of latent racism in the remark. Thus the well of public discourse will be even more poisoned than before."

He was right. It is.

It's gotten worse since, but remember, what Biden just said about illegals receiving health care is what white people were supposed to apologize to Obama for even suspecting in 2009.

See more "You lied" history below: