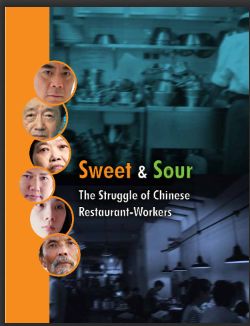 The report to be released Monday finds that some 43 per cent of Chinese workers earned less than the minimum wage, currently set at $11.25. Over half of the respondents reported working more than 40 hours a week, but only 11 per cent of those eligible for overtime pay said they received it.

The majority of workers were also cheated out of their statutory entitlements, the report shows: 61 per cent said their employers denied them public holidays, and 57 per cent said they did not receive vacation pay.

A new study finds some 43 per cent of Chinese restaurant workers earn less than minimum wage while more than half said they worked over 40 hours a week.

If you go to the report itself (section 5.3, page 21, PDF), there is this quote from one of the workers interviewed:

Due to the pool of workers available, including international students, visitors and people without status—some of them I know only receive $3.50 per hour, we are treated as disposable because employers could fire us and easily get replacements. As a result, the minimum standard is being pushed down. People are willing to work for less.

While I sympathize with these workers, I am forced to ask “Why are they in Canada in the first place?” How do native-born Canadians benefit from the presence of large numbers of low-skilled Chinese immigrants who don't speak English well?

It's all well and good for the Star to call on the provincial government to investigate workplace abuses, but governments have limited resources. If Ottawa keeps flooding Canada with up to 300,000 immigrants a year, there will be no way to keep up with all the labor standards violations.

This doesn't just affect newcomers. The presence of vulnerable workers unable to defend themselves makes the job market and workplace conditions worse for native-born Canadians. The Toronto Star, however, isn't interested in that.