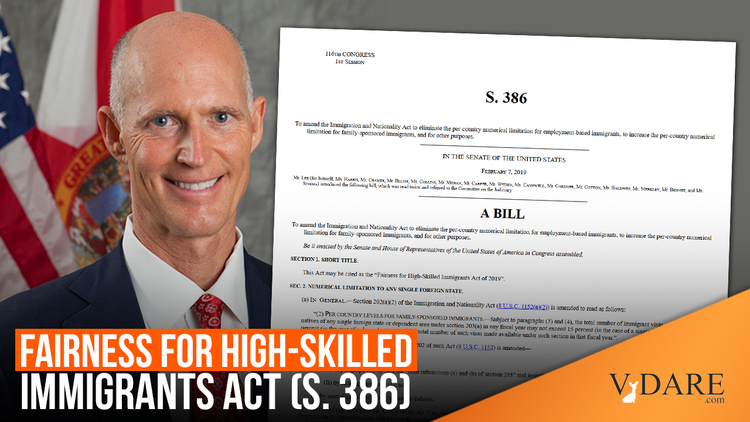 The infamous Fairness for High-Skilled Immigrants Act (S. 386) may finally be dead—for 2020, at least.

Republican Florida Sen. Rick Scott announced his firm opposition to the bill that would scrap visa country caps Monday. Scott previously held up the bill in early August, which made him the target of unhinged attacks from the Indian lobby. In an op-ed for the Miami Herald, the Florida senator explained he opposed the bill primarily because it would hurt “American workers, highly skilled immigrants, workers from Latin America and Europe, as well as Florida’s most important industries” [Immigration overhaul proposal could hurt Florida’s economy, by Rick Scott, Miami Herald, August 31, 2020].

He also attacked the bill’s proponents for wanting to pass it without a proper vote.

Right now the United States Senate is considering a massive overhaul to our nation’s immigration system. And, what is shocking is that it could pass without even a single vote in the United States Senate. You read that correctly: a major change to our immigration system is being considered under “unanimous consent” in the U.S. Senate, which means this bill could pass without a vote ever occurring.

Scott’s concern with the bill’s negative impact on Latin American immigration may have proven the deciding factor, but his opposition ultimately benefits American workers the most. S. 386 would allow Indians to dominate our immigration system. If it passed, over 90 percent of employment-based professional visas would go to Indians over the next 10 years.

Pro-American worker advocates praised Scott for his opposition and said this move likely kills the bill. “That’s a very solid ‘No’ on S.386 … It will be a cold day in a place beneath our feet when he will change his mind,” Kevin Lynn, founder of U.S. Tech Workers, told Breitbart [Rick Scott Torpedoes Mike Lee’s S.386 H-1B Outsourcing Bill, by Neil Munro, Breitbart, August 31, 2020].

It’s surprising that the killing No came from an establishmentarian like Scott rather than one of the aspirational populists in the Senate. Arkansas Sen. Tom Cotton supported the bill, Georgia Sen. David Perdue briefly blocked the bill before backing it, and Missouri Sen. Josh Hawley and Texas Sen. Ted Cruz never said a word about it. Rick Scott bested them all, shockingly enough.

We’ll have to see if Scott keeps up this pro-worker attitude.