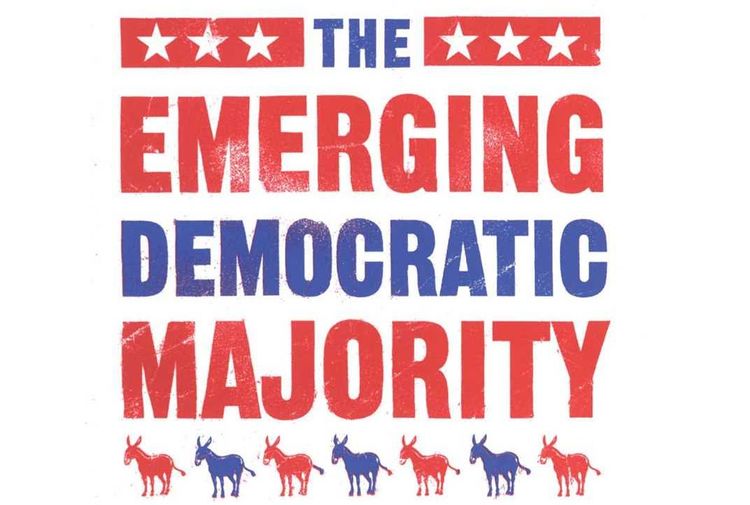 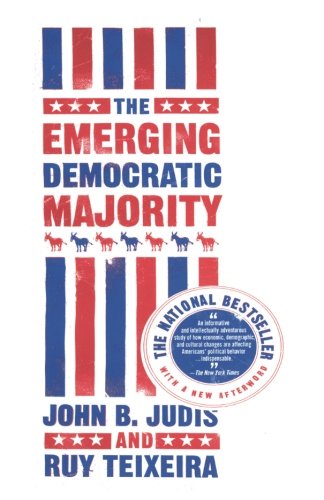 Many of the arguments in John B. Judis and Ruy Teixeira's recent book The Emerging Democratic Majority will be familiar to students of the VDARE.COM School of voting analyses. Indeed, the phrase "The Emerging Democratic Majority" probably first appeared in print as the cover line introducing Peter Brimelow and Ed Rubenstein's 1997 National Review article "Electing a New People." (Curiously, Judis and Teixeira don't mention this, although Judis is a biographer of William F. Buckley.)

Like me, the authors enjoy exploding the complacency of Karl Rove and Michael Barone. They too see Rove's plan to woo minorities, especially Hispanics—volubly endorsed by Barone—as doomed:


Bush did better in his home state of Texas, winning 43 percent of its Hispanic vote. But even there, the broader political trend suggests Hispanics are making the Democratic party their political home. In this year's races for the Texas statehouse and state legislature, Hispanics ran in just four Republican primaries—and lost all of them. By contrast, Hispanic candidates ran in 39 Democratic primary contests and won 35, including the gubernatorial primary…

All in all, Democrats can now count on about 75 percent of the minority vote in national elections. And like other Democratic-leaning groups, minorities are growing rapidly."

(For more detail, compare Judis' & Teixeira's recent summary of their book in The New Republic to my 2001 review of Barone's last book.)

There are many other similarities between their book and my articles (here's my archive). For example, Judis & Teixeira validate my scoop from over a year ago that Hispanics only cast 5.4% of the votes in 2000, not the 7% that is universally cited.

So I naturally turned to their endnotes for confirmation that they'd read my stuff. I found, however, that they exclude all web-only publications from their notes, except for databases.

This has been standard scholarly procedure, but it is clearly obsolete. Endnotes should appear online with live links to source sites. That would benefit readers who don't frequent research libraries.

Still, maybe Judis & Teixeira came up with this all on their own. After all, as I've pointed out about my own articles, it doesn't take a genius to figure this stuff out—just MS Excel and a willingness to face facts.

I'm sorry to say, though, that this plodding, humorless book proved a disappointment compared to their relatively lively TNR essay. If you told me that two human beings could write a book almost solely concerned with candidates and their purported platforms without resorting to any discernible irony, sarcasm, or wit, I would have scoffed. After all, we're talking about politicians!

Sadly, however, The Emerging Democratic Majority proves me wrong.

The only laughs you'll get are from watching J&T suck up to the various Democratic interest groups. For example, they are shocked, shocked that some Republicans have attributed the AIDS epidemic in America to homosexuals. Of course, they don't bother to put forward an alternate theory of causation. Perhaps twin HIV-bearing meteorites crashed simultaneously on Castro Street in San Francisco and Christopher Street in New York?

J&T are brusquer toward minorities (maybe they don't think minorities buy books?). But they are extremely solicitous of white liberals, who want to view themselves as morally superior to white Republicans (those subhuman racist vermin). So J&T refuse to admit throughout the book that blacks commit a disproportionate number of crimes—and that this was crucial to Republican successes from 1966 onward. Instead, they just accuse Republicans of opposing "civil rights."

Civil rights? My late father-in-law was a classical musician, a union organizer and strike leader, and a Democrat. He owned a house in an all-white neighborhood on the West Side of Chicago that was so crime-free that his first grade daughter walked to her school a mile away. Then, blacks began moving in. Committed to integration, my father-in-law joined a liberal Catholic neighborhood group organized to prevent white flight. In 1968, however, his young children were physically attacked three times on the street and, following Martin Luther King's assassination, rioters looted all the shops in the neighborhood.

Ironically, if J&T could have brought themselves to admit the historic role of black crime, then they could have strengthened their case that the Trend is Now the Friend of the Democrats.

At vast cost over the last 40 years, scores of millions of whites have succeeded in largely insulating themselves from black criminals—as my in-laws did. They put locks on their windows, moved to the suburbs, installed surveillance cameras in their stores, hired rent-a-cops, sent their kids to private schools, etc. etc. And they voted for tough-on-crime candidates who passed laws that insulated law-abiding people from crime by putting enormous numbers of bad guys in jail.

This has driven the black-on-white (and black-on-black) crime rate down. Which, paradoxically, poses a problem for the GOP. Just as winning the Cold War in the past isn't going to help conservatives in the future, the Republican partial victory in the Crime War hasn't done anything for voters lately.

1. Of course, J&T are right about minorities, although they acknowledge that will eventually backfire:

"Democrats could suffer from an embarrassment of political riches. As Democrats have gained majorities in cities or states… turf battles have begun to break out among the members of the Democratic coalition. They have pitted blacks against Hispanics or both against whites."

They go on to cite poor Mark Green, a liberal white Democrat who lost the New York mayor's race because he attacked his Puerto Rican primary opponent's main ally, the Rev. Al Sharpton, for … well, for being Al Sharpton. More recently, in the New York Democratic gubernatorial primary, Andrew Cuomo, the son of the former Governor and a Clinton cabinet secretary, ran into the new law of Democratic politics: You can't criticize a minority candidate. He was forced to drop out before the primary election.

But J&T's other favorite categories just don't have the analytical power of race/ethnicity.

2. The idea that the gender gap boosts the Democrats gets publicized because of the media's unspoken assumption that women's votes somehow count (or ought to count) more than men's votes. In reality, the gender gap has proven largely a wash. In 2000, for example, 54% of women voted for Gore, but 53% of men voted for Bush.

The truth is that the more feminized the Democrats become, the more men will flee to the Republicans. Why? Because—let's face it, guys—us real men are prejudiced against anything female-dominated. Look at Hollywood movies: men simply won't go to see "chick flicks" in any numbers. Female buddy movies are extremely rare because they don't make big money. ("Thelma and Louise" was a famous exception that proves the rule.)  If J&T are right in assuming that more women will move into the Democratic Party—which in fact they don't present much evidence for—then more men are likely to move into the Republican Party.

Furthermore, and remarkably, J&T also generally ignore the huge voting gap between married and unmarried women. According to Lena Edlund and Rohini Pande of Columbia University, the emergence of the gender gap is due to the decline of marriage.

Husbands hand money over to their wives. (I've estimated that men give women something like a trillion dollars per year to spend.) Wives vote Republican. Unmarried women tend to look to the government for support. They vote Democratic.

I suppose the rate of marriage will continue to decline. But there are hints that these trends are starting to bottom out. After all, the divorce rate hit its peak over 20 years ago.

3. J&T show that in 1960, professionals were more likely than managers to vote Republican, but by 2000 that had reversed. But this doesn't prove much because J&T are triple-counting their three favorite groups. The professions include many more minorities and women today than in 1960. In particular, the big expansion in government after 1960 created a huge number of at least nominally professional jobs staffed by female minorities, many in what John Gardner calls the "Educartel."

4. J&T hope Democrats will do well among blue-collar whites. But their arguments here seem confused. But it is clear that, although Reagan carried unionized whites twice, the GOP has since let these Reagan Democrats slip away. This could be because the once-vital WSJ Editorial Page strategy of Do Nice Things For The Rich seems to have struck diminishing returns. Lowering the 70% marginal income tax rate in 1981 was a great idea, but eliminating the inheritance tax on billionaires in 2001 might strike the average autoworker as a bit too generous.

Is there anything the Republicans can do? In reality, most of the authors' four pillars of Democratic dominance are shaky.

The gender gap will remain a wash.

Professionals might indeed be a growing sore spot for Republicans, especially if the present coalition of libertarians and lackeys of industry continues to position the GOP as The Party That Hates Nature as opposed to the Teddy Roosevelt conservationist tradition of enjoying vigorous fun the in Great American Outdoors.

Here's an illustrative potential wedge issue: California's liberal Democratic senator Barbara Boxer wants to ban mountain bikers from 2.5 million acres of that state's prime wilderness. The Democrats are on the side of backpackers, a declining Baby Boomer contingent. That opens the door for the Republicans to champion mountain bikers, a growing group of fashionable younger voters.

Republicans can win more blue-collar whites by pandering a little less to the economic interests of the rich. Although cutting back on mass immigration would irritate the wealthy by raising the wages they have to pay their pool guys, it would relieve a lot of the wage pressure on working class Americans.

But minorities are indeed a long-term problem for the GOP. The ranks of black voters will continue to grow, but at a declining rate due to rapidly falling fertility. So immigrant groups are the most obvious long-term threat to the survival of the GOP as a conservative party. Everything depends on future immigration policy.

Of course, J&T simply treat mass immigration in the conventional manner – as a vast natural force like global warming, beyond any human influence.

Yet the embarrassing failures of the Bush-Fox and Daschle-Gephardt amnesty plans show the tide is turning. More and more, Republicans are coming to understand that immigration control is the key to saving their party – and their nation.