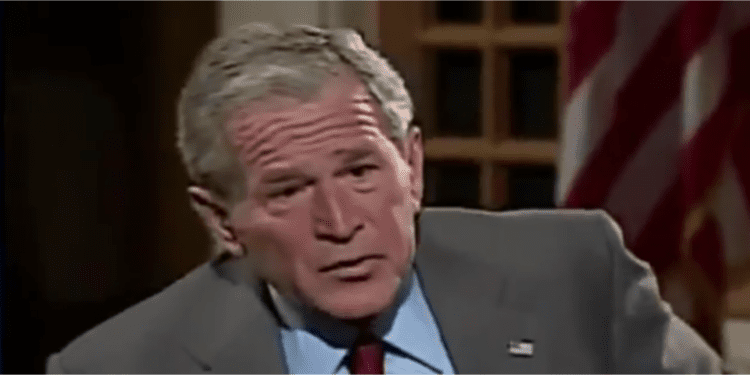 George W. Bush must have been the despair of the history department of every school his daddy managed to get him into.

Consider his latest excursion into the history of the republic, at Southern Methodist, where the Great Man's papers are to be housed.

"What's interesting about our country, if you study history, is that there are some 'isms' that occasionally pop up. One is isolationism and its evil twin protectionism  and its evil triplet nativism. So if you study the '20s, for example, there was an American-first policy that said, 'Who cares what happens in Europe?'... And there was an immigration policy that I think during this period argued we had too many Jews and too many Italians, therefore we should have no immigrants. And my point is that we've been through this kind of period of isolationism, protectionism and nativism. I'm a little concerned that we may be going through the same period. I hope that these 'isms' pass."

First, "America First" was the antiwar movement begun in 1940 and backed by the young John F. Kennedy and his brother Joe, Gerald Ford and ex-president Herbert Hoover. It had nothing to do with the 1920s.

In the Harding-Coolidge decade, America was deeply interested in "what happens in Europe." It began with Hoover rushing U.S. food aid to the defeated nations of World War I and even to the USSR, for which Lenin personally thanked the Americans.

In 1921, President Harding called a Washington Naval Conference that produced the greatest disarmament treaty of modern times, in which America, Britain, France, Italy and Japan agreed to deep cuts and severe limits on the strategic weapons of the day, battleships.

In 1924, Charles G. Dawes advanced the Dawes Plan to ease the reparations burden on Germany, for which he won the Nobel Peace Prize.

In 1927, Coolidge convened a second naval disarmament conference to bring cruisers under the same limits as battleships — but the British balked.

In 1928 came the Kellogg-Briand Pact, by which scores of nations renounced war as an instrument of national policy. Undeniably utopian, it was hardly a mark of an isolationist America.

In 1929 came the Young Plan to further ease a reparations burden on Germany then being exploited by the rising Nazi Party.

"American policy was never more active and never more effective in regard to Europe than in the 1920s. Reparations were settled; stable finances were restored; Europe was pacified, all mainly due to the United States."

What is Bush talking about, and why is he trashing this Republican record like some court historian of FDR?

As for "protectionism", Harding did approve the Fordney-McCumber Tariff Act of 1922, doubling rates to 38 percent. But he also slashed Woodrow Wilson's income tax rates by two-thirds, back to 25 percent.

Result: Unemployment, 12 percent when Harding took office, was 3 percent when Calvin Coolidge left. Manufacturing output rose 64 percent in the Roaring Twenties. Between 1923 and 1927, U.S. growth was 7 percent a year. At decade's end, America produced 42 percent of the world's goods.

Compare this economic triumph with the fruits of W's free-trade policy that wiped out 6 million U.S. manufacturing jobs, one of every three we had, and put America in hock to China.

The protectionism Bush calls "evil" was the policy of 12 Republican presidents from Abraham Lincoln to Coolidge, who made the GOP America's Party and converted this country into the industrial marvel of mankind.

Is Bush oblivious to this? Did someone at Phillips Academy, Yale or Harvard Business School tell him Lincoln, William McKinley and Theodore Roosevelt were free-traders?

As for "nativism", the term dates to the mid-19th century and had to do with hostility to Catholics and Irish, not Italians and Jews.

The 1924 Immigration Act, to end the Great Wave of the previous 30 years from Southern and Eastern Europe, did seek to preserve the ethnic character of the country. Yet, after 40 years of that moratorium, the Melting Pot having done its work, America was more united and socially at peace in the Eisenhower-JFK era than she has been before or since.

Is every immigration restriction law "evil," Mr. Bush? Are Japan and South Korea evil because they have never accepted immigration? Has mass immigration benefited Europe, where David Cameron and Angela Merkel are bewailing the disaster of "multiculturalism"? Is your successor, Gov. Rick Perry, evil for calling for troops on the border to stop the invasion you failed to halt?

For eight years, Bush pursued interventionism, free trade and open borders. Result: two wars that have bled his country and reaped a harvest of hate, the deindustrialization of America and a republic on its way to becoming the new world order's Tower of Babel.

Political result: A wipeout of the GOP in 2006 and 2008, and Bush going home to Texas with the lowest job approval in presidential history.

Bush ought to sue Phillips Academy for educational malpractice.