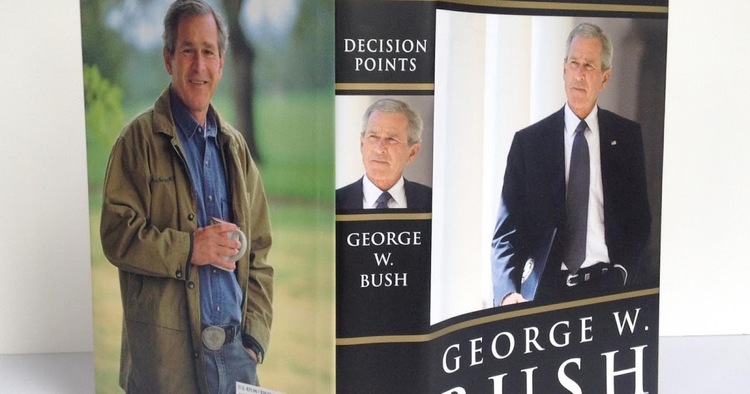 The Fulford File, By James Fulford | Dubya Memoir Shows He Never Understood Immigration (Although His Nanny May Have)

When George W. Bush was 13, his family acquired a nanny:

"She was standing on the doorstep, alone in the rain. She looked tired and scared. A few days earlier, Paula Rendon had said goodbye to her family in Mexico and boarded a bus bound for Houston. She arrived with no money and no friends. All she had was an address, 5525 Briar Drive, and the names of her new employers, George and Barbara Bush."[Decision Points

I can't find any other reviews of Bush's book that talk about Paula Rendon.  I suppose the other reviewers left her alone because she didn't start the Iraq War.

A New York Times story says that Señora Rendon was hired when Barbara Bush answered an ad from a woman "who was seeking sponsorship in return for housekeeping services." [Texas Town, Now Divided, Forged Bush's Firm Stand on Immigration, by Jim Rutenberg, June 24, 2007]

That sounds almost as if she were offering to work without pay, like Linda Chavez's illegal housekeeper/guest. That can't be right, can it? In fact, what visa did Señora Rendon come in on?

In any event, Señora Rendon is now an official Bush family retainer. The NYT says she "stayed on with the Bush family for decades, following George H.W. and Barbara Bush to the White House and back home". Ex-First Lady Barbara Bush had her recipe for lemon chicken published in her memoirs.

"I was thirteen years old when I opened the door that evening in 1959. Before long, Paula became like a second mother to my younger brothers and sister and me. She worked hard, taking care of our family in Texas and her own in Mexico. Eventually she bought a home and moved her family to Houston."

We call this chain migration.

"She always says the proudest day of her life came when she saw her grandson graduate from college."

"As governor and president, I had Paula in mind when I spoke about immigration reform.'Family values don't stop at the Rio Grande,' I said."

So let's review—Barbara Bush, in 1959, didn't want to do her own housework, or pay American wages for a housekeeper. As a result, she sponsored a woman who eventually brought her whole family. And who paid for it?

Bush views the rest of Mexican immigration simply in the context of his experience with his "second mother":

"Like Paula, most who left Mexico for the United States came to put food on the table for their families. Many worked backbreaking jobs, picking crops in the field or laying tar on roofs under the Texas sun. Some, like Paula, received permanent work visas. Others came as temporary workers through the Bracero Program. Some crossed the border illegally."

"Over the next four decades, the size of America's economy expanded from under $3 trillion to more than $10 trillion. The need for workers skyrocketed. Yet immigration and employment laws were slow to change. The Bracero Program expired in 1964 and was not replaced. The supply of permanent work visas did not rise anywhere near as fast as the demand for labor. With no practical way to enter the country lawfully, increasing numbers of immigrants came illegally."

I'm not going to reproduce Bush's entire Open Borders spiel here. But I assure you that at no time does he blame the illegals for coming illegally—he's only worried about the horrors of the illegal crossing that are caused by the fact that it is illegal:

"An underground industry of document forgers and smugglers, known as coyotes, sprang up along the border. They stuffed people in the trunks of cars or left them to walk miles across the searing desert. The number of deaths was appalling. Yet immigrants, many of them determined to feed their families, kept coming."

I think the last actual famine was in 1915. Indeed, Mexico now suffers from a "growing" plague of obesity, which is only going to get worse in El Norte.

What Mexicans want is not food, but money—to buy SUVs and the like, and access to American hospitals and schools.

In any case, the suffering of the illegals during the Bush administration was partly due to the Mexican government, which encourages the crossers; and partly due to Bush himself, for not guarding the border.

So because Barbara Bush, in 1959, didn't want to do her own housework, or pay American wages, the Governor of Texas/President of the United States wanted to open the border to all comers.

That would multiply the consequences of his family's importation of Señora Rendon's family by a factor of several million. (The bill will still not be paid by the Bush Family, but by you.)

And one line that in his biography that actually shocked me was here.

"My first partner on immigration reform was President Vicente Fox of Mexico. Vicente and his wife, Marta, were our guests at the first state dinner Laura and I held, on September 5, 2001. I discussed the possibility of creating a temporary worker program that would allow Mexicans to enter the United States lawfully to work a specific job for a fixed period of time. Vicente supported the idea, but he wanted more. He hoped America would legalize all Mexicans in the United States, a policy he called regularization. I made clear that would not happen. I believed amnesty—making illegal immigrants automatic citizens [Emphasis added]—would undercut the rule of law and encourage further illegal immigration."

"Making illegal immigrants automatic citizens"? Is that what Bush thinks amnesty means? (I discover, googling, that he said the same thing in a 2006 speech.)

I suppose that's why, having invented this new definition of amnesty, he kept saying his plan was "not amnesty."

Amnesty means not punishing aliens for their illegal crossing, or their illegal working-without-a-work-permit, and giving them the right to stay in the US as long as it's profitable for them.

Mexicans immigrants don't want particularly American citizenship—they have a perfectly good country of their own, that they can go back to when they retire, or at least be buried in.

What they want is residency. They want the right to stay in the US as long as it's profitable. They also want to be able to leave if it's not, or if they might be liable to military service.

Mexican illegals in the United States are doing the same thing American expatriates do when they work overseas in Dubai, the Czech Republic, or France. They don't want to be Dubainiks, Czechs, or Frenchmen. They want to make some money and go home.

And Mexicans, unlike the storied immigrants of Ellis Island, haven't left the Old Country behind, across the sea. It's right there next door.

Bush never understood this, in spite of having a Mexican nanny, a Mexican sister-in-law, a Mexican niece and nephew and being good friends with Mexican President Vicente Fox.

In effect, in spite of being Governor of a Border State, he doesn't really grasp that there's a whole other country called Mexico, with its own laws and traditions.

He should probably have asked Señora Rendon.

Of course, that would have involved, not just speaking to a servant—but actually listening to her.

James Fulford [Email him] is writer and editor for VDARE.com