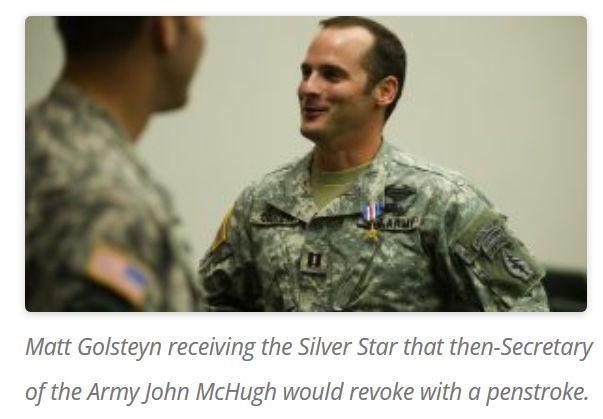 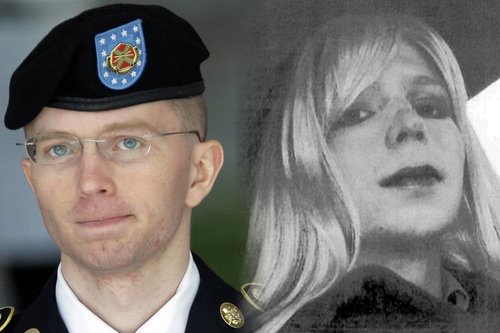 President Trump has pardoned Major Matt Golsteyn and Clint Lorance, as well as restoring Navy SEAL Eddie Gallagher to his rank. All three were accused of killing the enemy in the field.

By contrast, Obama pardoned members of the military who had committed crimes against the national interest. (I don't know if the pardon papers said Chelsea Manning or Bradley Manning, but Obama pardoned her and him for a betrayal of American secrets so bad that Pat Buchanan called it The 9/11 of American Diplomacy, and Obama also  refused to prosecute US Army deserter Bowe Bergdahl.)

The late Kevin O'Brien, a former Special Forces Sergeant, published this explanations of the Golsteyn  prosecution on his Weaponsman blog in 2016.

Matt Golsteyn is a name that should need no introduction. Basically he is not the first, but one of the best known, SF guys to have put himself in the crosshairs of anti-military, SJW-converged Washington. 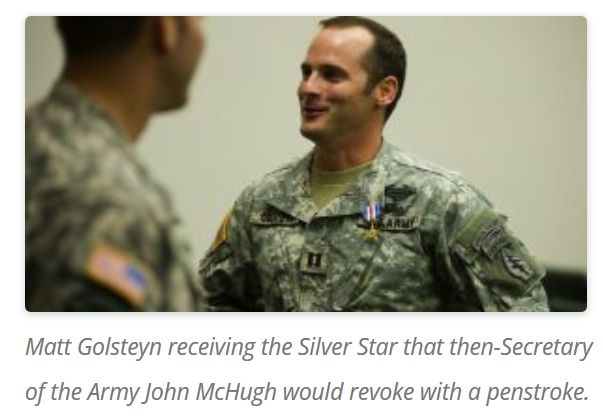 He did this by applying to another government agency, and during that agency’s in-depth security check, telling the truth about an incident he and his men had kept secret from their command, for fear of the warrior-loathing, enemy-enabling lawyers. They had handled the situation by Big Boy Rules. Wise or not, this put him in the crosshairs of warrior-loathing lawyers again, and he was stripped of earned valor decorations and came this close to being cashiered and imprisoned.

In the “Mad Duck” phase of the lame-duck Obama Administration, we expect even more pardons and commutations than the 1,300+ already issued in 2016, and we expect to see them go to the same kind of characters who have received them in the last eight years: gun-toting gangbangers and poison-peddling dope dealers. We can also expect more murderers airlifted out of Guantanamo and whisked back to resume the jihad. But we can tell you who won’t be getting out of jail for Christmas: First Lieutenant Clint Lorance. 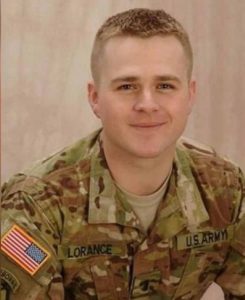 Lorance is a former platoon leader in the 82nd who was hung out to dry for ordering his platoon to fire on three men, two of whom were shot dead (sounds like his guys needed to tighten up their marksmanship). The Afghans were unarmed when gunned down, all parties agree on that. The prosecution represented them as innocent farmers who were victims of cold-blooded murder. (To see the prosecution side of the story, which does indeed make Lorance look like a monster, read this article by the usually anti-military reporter. Michelle Tan; the prosecutors placed the story with her and gave her access to their witnesses).

But whatever the victims were, they weren’t just innocent farmers. Both of the men whose deaths sent Lorance to jail were already in the biometric database used to keep track of insurgents and terrorists. And prosecuting attorney CPT Kirk Otto knew that, and kept the information not only from Lorance’s defense, but from the command, the members of the Court, the Court Martial Convening Authority, and the public as well….

Lorance is far from the only soldier to be targeted by the judge advocate general’s corps, the hand of the enemy in our own uniforms. Indeed, he’s one where the prosecution at least had an argument, unlike some of the other cases. But he’s an interesting example. And this Christmas, he’ll be setting that example in the US Disciplinary Barracks at Leavenworth, Kansas, while at least a thousand dope-dealing gangbangers will be back on the streets, as they like to say, “Keepin’ it real, you feel me?” [More]

Well, apparently, these American servicemen are not too white for Trump to pardon.

Army 1LT Clint Lorance is FULLY PARDONED and will be out of prison TONIGHT.

Navy SEAL Eddie Gallagher gets his rank & record back.

I read in the New York Times that "Top military leaders have pushed back hard against clearing the three men". [Trump Clears Three Service Members in War Crimes Cases, November15, 2019] If I were very, very, naive, I might believe that these "leaders" (the Secretarys of Defense and the Army) were concerned about military honor or "good order and discipline." My belief, instead, is that these "leaders" aren't loyal either to the men under them, or the elected President over them.

In that case, who the Hell are they loyal to?