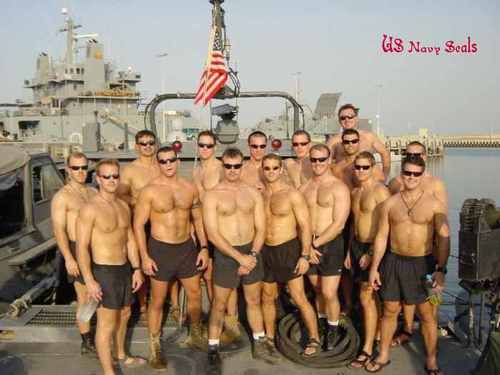 The Next Defense Crisis—Navy Seals Are Too White

Having essentially turned huge segments of the federal government, including large swaths of the military, into make work programs for the less skilled, the racial grievance industry is turning its attention to America's Special Forces.

Many of the Pentagon's elite commando units — including the Navy SEALs — are overwhelmingly led and manned by white officers and enlisted troops, a concern at the highest levels of the military where officials have stressed the need to create more diverse forces to handle future threats.

Black officers and enlisted troops are scarce in some special operations units in highest demand, according to data provided by the Pentagon to USA TODAY. For instance, eight of 753 SEAL officers are black, or 1%.

Recently, there's been a kind of trend of targeting and then destroying American institutions and industries that actually continue to help the nation. Silicon Valley is the one bright spot in a California which is collapsing from the dual hammer blows of drought and Third World migration. So it is coming under increasing attack from rent seekers demanding it artificially import more diversity.

The men of the New York City Fire Department became American legends with their heroic performance on September 11, 2001. Unfortunately, soon afterward the FDNY was sued for being too white and requiring high standards, like most successful institutions.

Navy SEALs are national heroes and pop culture icons and American foreign policy increasingly relies on small, elite forces rather than mass armies of recruits to get the job done. So let's force them to lower standards. What could go wrong?

Of course, this is being spun as something that will actually enhance American security.

"We don't know where we will find ourselves in the future," said Army Col. Michael Copenhaver, who has published a paper on diversity in special operating forces. "One thing is for sure: We will find ourselves around the globe. And around the globe you have different cultural backgrounds everywhere. Having that kind of a diverse force can only increase your operational capability."

Can only increase your operation capability? It seems more likely we should at least consider the possibility that a cobbled together force will lead to increased problems, especially when the American military can't even count on the loyalty of certain high ranking officers. But even considering the possibility that diversity may not necessarily equal strength can't be good for your career.

In fact, Col. Michael Copenhaver's own paper on the subject admits there may be a downside to all of this. Admitting leaders will need to focus on "managing" diversity as well as simply implementing it, he notes:

A civilian case study was completed by the International Review of Administrative Sciences entitled "Racial diversity, is it a blessing to an organization? Examining its organizational consequences in municipal police departments." The study's conclusion from research on more than 450 police departments from cities with more than 50,000 residents, is that there was a decrease in crime control performance and an increase in employee turnover as a result of increased diversification.

We already know affirmative action policies end up killing the very people they are designed to help by reducing the quality of service in crime ridden neighborhoods. What happens when America's elite forces are undermined by artificial "diversification?"

Hey, stop asking those kinds of questions, racist. You don't want to get into trouble, do you?