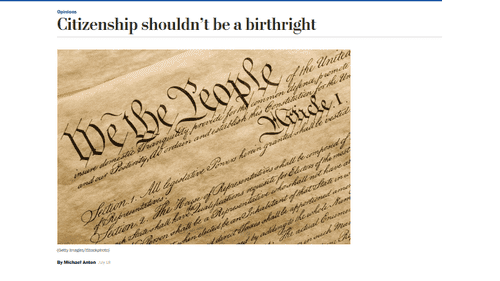 Former Trump Advisor Michael Anton: Birthright Citizenship Is a Misinterpretation of the Constitution

President Trump has observed that “America has worst immigration laws in the entire world” on more than one occasion, an assertion that is hardly debatable.

One of the stupidest institutions is birthright citizenship, so any female human on earth who can manage to plop out a baby on US territory will have an anchor to eventually import the entire family of foreign thieves via chain immigration: the practice is a huge magnet for illegal immigration. 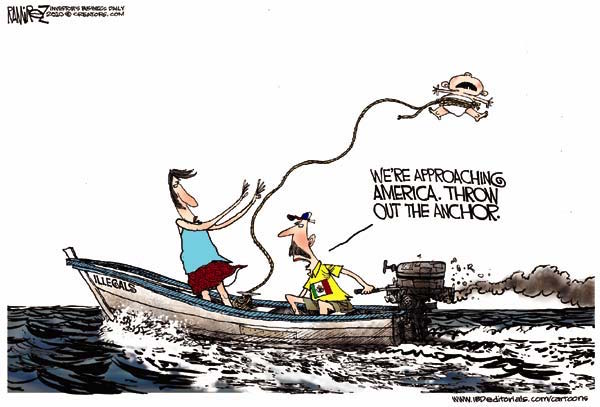 Michael Anton is a scholar who has written sensibly about immigration. He appeared with Tucker Carlson on Thursday to discuss birthright citizenship.

TUCKER CARLSON: Most of us grew up learning that the American Constitution guarantees birthright citizenship; in other words anybody born in this country even to parents who are here illegally or simply on vacation is a US citizen and due all the benefits of that for life. But is that really what the Constitution says? Michael Anton does not believe it says that. He’s a lecturer at Hillsdale College and a former Trump advisor just wrote a piece in The Washington Post arguing that birthright citizenship is not a constitutional requirement Michael Anton joins us tonight. Michael, thanks all for coming on. I’m amazed that Post printed this piece. Good for them. You took a lot of heat for it; people were shocked by the idea that you would even question this but you made your case partly on legal grounds. Why does the Constitution not say what we’ve been taught it says?

MICHAEL ANTON: You have to read the whole 14th Amendment. There’s a clause in the middle that people ignore or they misinterpret — “subject to the jurisdiction thereof” — ‘thereof’ meaning of the United States. What they’re saying is, if you’re born on US soil subject to the jurisdiction of the United States, meaning you’re the child of citizens or the child of legal immigrants, then you are entitled to citizenship. If you’re here illegally, if you owe allegiance to a foreign nation, if you’re the citizen of a foreign country, that clause does not apply to you.

If you read the debate about the ratification of the 14th amendment, all the senators who are discussing what this is meant to do and what it means are very clear on this point; I tried to point that out. I expected the left would blow up and get angry which they did. What I didn’t expect, at least not to this extent, and what was very disappointing was how angry the so-called conservative intellectuals got with me, and they essentially said any opposition to birthright citizenship is racist and evil and un-American. . .

These periodic, now-inevitable freak-outs are a sad by-product of our country’s drift away from political rule and over-investiture of power in the judiciary. But happily, the most urgent constitutional challenge of our time needn’t wait on a court ruling. Each political branch of government has the constitutional authority needed to fix it.

The notion that simply being born within the geographical limits of the United States automatically confers U.S. citizenship is an absurdity – historically, constitutionally, philosophically and practically.

Constitutional scholar Edward Erler has shown that the entire case for birthright citizenship is based on a deliberate misreading of the 14th Amendment. The purpose of that amendment was to resolve the question of citizenship for newly freed slaves. Following the Civil War, some in the South insisted that states had the right to deny citizenship to freedmen. In support, they cited 1857’s disgraceful Dred Scott v. Sandford decision, which held that no black American could ever be a citizen of the United States.

A constitutional amendment was thus necessary to overturn Dred Scott and to define the precise meaning of American citizenship.

That definition is the amendment’s very first sentence: “All persons born or naturalized in the United States, and subject to the jurisdiction thereof, are citizens of the United States and of the state wherein they reside.”

The amendment clarified for the first time that federal citizenship precedes and supersedes its state-level counterpart. No state has the power to deny citizenship, hence none may dispossess freed slaves.