Peter Brimelow writes: One of the nice things about being involved in a nascent political movement like patriotic immigration reform is that that you get to witness epochal moments. I saw one quite recently at an activist meeting in Washington D.C. A speaker showed a clip from George Colburn's Tomorrow's America DVD anthology featuring an interview with Norbert Schlei, who as assistant attorney general in the Kennedy and Johnson Administrations played a key role in designing the disastrous 1965 Immigration Act.

It is often said that no-one anticipated the 1965 Act's floodgate-opening consequences. Certainly its key supporters denied that anything untoward would happen. Senator Edward Kennedy notoriously said:

“…our cities will not be flooded with a million immigrants annually. Under the proposed bill, the present level of immigration remains substantially the same … Secondly, the ethnic mix of this country will not be upset … Contrary to the charges in some quarters, S.500 will not inundate America with immigrants from any one country or area, or the most populated and economically deprived nations of Africa and Asia. In the final analysis, the ethnic pattern of immigration under the proposed measure is not expected to change as sharply as the critics seem to think.”

But some specialists in this under-researched area think that key operatives were perfectly well aware of the consequences.

That's certainly the message conveyed, in an emotive way that no amount of factual analysis can match, by Schlei's sly smirk that concludes by this brilliantly-chosen excerpt. 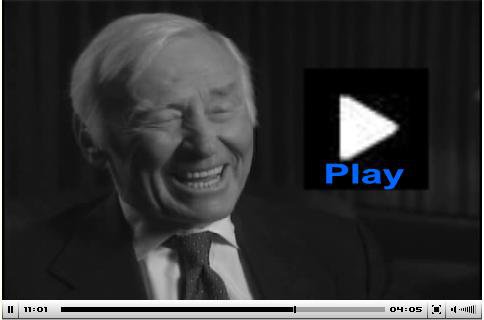 At the Washington meeting, the speaker provided this gloss:

“The 1965 Immigration Bill was originally authored by Norbert Schlei. “The author's intent is now a narrative of the past.

“Mr. Schlei died on April 17, 2003. The effects of his handiwork persist. On our edge of time, we are left with the memory of a smile.

“Leonardo da Vinci's Mona Lisa is memorialized by the ambiguity of her smile. “Was it a smile of reverence or ridicule?

“Did she harbor misgivings for falling from grace or arrogance for ascending to higher ground? “Was it a smile of convenience or contrivance?

“Triumph or tragedy? “Kindness or contempt?

“Was she affable or aloof?

“Either way, interpretation is now the province of historians.”