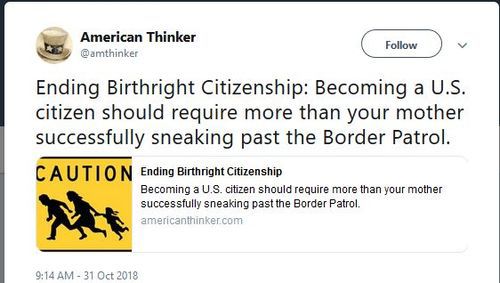 "Becoming A U.S. Citizen Should Require More Than Your Mother Successfully Sneaking Past The U.S. Border Patrol."

My title above comes from the summing-up in an Investor's Business Daily editorial. [Born in The USA, November 29, 2005, not online.] It seems to be the invention of former IBD editorial writer Daniel John Sobieski, who used it in The American Thinker in September and again today. [Ending Birthright Citizenship, By Daniel John Sobieski, October 31, 2018]

(It's not the entire issue.  There's also the phenomenon of birth tourism.  Further, illegal aliens who've "achieved" their status by overstaying visas didn't sneak past the Border Patrol.  Plus what about people—such as foreign graduate students—who have children while here on temporary visas: should such children be U.S. citizens by birthright?)

Well, now that the nation-breaking matter of birthright citizenship has—at last!—surfaced prominently in our national conversation, people who are serious about The National Question (such as those who routinely read postings at VDARE.com) need serious intellectual resources to dig into so they can master the arguments and then help make the absurdity of the current practice obvious to anyone they encounter—relatives, friends, co-workers, neighbors, invertebrates in public office, and journalists.

Three senior fellows of the Claremont Institute—Edward Erler (emeritus professor of political science at California State University, San Bernardino), John Eastman (professor and former dean at the Chapman University law school in Orange, California), and Michael Anton (pseudonymous author of The Flight 93 Election and now scholar at Hillsdale College's Kirby Center in Washington, DC)—are heavy hitters in this arena.  Professors Erler and Eastman have been laboring in the vineyard for a long time, while Mr. Anton, a supernova, has lately arrived on this scene.

The Institute has just collected all the related writings by these three and by others (including some from the opposing side) on a newly-posted page at a subsidiary website ("The American Mind").  Here's their introduction:

A heated national conversation about birthright citizenship and the 14th Amendment is currently underway, and we think many politicians, pundits, and scholars on both the right and left are getting it wrong. Claremont Institute scholars have been thinking and writing about this problem for many years. ...

Below we’ve collected recent and past writings and video to provide some guidance on the relation between constitutional principles, citizenship, and immigration policy as we understand it.

[The Case Against Birthright Citizenship]

Altogether that page has more than 30 embedded videos and links to articles.  It's clearly the place to go if you want to wise up on this festering sore in our national public policy.  (I'd previously encountered only a modest fraction of those resources.)

Once you're on top of the subject you'll be able to, for example, confidently answer people who jabber at you about United States v. Wong Kim Ark.  And you'll have a basic knowledge of the Snyder Act in your intellectual reserve.  (No, I'm not going to summarize those for you.  Go read and watch!)

One article I've read repeatedly over the years when needing a refresher on the anchor-baby problem is Mark Cromer's lengthy American Jackpot: The Remaking of America by Birthright Citizenship, commissioned in 2009 or 2010 by Californians for Population Stabilization [CAPS].  From Cromer's introduction:

[T]he United States today stands virtually alone among power-house industrial democracies in granting unequivocal birth citizenship. The notion of being an instant American if born on United States soil has been so romanticized at critical junctures in our evolving popular culture it is now seen by many as a fundamental characteristic of the American identity. Consequently, the growing calls to end the practice are viewed by some as a heretical departure from what makes this country a beacon of hope to so many around the world.

So there’s no small amount of irony in the fact that the policy of granting birthright citizenship in America has become a core gravitational ‘pull factor’ that has resulted in the largest sustained wave of mass human migration ever witnessed in the history of the nation-state; a human tsunami that has played a critical role in the rapid erosion of the quality of life that so many immigrants seek on these shores. It also increasingly poses a non-consensual makeover of the culture that American citizens had neither voice nor vote in unleashing.

Besides input on law and policy from both Professors Erler and Eastman, Cromer also delved into the history of this fundamentally bizarre phenomenon that has one's mother's evasion of the U.S. Border Patrol constitute one of those famous "pathways" to American citizenship.