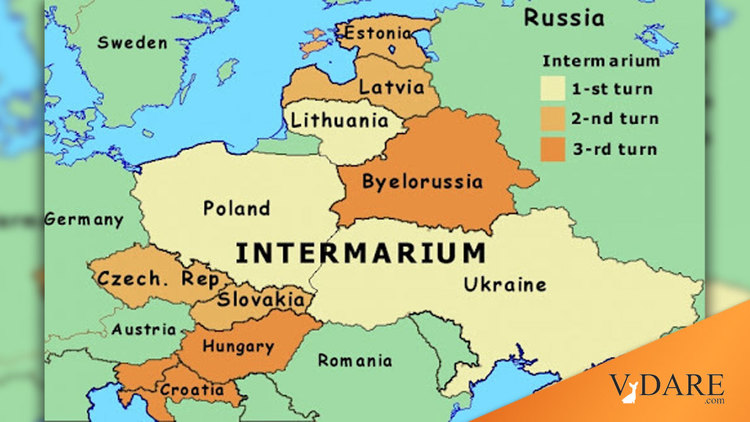 An American Warns Eastern Europe: The Potomac Regime Is Not Your Friend (Or Ours)

The lie that “diversity is strength” may be useful when suppressing the Historic American Nation, but it goes out the window when the Potomac Regime and its client states need to engage in serious geopolitics. The European Union has denounced Belarus’s  dumping Third World immigrants on its EU neighbors as “hybrid warfare”—showing that Western politicians are quite capable of realizing that such migration isn’t just a liability, but almost an act of war. The simmering conflict in Ukraine shows that the true borders between nations and civilizations aren’t found on a map, but can be identified by blood, language, and culture. And the Potomac Regime is facing an existential question—can it enforce its will abroad having purged the American military at home? For Eastern Europeans literally under the guns, the solution may be to declare independence from both Washington and Moscow.

The Belarusian government’s attempt to shovel Middle Eastern migrants into Europe was cynical but brilliant. After all, if diversity was indeed strength, shouldn’t Poland be thanking Belarus for providing them with all these sources of national revitalization? Some American journalists couldn’t quite handle the cognitive dissonance, baldly arguing that Europe had no choice but to simply accept the migrants Alexander Lukashenko was shepherding to Poland’s borders.

European and American pundits and politicians beat their chest about confronting this new form of “hybrid warfare” [“Hybrid warfare” in Belarus tests West, by Zachary Basu, Axios, November 11, 2021]. Yet what exactly is different from what Belarus was trying to do than what “Western” governments themselves inflict on their own populations? President Lukashenko should have simply laundered the migrants through a “Non-Governmental Organization.” He could have had Western governments themselves (or George Soros) paying for his actions.

If there is a conflict with Russia, what exactly does Vladimir Putin face? The current European Union is a beast with no head. Its most powerful country, Germany, is led by an anti-German government which simultaneously wants to confront Russia but has a left wing that can’t stomach strengthening the German armed forces [New German new defense minister takes office, as allies await answers on spending, nukes [sic], by Sebastian Sprenger, Defense News, December 8, 2021]. France is gripped by a nationalist challenge to President Emmanuel Macron. Macron’s initial “Jupiterian” pretensions to strong leadership have been replaced by an inconsistency as he flounders from crisis to crisis and flails wildly on immigration [Macron election warning: Leader ‘pleased no one’ in France with immigration stance, by Tom Hussey, Express, October 31, 2021]. Poland, Hungary, and the Baltic states are on the front line of any potential conflict with Russia, but Brussels (and Washington) threaten their sovereignty more than does Moscow [A discomfort with Western liberalism is growing in Eastern Europe, by Joanna Kakissis, NPR, December 4, 2021]. Besides, which European countries specifically will march to defend Ukraine?

What of the U.S.? Even the most naïve American patriots, who might have been willing to fight for a foolish cause in the past, are being purged from the armed forces [Is The US Military Being Purged Of Rightists?, by Rod Dreher, The American Conservative, March 23, 2021]. The military’s top “enlisted” leader is furrowing his brow about more “extremism trainings” that soldiers need to be forced to sit through [Some Troops See Capitol Riot, BLM Protests as Similar Threats, Top Enlisted Leader Says, by Stephen Losey, Military, March 19, 2021]. Senator Tom Cotton has cited hundreds of alleged complaints from service members about “woke ideology” indoctrination [Hundreds of Troops Complain About ‘Woke’ Racism, Extremism Training, Cotton Claims, by Jacqueline Feldscher, Defense One, June 11, 2021]. Thousands of sailors, Marines, and airmen are refusing the Pentagon’s vaccine mandate, risking a discharge [Vaccine holdouts in Navy, Marines hit 19,000 as deadline passes to comply with mandate, by Alex Horton, Washington Post, December 4, 2021]. President Biden, who may be more on the ball than his critics think, may have ruled out American troops on the ground precisely because he knows this country can no longer project power against a credible enemy.

Conservatism Inc. is of course claiming that President Biden is weak and demanding more militant action against Vladimir Putin. National Review is naturally eager for conflict, once again making comparisons to Munich:

It’s possible for a political leader to be a robust nationalist and social conservative without jailing the political opposition, assassinating critics, invading and dismembering neighboring countries, enriching a kleptocracy, and installing a de facto dictator for life.

Oh yeah? If we take Hungary’s Viktor Orbán, that’s not enough to keep Washington from trying to overthrow your government by funding opposition media, something that would certainly qualify as “interfering in foreign elections” [Hungary accuses US of meddling in election, by Lili Bayer, Politico, November 16, 2017]. (It’s important to note that this continued even under the Trump Administration—another failure by the former president to pay attention to what his own bureaucracy was doing.)

Putin’s actions may be authoritarian, though Russia is hardly a totalitarian state. Besides, what Russian could regard the expansion of NATO to his country’s very borders as anything but a threat [NATO’s Enlargement and Russian Perceptions of Eurasian Political Frontiers, by Igor Zevelev, George Marshall Center for Security Studies]?

In “Our Democracy,” it’s also a bit rich to allude to Putin “jailing the political opposition” when it is Washington DC that swoops upon random Americans, throws them in jail, allows them to reportedly be beaten and tortured by resentful Third World guards, and blesses selective political violence against them.

In what sense is the Potomac Regime somehow more legitimate than Vladimir Putin’s regime [With Zero Moral Authority Left, The Globalist American Empire is Doomed to Fail at Home and Abroad, Revolver, February 2, 2021]? America looks better only compared to true dystopias like some of the subjugated countries of Western Europe, where free speech has been utterly abolished.

What constitutes a nation anyway? The Ukrainian people’s right to self-determination is unquestionable, but many of those in “eastern Ukraine” do not consider themselves Ukrainian. The separatist republics in the east (the “Donetsk People’s Republic” and the “Luhansk People’s Republic”) consider Russian their main language.

Those who claim “democracy” is at stake should remember that the only reason the crisis occurred is because an actual violent insurrection with actual “far-right” support against an elected government was successfully carried out in the 2014 Maidan coup—and it was cheered on and backed by the United States.

Let’s consider a thought experiment. If the January 6 riot had been an actual “insurrection” that took over the government through violence, and it had been materially backed by Russia and/or China, what would Democrats do? Would California or New York simply shrug and accept it as legitimate? The Regime Media and the politicians they control have very selective outrage when it comes to the evils of an insurrection against a democracy.

The Biden Administration is reportedly seeking a way out of the crisis by suggesting Ukraine recognize reality and cede some control over the eastern territories, which it doesn’t really control in any event [Biden Admin May Push Ukraine to Relinquish Control over Eastern Territory: Report, by Zachary Evans, December 9, 2021].

Let me be clear–I believe President Biden should be praised for this. But many Republicans and Conservative Inc. spokesmen are howling for more militant action, with Tucker Carlson (as usual) being one of the few people who recognize it is no longer 1981 [Tucker Carlson: US would gain nothing in confrontation with Russia, Fox News, December 8, 2021].

For this, some call Carlson a “Kremlin propogandist” [Tucker Carlson Is America’s Most Watched Kremlin Propogandist, by William Saletan, Slate, December 10, 2021]. If the journalists get their war, I would take a certain grim satisfaction in knowing that it would be the patriots who would be banned from the military for political reasons. A draft of journalists and those who receive preferential racial treatment from the Potomac Regime would be appropriate. Those whom our rulers serve should be the ones who have to go fight their Regime’s overseas adventures.

Yet while I wouldn’t fight for Donbas, I don’t want to dismiss Ukrainian nationalists. While I don’t think the borders of Ukraine extend to the “people’s republics,” there is a Ukrainian nation, and Russian imperialism would be as noxious as Washington DC’s imperialism.

If there’s one thing the world needs less of, it’s Americans offering suggestions to the rest of the world. I must therefore beg forgiveness of Eastern European comrades for the following unsolicited advice:

Well-meaning and brave patriots in Ukraine who look to the U.S. for help should remain cautious. Depending on who holds sway in the Biden Administration, or if a more hawkish GOP reclaims power in 2022, they may get enough military backing to maintain a hold over the resentful Russian-speaking populations in the east. Unfortunately, this would not mean the preservation of Ukrainian military independence. It would simply mean trading the more insidious and destructive form of colonial rule from Washington and Brussels rather than Moscow.

If those in Eastern Europe feel themselves (accurately) surrounded by foes on both sides, perhaps it is time to resurrect the Intermarium concept for a confederation that would allow Eastern Europe (including Western Ukraine) to be a strong enough power to resist both Russia and the United States [Imagined Geographies of Central and Eastern Europe: The Concept of Intermarium, The Institute for European, Russian, and Eurasian Studies March 2019]. 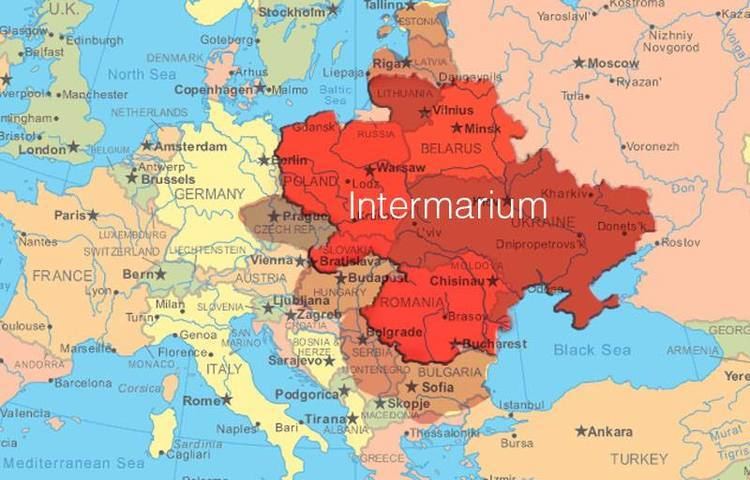 Ukraine, Poland, and Hungary should be wary of “Western” support. The same forces that might protect them against Russian troops and Belarussian-transported migrants today will be the same ones forcing Third World immigration onto their countries tomorrow.

For Eastern Europeans forced into a losing game of choosing between Washington and Moscow, the only winning move may be not to play at all.

It’s not just Moscow and Minsk that are capable of waging “hybrid warfare” against you.

Indeed, here in “Our Democracy,” it sometimes feels like the Regime is waging “hybrid warfare” against its own citizens.