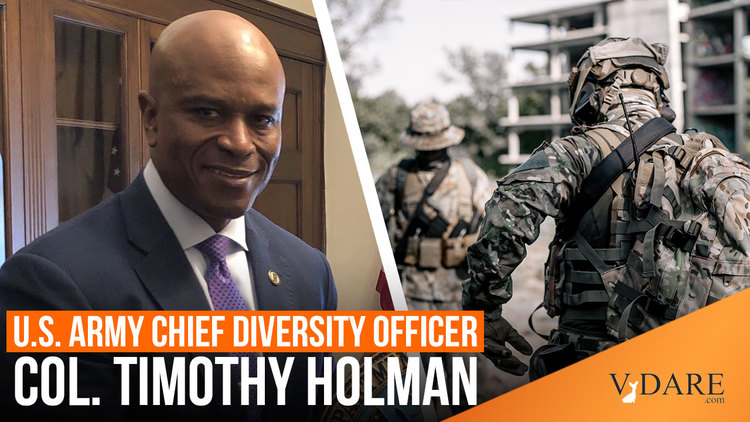 Diversity, Inclusion, And Equity Means The US Army Will Never Win A War Again...

The United States of America will never win a war again.

WASHINGTON — As the Army continues efforts to improve diversity within its ranks, it is also reinforcing policies to eradicate extremist behaviors and activities.

For the colonel, the fight against extremism is one he personally encountered. His aim is clear: do what he can to help open a path for future Army leaders and make the force as diverse as the nation it defends.

“My hope is to ensure better representation of our country among the senior ranks,” he said.

As a child in Mississippi during the early 1960s, Holman, an African-American, witnessed the tail-end of an era plagued by racially-motivated murders based on skin color. People such as Emmett Till in 1955; Medgar Evers in 1963; Vernon Dahmer in 1966; and others whose names history may never know, were all killed in areas near Holman’s hometown.

“Growing up in a little bitty segregated Mississippi town, it was not uncommon for people to call you derogatory terms, and nothing would happen [to them],” he said. “It was a place where people said, ‘hey, you can’t come to this side of town after dark because of the color of your skin.’”

The Army’s policy bans all personnel from participating in extremist organizations and activities, Holman said. Organizations and activities in which personnel are prohibited from participating include those that advocate, among other things: racial intolerance or discrimination; use of force to deprive individuals of their constitutional rights; and advocating or teaching the overthrow of the U.S. government.

In other words, extremism in any form has no place in the military, the colonel said.

Ideally, extremism would not exist anywhere, but Holman is very familiar with extremism after growing up in rural Mississippi during the civil rights movement.

For two decades, he endured unmistakable racism. He feared things others may take for granted, like walking through certain areas after certain hours.

Steps in the right direction

As part of the Project Inclusion initiative, Army leaders initiated a listening tour, titled “Your Voice Matters,” which aims to cultivate a culture built on trust, Holman said.

During the listening tour, Army leaders take note of the concerns pertaining to “racism,  equity, inclusion, extremism, quality of life, whatever Soldiers have on their minds,” Holman said.

Project Inclusion, which began during the summer, is an effort to improve diversity, equity, and inclusion across the force while building cohesive teams. “This holistic effort will listen to Soldiers and Army civilians, and identify any practices that inadvertently discriminate,” he said.

Extremism has frequently been a topic of discussion during the “Your Voice Matters” listening sessions, which are sometimes held virtually due to COVID-19 restrictions. It is a topic from which the diversity chief does not shy away.

“We have to [address] these issues, move toward diversity, and understand how people who might join the Army with extremist views are redirected,” he said. “It’s in line with what Army Chief of Staff Gen. James C. McConville said, ‘people first.’”

Modernization is critical; however, the Army’s people will operate the equipment and make it work, Holman said. If the psychological safety of a fighting force prevents it from being its best, then the mission will fail.

“When the chief of staff touts ‘people first,’ that is reflected in eradication of any extremism within the ranks,” he said. “Extremism will only limit or prohibit building the cohesive teams the Army needs. If that’s the case, it doesn’t matter how good your equipment is, if the soul of the force isn’t operating at an optimal level.”

The Army has a chief diversity officer?

Our nation has no chance in a 21st century war, when diversity is our most important goal to aspire to achieve, when such an achievement is a complete repudiation of the concept of nation and unity.