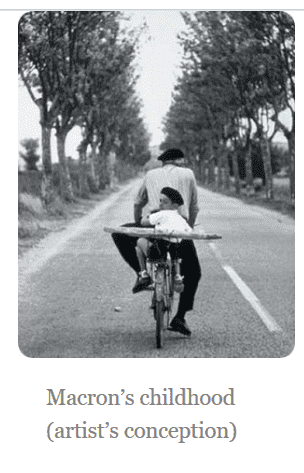 Commenter Mobi points out that the press has decided it’s very important that you think of 39-year-old French presidential frontrunner Emmanuel Macron as an outsider.

If you read the fine print rather than the headlines, you might get the impression that Macron is the distilled essence of the French ruling class.

But that would be wrong.

He is an Outsider.

Here are some headlines informing you of the appropriate take on Macron’s sudden rise:

“Emmanuel Macron: the French outsider who would be president”

“An Outsider’s Bid for the French Presidency”

“Who is Emmanuel Macron? The political outsider who could become France’s youngest ever president”

Get it? (It’s very important.)

Since the old French elite was humiliated in 1940, unlike the British elite who were not and thus kept their ancient universities, Oxford and Cambridge, the French elite have rebuilt themselves since 1945 a new system of hyper-elite education that maintains a relatively low profile on the world stage. So I’m not terribly familiar with current French academic institutions. They are more opaque to outsiders than, say, the famous Oxford Philosophy, Politics, and Economics degree that so many of the current generation of the British ruling class sport.

But it would appear that Macron got his ticket punched at exactly the right places.

For example, ENA is roughly a smaller, even more elitist version of Harvard Business School for French government officials. It’s an advanced degree for those who already have an advanced degree from places liked Sciences Po, which isn’t as comic as it sounds in English: Paris Institute of Political Studies. It’s not clear what they teach there, but the networking opportunities are said to be superb. Macron will likely be the fifth straight French president to have attended Sciences Po.

He worked as an Inspector of Finances in the Inspectorate General of Finances (IGF) and then became an investment banker at Rothschild & Cie Banque.

A member of the Socialist Party (PS) from 2006 to 2009, Macron was appointed as deputy secretary-general under François Hollande’s first government in 2012.

He was appointed Minister of Economy, Industry and Digital Affairs in 2014 under the Second Valls Government,[2] where he pushed through business-friendly reforms. He resigned in August 2016[3] to launch a bid in the 2017 presidential election.[4] In November 2016, Macron declared that he would run in the election under the banner of En Marche!, a centrist[5] political movement he founded in April 2016. He qualified for the runoff after the first round of the election on 23 April 2017.

So, Macron was more or less Finance Minister of France. Wikipedia lists him as part of a long lineage of Finance Ministers under various titles including Fouquet, who famously ran afoul of Louis XIV, Colbert, John Law of the Mississippi Bubble, Turgot, Necker, Poincaré, Blum, Schuman, Giscard d’Estaing, Dominique Strauss-Kahn of chambermaid notoriety, and Sarkozy.

So Macron is a complete outsider hayseed.