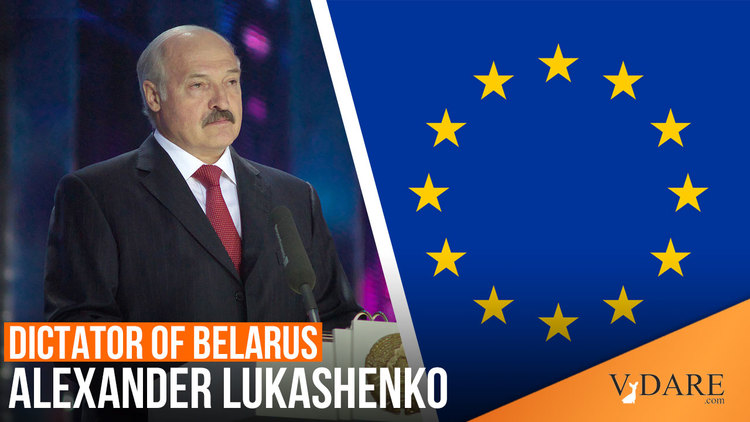 The dictator of Belarus is punishing the European Union for objecting to him stealing the last election by inviting 3rd Worlders to his country to sneak across the Polish border into the E.U. as illegal immigrants. On the New York Times opinion page, a pundit explains why it’s bad for Europeans not to let themselves be punished by the dictator.

Ms. Neumeyer is a writer and a historian of Russia and Eastern Europe who has reported from the border between Poland and Belarus.

In the vast primeval forest that lies between Poland and Belarus, European bison graze under ancient trees alongside refugees, weak from cold and hunger. The new arrivals — from countries including Iraq, Afghanistan, Syria, Nigeria and Cameroon — have different stories, but a shared predicament. They all purchased flights to Minsk, Belarus, with the promise that they would be taken to the European Union, only to end up stranded in the woods.

Left to wander the forest in freezing conditions, the migrants are the victims of President Aleksandr Lukashenko of Belarus. In retaliation for European Union sanctions against his regime, he is reportedly luring people to Minsk and then depositing them at the country’s border with Poland. But the problem goes beyond Belarus. The Polish government, presenting itself as the nation’s protector from invasion, has refused the migrants entry — and, in some cases, actively pushed them back into the woods.

Far from earning rebuke, Poland’s approach has the backing of the European Union. It is, after all, more or less what the union has been doing for the past five years. To avoid a repeat of the migrant crisis of 2015-16, when over a million people sought refuge in Europe, the bloc has tried to seal off the Continent from another influx of people.

But these efforts, often draconian and brutal, have failed. In the aftermath of the Taliban’s takeover of Afghanistan and as unrest continues across the world, more people will head for Europe. The next migrant crisis has arrived.

With southern routes choked off, the bloc’s eastern border has become a major point of entry. …

Poland’s response has been severe. … Not content with a media blackout, Poland is also, like neighboring Lithuania, erecting a fence along the border.

In adopting this stance, the Polish government is following its own example. In 2015, at the height of the crisis, the leader of Poland’s far-right Law and Justice Party, Jaroslaw Kaczynski, claimed that Muslim refugees carried parasites. After riding popular fear to electoral success, the party made good on its anti-migrant agenda and refused to accept quotas of refugees assigned by the European Union. It was joined by the Czech Republic and Hungary, whose prime minister, Viktor Orban, began building a wall on Hungary’s border with Serbia and Croatia.

Their approach now seems prophetic. In “fortress Europe,” enclosure is the new normal. In the past five years, the bloc has paid Turkey and Libya to keep out migrants and patrolled the Mediterranean Sea, while member states including Austria, Greece and Bulgaria have installed new border fortifications. The union is currently working on a financial deal with Afghanistan’s neighbors to prevent people fleeing the Taliban from coming to Europe. Violent border pushbacks are increasingly common, illegal measures that critics say are supported by the bloc’s border agency, Frontex. The message is clear: Newcomers must be turned away, no matter the cost....

It’s almost as if Europe’s leadership now admits Orban was right in 2015.

In his book “Strangers at Our Door,” written during the 2015-16 crisis, Zygmunt Bauman, a Polish sociologist and World War II veteran, argued that militarized borders are a misguided response to uninvited guests. The only solution to fear, he wrote, is to replace hostility with hospitality, showing forms of solidarity that recognize our interdependence as a species.

So, Europe, accept the punishment the Belarusian dictator has decreed for you.