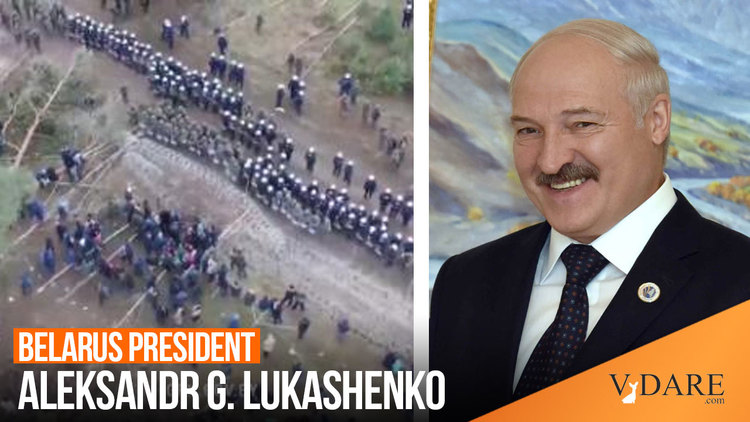 NYT: "Risk For Leader Of Belarus: Migrants He Lured May Want To Stay"

Risk for Leader of Belarus: Migrants He Lured May Want to Stay

President Aleksandr G. Lukashenko of Belarus, whom the E.U. accuses of engineering a migrant crisis on the border with Poland, could face a serious headache if asylum seekers try to stay in his country.

BRUZGI, Belarus — He has ruled with an iron fist for 27 years, surviving huge street protests, multiple rounds of Western sanctions and even alleged plots by his benefactor, Russia, to remove him.

But a threat President Aleksandr G. Lukashenko has never before had to contend with is now taking shape in a squalid migrant encampment along his country’s border with Poland. Having helped funnel desperate migrants to Europe’s doorstep, Mr. Lukashenko suddenly has to deal with people like Bale Nisu, a 21-year-old Kurd from Iraq who has taken a liking to Belarus, and would like to settle here.

Many of the more than 2,000 people marooned on the Belarusian side of the razor wire at Bruzgi, a large, shuttered border crossing, insist they won’t give up on trying to get into the European Union. But growing fears that they might instead get sent back to their home countries has made Mr. Nisu and others wonder whether staying put in Belarus could be their best option.

“I want to go to Germany, but if that is impossible, I’ll just stay here,” Mr. Nisu said Wednesday after moving into a big warehouse near the border that has been converted into a migrant holding center by the Belarusian authorities in an effort to release pressure on the border — and burnish the country’s often grim image.

He lamented that he had spent more than $4,000 and days freezing in the forest only to end up in a poor, highly repressive former Soviet republic with little to offer in the way of jobs and other opportunities.

But, showing rips in his pants, which he maintained were caused by Polish security forces beating him up after an abortive attempt to sneak across the frontier last week, he said that Belarus looked far more enticing than returning to Iraq, or more encounters with Polish soldiers and border guards. He said he wanted to apply for asylum in Belarus.

It’s almost as if politicians pushing for more migration, like Lukashenko, are the bad guys.