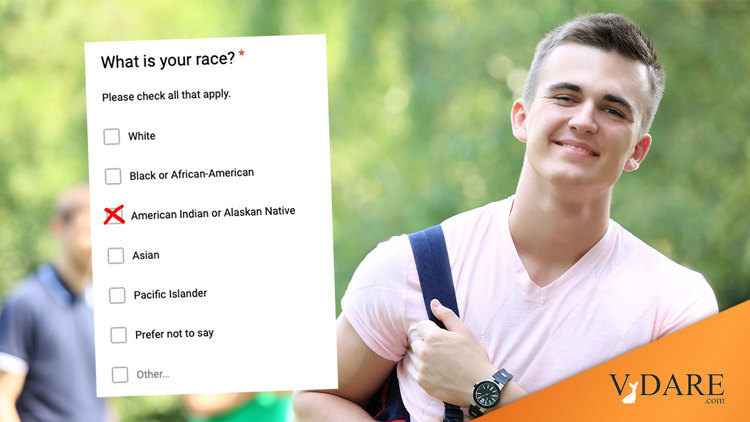 Do 48% Of White Male College Applicants Lie About Their Race? Interesting, If It Replicates 34% OF WHITE COLLEGE STUDENTS LIED ABOUT THEIR RACE TO IMPROVE CHANCES OF ADMISSION, FINANCIAL AID BENEFITS

… Intelligent.com asked 1,250 white college applicants ages 16 and older if they lied on their application by indicating they were a racial minority.

The survey found that 34% of white Americans who’ve applied to college falsely claimed on their applications they’re a racial minority.

The number one reason why applicants faked minority status is to improve their chances of getting accepted (81%). Fifty percent also lied to benefit from minority-focused financial aid.

Lying also varies by age groups, with 43% of people 35-44 years old, and 41% of 16-24 year-olds admitting to faking a racial minority status when applying to college.

So, if true, this would suggest this isn’t much of a recent trend.

Nearly half of all respondents who lied about their minority status (48%) identified themselves as Native American on their applications. Twice as many men as women claimed Native American heritage on their applications (54% compared to 24%). Meanwhile, one in four women (24%) claimed to be Latino. Women are also more than twice as likely as men to pretend to be Black (18% compared to 8%). …

All data found within this report derives from a survey commissioned by Intelligent.com and conducted online by survey platform Pollfish. In total, 1,250 white Americans were surveyed. To qualify for the survey, each respondent had to have previously applied to a college or university in the U.S. Appropriate respondents were found via a screening question. This survey was conducted on July 13, 2021. All respondents were asked to answer all questions truthfully and to the best of their abilities. For full survey data, please email Julia Morrissey at julia@intelligent.com

Interesting, if it replicates.

My guess is that if you claim to identify as an American Indian and don’t live on a reservation or don’t claim specific tribal membership, college admissions offices don’t count you unless you have some extra-credit Indian activities.

Amusingly, Ibram X. Kendi tweeted this out, then deleted it when it was pointed out to him that he’s undermining his own lucrative theory about systemic racism.