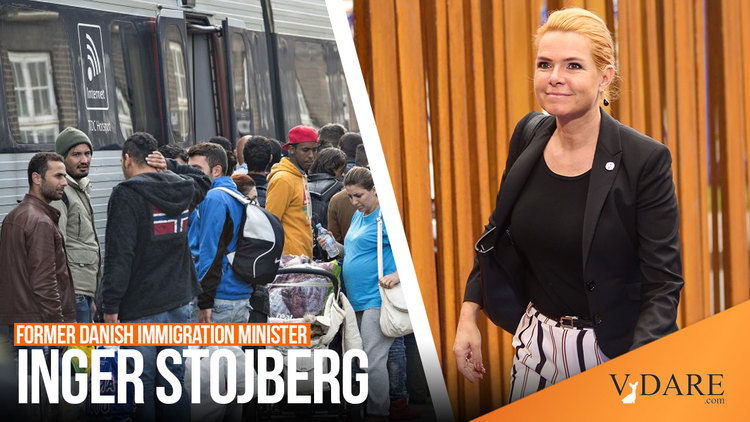 The problem with being left-wing, as has been documented by Danish researcher Emil Kirkegaard, is that you feel negative feelings very acutely. In fact, you experience anxiety, jealousy and anger so strongly that these feelings can overwhelm the ability to think and behave in a rational way [Mental Illness and the Left, by Emil Kirkegaard, Mankind Quarterly, 2020]. The result can be counterproductive actions: the Danish Leftist thinks “I will flood Denmark with Muslim immigrants as a way of channelling the anger I feel for my ethnic kin, from whom I feel excluded.” The result, as I documented a couple years ago, is the rise of a strongly anti-immigration party: the Danish People’s Party, which was so popular that the Leftist Social Democrats actually stole its hard-line policies, with its leader proclaiming that the price for globalization is “paid by the lower classes” [Mette Frederiksen: the anti-immigration left leader set to win power in Denmark, by Richard Orange, The Guardian, May 11, 2019] and promising to further restrict immigration.

Unfortunately, the Social Democrats promptly ditched their campaign promises in order to form a coalition with the extreme Left. And now, the Danish Left has permitted its uncontrollable sense of resentment and hatred to overwhelm it again. In a very unusual move, the Danish parliament, in which the Leftist bloc is the largest, has impeached the woman who was the immigration minister in the right-wing coalition that left office in 2019. Evidencing the impact of the Danish People’s Party on other parties, she was actually a member of Venestre, Denmark’s mainstream conservative party, which governed 2015-2019. The result is that she has been sentenced to 60 days in jail [Danish ex-minister jailed for separating asylum-seeking couples, Al-Jazeera, December 13, 2021], making her a martyr not only to her party but to a significant portion of the Danish population, including many of those who voted for the Social Democrats.

48-year-old Inger Stojberg was Minister for Immigration, Integration and Housing between 2015 and 2019. Prior to that, aas an advocate of anti-immigration policies, she had been one of the most prominent voices in her party, of which she was vice-chairman until 2020. Upon getting into office in 2015, Stojberg implemented a policy of limiting social benefits for asylum seekers, with the specific aim of discouraging them from claiming asylum in Denmark, as she told a German newspaper [Maximal abschreckend, by Manfred Ertel, Spiegel, January 13, 2016].

Asylum seekers, under her instruction, also had to give up their valuables before being permitted to enter Denmark, as a contribution towards future social service costs for them. In addition, unemployed immigrant spouses may not come to Denmark unless the Danish spouse earns above a certain income level, such that he or she can fund both of them [Denmark wants to seize jewellery and cash from refugees, by Rick Noack, Washington Post, December 15, 2015].

However, it is Stojberg’s concern about child brides, and forced marriage, which has really upset the Left—and, indeed, the squishes within her own party. As immigration minister, taking the view that child marriage and what would constitute statutory rape under Danish law are completely unacceptable, as are forced marriages, she instituted a policy of separating married couples in refugee centers if one or both of the partners were minors. That is, she wouldn’t allow an over-18 asylum seeker to keep his under-18 bride—18 being the legal age of marriage in Denmark.  Some of these separated couples, most of whom were from Syria, had children of their own, and the women claimed that they had not been forced to marry [Denmark begins trial of former immigration minister over separating migrant couples, DW, September 2, 2021].

Stojberg’s concern was not misplaced. The age of “consent” in Syria is 15, and so is the legal age for marriage. (“Consent” is in quotes above since it’s really the parents who are consenting—if a girl were to consent on her own in Syrian society, she might be stoned to death for adultery, or honor-killled by her parents). According to one report:

In Lebanon today, 41% of young displaced Syrian women were married before 18. Given that many marriages are unregistered, these figures may, in fact, be much higher.

[Child marriage and the Syrian conflict: 7 things you need to know, GirlsNotBrides.org, August 16, 2018]

Specifically, in 2016, a total of 23 such couples, albeit apparently with relatively small age differences, were separated. This was done on the direct instruction of Stojberg and without regard for mitigating circumstances that might pertain to individual cases. This attempt by Stojberg to stamp out child marriage was argued to be illegal. As a result, in February this year, the Danish parliament voted by 141 votes to 30 to impeach Stojberg [141 folketingskolleger stemte Inger Støjberg i rigsretten, by Mads Korssager Nielsen, DR, February 2, 2021].

The trial concluded on December 12 and the verdict, which cannot be appealed, was guilty: “Inger Stojberg is found guilty of a deliberate violation of the Ministerial Responsibility Act,” Denmark’s Court of Impeachment of the Realm said in a statement, adding that the punishment had been set at 60 days in jail.

Stojberg is unlikely actually to serve any time in jail, as people sentenced to less than six months can apply to instead be electronically monitored for the length of their sentence [Danish ex-minister jailed for separating asylum-seeking couples, Al-Jazeera, December 13, 2021].

That said, it might make political sense for Stojberg to make a point of serving the time, thus cementing her martyr status. She was quoted by Politico as saying after the trial: “I will take my punishment. And then I will move on after that” [Ex-Danish minister convicted over 2016 asylum ruling, by Charlie Duxbury, Politico, December 13, 2021].

After being impeached, Stojberg resigned from Venestre. Interestingly, the leader of the Danish People’s Party announced last month that she intended to resign as leader in the wake of poor local election results, and Stojberg has been suggested as a “potential successor” by a leading party member. The same local election also saw poor results for the SDP, as cities with large numbers of immigrants and young Woke-types made their views felt by voting for the extremist Red-Green Alliance [How damaging is local election result for Danish PM Frederiksen?, by Michael Barrett, The Local, November 17, 2021].

Stojberg claims to have been “disappointed” by the result, and there will now be a vote on whether she can continue as a Member of Parliament. But it is possible that it will be a serious boost for her career and her enemies will come to deeply regret what they’ve done.