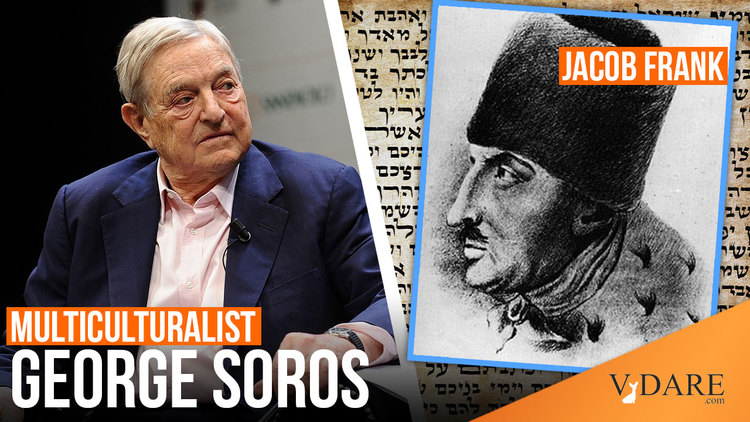 The Jewish financier George Soros is allegedly the “bugaboo of European nationalists” [A veto gives the rule of law in Poland a reprieve, The Economist, July 29, 2017]. Born in Hungary, and escaping Nazi occupation to Britain and then America, this nonagenarian now  uses his millions to fund such groups as the “Open Society Foundation” and the “Central European University,” which spread multiculturalist propaganda to the point where Hungary’s nationalist government drove it out [‘Democracy is in recession, academic freedom is in danger,’ by Nathan Greenfield, University World News, November 3, 2021]. For whatever reason, Soros seems to want to destroy nation-states and political order in general. Why is this? Could he be…a Sabbatean Frankist?

In Kevin MacDonald’s much-denounced “Culture of Critique” model, Jews are supposedly motivated to undermine anything that promotes a sense of European nationalism and unity, because this aids Jewish ethnic interests. In the words of Hebrew Immigrant Aid Society head Leonard Glickman, when asked why HIAS was importing Muslim Somali Bantus into America: “The more diverse American society is the safer [Jews] are.”

But could there be something even more sinister involved? After all, it’s not at all clear that mass immigration—and this is specifically what Soros promotes—is actually “good for the Jews.” Apart from anything else, it involves bringing large numbers of Arab Muslims into Western countries. And Arab cultures are the most anti-Semitic in the world, according to surveys [Survey: One-quarter of the world harbors anti-Semitic sentiment, by Lauren Markoe, Washington Post, May 3, 2014].

The predictable result: a massive rise in anti-Semitic attacks in countries such as France, whose immigrants are overwhelmingly Muslim, and an exodus of, for example, French Jews, to Israel. This exodus has been so enormous that it is influencing Israeli politics [How Jews fleeing anti-Semitism in France are influencing Israeli politics, by Don Murray, CBC, May 1, 2020].

On some level, if we accept MacDonald’s model, promoting mass immigration in the West may be a Jewish “evolutionary strategy.” But this doesn’t seem to be so obviously the case with the kind of mass immigration of young Arab males that is being promoted by George Soros. It’s as if Soros wants to create chaos—Hell on Earth—for everybody: Jew and Gentile alike. And, it seems, he especially wants this for Orthodox Jews, who are the most likely to be targeted, due to their appearance.

Similarly, the “Soros Prosecutors’” drive to release criminals onto the streets, and to decriminalize offenses like shoplifting, with the result that it becomes rife and stores close down, seems positively deranged. How can anybody benefit from this, least of all property-owning capitalists?

Well, there is a strain in Jewish theology that would make sense of such behavior:   Sabbatean Frankism. Its followers pretend to be normal Jews—or are Crypto-Jews, passing as Christians or Muslims—while attempting to be as thoroughly evil as possible. Could this make sense of the life of a man who damages the interests of Jews just as much as he does those of European Gentiles?

The movement can be summarized in the title of an essay on the topic: “Redemption Through Sin” [Gershom Scholem: Master of the Kabbalah, by David Biale, 2018].

According to Jewish historians, in 1648, Sabbati Zevi (1626–1676), a Turkish Sephardi Rabbi, proclaimed himself the new Messiah and garnered an enormous following in the Jewish communities of Turkey and Eastern Europe. His movement was so influential that it culminated in Sabbati asking the Sultan to hand him Jerusalem (although Sabbati backed down to avoid being executed and converted to Islam for the same reason) [Sabbatai Zevi: Testimonies to a Fallen Messiah, by David Halperin, 2007].

According to historian Amir Engel [Gershom Scholem: An Intellectual Biography], Sabbati preached a “Gnostic” theology, whereby the world was the province of an evil god. Sabati’s followers were “sparks of light” of a good god, imprisoned in the universe of this wicked deity. You could only be “redeemed” by breaking all worldly laws, meaning that you had to be as “evil” as possible and sow chaos wherever you went

With Sabbati’s apostasy, the movement died down, but some ardent adherents believed that Sabbati was still the messiah and that one should pretend not to be a Jew, or not to follow his ideas, while secretly following them. This was known as being a “Dönmeh” [The Messianic Idea in Judaism, by Gershom Scholem, 2011, p.142].

The Sabbatean movement was revived by a Polish Jew called Jacob Frank (1726–1791). The son of a businessman, he met various Dönmeh on business trips to Greece and, upon his return to Poland, came to the conclusion that he was the messianic successor to Sabbati Zevi. At its height, Frank had 50,000 followers in Poland and elsewhere.

Some of Frank’s sayings speak volumes: “The way to life is not easy, for it is the way of nihilism—destruction; and it means to free oneself from all laws, conventions, and religions to adopt every conceivable attitude and to follow one leader step by step into the abyss” [quoted in The Influence of Sabbatean Frankism on the World, by Russ Winter, Winter Watch, October 16, 2020].

But asking about Frankism can hardly be “anti-Semitic.” The Frankists themselves oppose everything that Orthodox Judaism promotes. And Jewish scholars, and Jewish encyclopedias, are clear that Frankism is certainly very real [Frankism, by Pawel Maciejko, The Yivo Enclopedia of Jews in Eastern Europe, 2010]. Indeed, Frankism has been argued, by some Jewish scholars, to have been specifically influential on the “rabbinical elite” [Schmuel Feiner, The Origins of Jewish Secularization in Eighteenth-Century Europe, 2011, p. 66] and thus on elite Jews.

So, I think it’s worth at least asking the question: Is George Soros a Sabbatean Frankist?

Are we facing the apocalypse envisaged by the eighteenth-century English poet Alexander Pope?

Thy hand, great Anarch! lets the curtain fall,
And universal Darkness buries All.