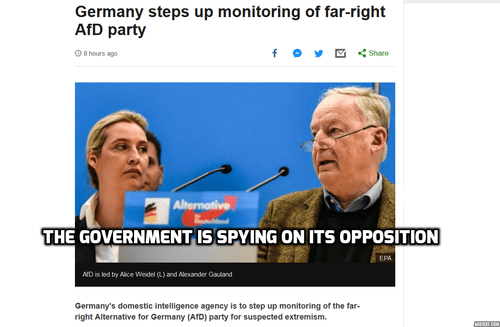 The specter of "controlled democracy," a system in which only certain political parties and individuals have any freedom to run for office, is spreading in the West. The German government has announced it is going to step up spying on the Alternative for Germany (AfD) Party, perhaps the only mainstream political movement in Germany that opposes the eradication of the German people through mass immigration.

Germany's domestic intelligence agency is to step up monitoring of the far-right Alternative for Germany (AfD) party for suspected extremism.

But the BfV agency is not yet going as far as to use informants or phone taps in its nationwide watch on AfD...

The BfV is empowered under the German constitution to act against perceived threats to the democratic order.

Already, there is no free speech in Germany, nor throughout most of Western Europe. There is a fundamental question at stake as to whether the Western "democracies" are actually democracies or free in any real sense.

After all, in Vladimir Putin's "authoritarian" Russia, you can run as an opposition politician and you can even win occasionally. Yet you face obstacles other people don't, selective prosecution, and harassment by official authorities. How is this any different than the situation in the West now? The main distinction is that Putin's Russia generally seems to crack down on movements that want to subordinate Russia to the same cultural authorities that rule the West, while the West suppresses those who want to overthrow this occupation.

Perhaps the real point is that "freedom" is always relative. There's no "free world." Any system will promote certain values and certain elites. The current Western system sees citizens as an enemy, immigrants as allies, and free speech for nationalists as a liability. It is "free" if you are a left-wing journalist, or an employee of a George Soros-funded NGO. But if you are an ordinary German who sees his community and his country being given away to people who despise you, the current system is the most wretched tyranny.