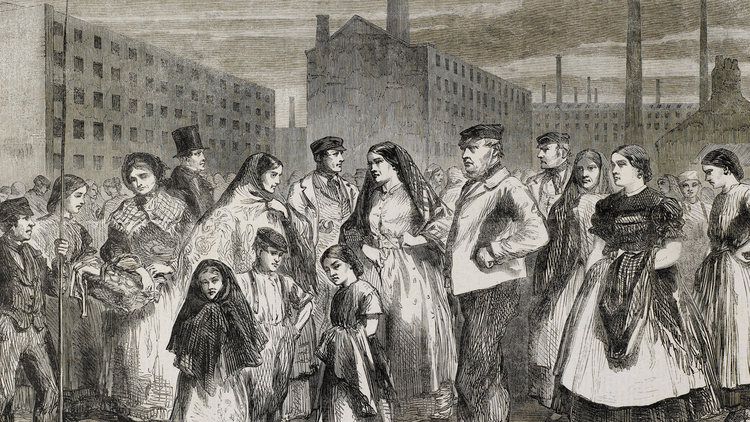 A Farewell To Alms: Why Did The Industrial Revolution Happen Where It Did?

An ambitious and provocative new book by University of California at Davis economic historian Gregory Clark, A Farewell to Alms: A Brief Economic History of the World attempts to explain two huge questions:

In the process, Clark offers a stunning rebuke to economists:

“God clearly created the laws of the economic world in order to have a little fun at economists' expense. In other areas of inquiry, such as the physical sciences, there has been a steady accumulation of knowledge over the past four hundred years. … In economics, however, we see instead that our ability to describe and predict the economic world reached a peak around 1800. In the years since the Industrial Revolution there has been a progressive and continuing disengagement of economic models from any ability to predict differences of income and wealth across time and across countries and regions.“

In other words, economists were closer to understanding the wealth of nations in 1776 when Adam Smith wrote The Wealth of Nations than they are today.

The pioneering economic works of Smith and Thomas Malthus (1798) accurately described the world before the Industrial Revolution that was just getting underway then with the employment of the steam engine in cotton mills. By 1817, when David Ricardo was pessimistically propounding what later came to be known as “the Iron Law of Wages,” England was moving in a new, liberating direction unexpected by economists.

In the modern world, a shortage of cheap labor turned out to be a blessing rather than a curse. The future belonged to countries with high wage, high quality work forces.

But the prestige of the economists and their Scroogeonomic emphasis on cheap labor was so great that Britain didn't even effectively outlaw the use of five-year-old boys as chimney sweeps until 1875.

Clark's book idiosyncratically combines the strengths and weaknesses of both economists and historians.

Although economists were long the butt of angry jokes, the improvement of the economy after the early 1980s has raised their prestige and self-confidence. As shown by the three million copies sold of Steven Levitt's Freakonomics, economists are the hot academics of the moment, the glamour professors, just as cultural anthropologists were back in Margaret Mead's heyday in the 1950s.

The strong point of economists is that they believe in “theory“ in the same sense that hard scientists do—as a tool for simplifying our understanding of reality and for making more accurate predictions. (In contrast, professors of English literature use the word “theory“ to mean the hateful mumbo-jumbo that they wield as a barrier to entry to their otherwise appealing profession—a barricade of bad writing that repels many of the huge number of people who love good writing and would otherwise want to be English professors.)

Yet, because economists have mastered some theory (they're particularly proud about understanding Ricardo's concept of comparative advantage in international trade), they tend to view reality not as what needs to be explained but as a vague inspiration for the occasional stylized example to illustrate their theories.

In particular, economists don't read much by non-economists. Just as their theory would predict, economists are driven by self-interest, and their profession does not much reward curiosity about anything written by outsiders. So a certain smug ignorance is widespread among economists (as we've seen repeatedly in the immigration debates).

It's become common recently to describe economists as “autistic“. But there's no need for that. The word “sophomoric” already exists.

In sharp contrast to economists, historians love facts and hate theories, a predilection that has the opposite advantages and disadvantages. Historians tend to be omnivorously curious and humble about how much they don't know. On the other hand, their love of detail makes them less likely to see the big patterns. And their emphasis on the uniqueness and complexity of events makes them prejudiced against predictions. Which means that while they are less often wrong than scientists, they are also less often right.

In the uneasy middle reside the economic historians.

Economic historian Gregory Clark begins A Farewell to Alms with a description of Malthusian England from 1200-1800. Due to England's wonderful stability, we have legal documents about property ownership and other economic facts going back 800 years.

Even though medieval England had a free market economy with negligible taxes, and while the lives of the affluent improved due to inventions such as eyeglasses and the printing press, farm laborers saw no increase in their daily calorie intake over these 600 years. Indeed, the vast working class ate best in the generations after the Black Death of the mid-14th Century killed off a sizable fraction of the population, leaving more land and thus more of the roast beef of merrie olde England per survivor.

It's important to remember, however, that life didn't always seem as depressing to the English at the time as Clark often makes it sound. In the depths of the Malthusian trap of the late 16th Century, for example, one Englishman described his native land as:

“This royal throne of kings, this sceptred isle, This earth of majesty, this seat of Mars, This other Eden, demi-paradise … This blessed plot, this earth, this realm, this England.”

And despite their poverty, Malthusian-era English workers at least lived better than their counterparts in much more crowded China and Japan. That's in part because they practiced population control through self-discipline, postponing marriage until they could afford it. Women didn't marry on average until age 24 to 26, and a minority never married. (Illegitimate births only made up 3-4 percent of the total.) As Jane Austen's novels show, marriage was a serious business revolving around love and money.

In contrast, the Chinese tended to marry in their late teen years. So populations would rapidly ascend to the maximum that current farming techniques could support under good government, then crash during spells of bad government—most recently in the early 1960s, when tens of millions of Chinese starved to death following Mao's misbegotten Great Leap Forward.

Clark's most important original research involves tabulating a couple of thousand wills from Will Shakespeare's era. Although today we expect the poor to have more children than the rich, the opposite was true before the Industrial Revolution. The richest testators' had twice as many surviving children as the poorest. Therefore, laborers tended to die out, while the lineages of the successful flourished.

Thus the modern English are descended primarily from well-to-do farmers. In contrast, nobles tended to kill each other off—from 1330 to 1479, 26 percent of male aristocrats died violently—and townsmen often died of diseases.

So the English are mostly the offspring of what Clark calls “the strivers” of generations past: the people who farmed hard and effectively and saved their money to buy more land.

From this, Clark deduces an explanation for the rise and spread of the Industrial Revolution that has surprised the economics profession.

As Nicholas Wade, the genetics reporter of the New York Times, explained in his August 7, 2007 article In Dusty Archives, a Theory of Affluence, Clark believes the Industrial Revolution

“… occurred because of a change in the nature of the human population. The change was one in which people gradually developed the strange new behaviors required to make a modern economy work. The middle-class values of nonviolence, literacy, long working hours and a willingness to save emerged only recently in human history, Dr. Clark argues. Because they grew more common in the centuries before 1800, whether by cultural transmission or evolutionary adaptation, the English population at last became productive enough to escape from poverty, followed quickly by other countries with the same long agrarian past.”

For example, interest rates were much higher in the past until the last few centuries. Clark argues that this is because the supply of savings was lower, due to people being more impulsive.

“Through the long agrarian passage leading up to the Industrial Revolution, man was becoming biologically more adapted to the modern economic world. … The triumph of capitalism in the modern world thus may lie as much in our genes as in ideology or rationality.”

The crucial thing to realize about A Farewell to Alms is that Clark is trying to answer these two very different types of questions with one response.

This is a historian's question because it's a unique event. There's no point in developing a general theory about where and when the Industrial Revolution is most likely to take place, because—assuming the entire world does not descend into a Mad Max post-apocalyptic wasteland—it will never happen again.

Nor does there seem to be much point in looking for genetic differences that would explain why the Industrial Revolution happened in England rather than in, say, Holland. Another researcher into wills has found the same pattern of the rich out-reproducing the poor in centuries past in Austria and southern Germany; it's been found among the Ashkenazi Jews of medieval Europe; and it probably will be found in many places at many times when others bother to look.

Similarly, Northeast Asia's offshore islanders, the Japanese, are awfully bourgeois today, with higher savings rates and lower crime rates than the English, so I don't think Clark's theory of how the bourgeois virtues were selected for in the English will serve to explain why the Japanese didn't invent the steam engine.

My guess is that the Industrial Revolution took both middle class habits of mind, for which the Japanese had evolved plenty of capability, and a little of the “zigzag lightning in the brain” that the Japanese have always claimed they lack in comparison to the more innovative Europeans.

If the question is, “Why did England rather than mainland Europe invent the modern world?” I'd turn once again to John of Gaunt's speech in Richard II in which he describes the advantages of isolation on an island:

Paul Johnson wrote in A History of the English People that:

“Isolation … is the most consistent single thread running through the tapestry of English history. … It does not preclude contacts, exchanges, cooperation: but it inhibits the systematic involvement with the land-mass which diminishes, and in the end destroys, the island privilege.”

In contrast, Clark's second question—Why have the blessings of the Industrial Revolution spread to some countries but not to others?—is more important for the future. It can tell us something about where we're all going to live the rest of our lives—and our children, in their lives.

I'll review this second question and spell out Clark's implications more explicitly than he does next week.

[Steve Sailer (email him) is founder of the Human Biodiversity Institute and movie critic for The American Conservative. His website