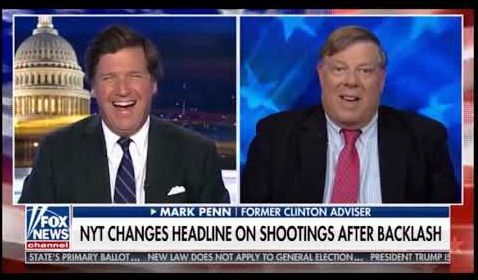 The great headline switch perpetrated by the New York Times on Tuesday got a lot of attention on Fox News because the phrase went from positive and accurate (“Trump Urges Unity vs. Racism”) to niggling and political (“Assailing Hate but Not Guns”).

The big surprise was that the hopelessly liberal Times could pen an upbeat headline about President Trump at all.

Tucker Carlson discussed the flap with Mark Penn, a long time Washington insider who once worked as pollster and advisor for the Clintons. Penn recalled that he could never get a headline changed for the Clintons, but Alexandria Ocasio-Cortez is a “phenomenon” in terms of media power to be able to get that switch.

This morning the paper’s print headline summarized the President’s speech in El Paso and Dayton this way, quote, “Trump urges unity versus racism.” That’s what the President did. You saw it, so the headline was fine. It described what happened.

But online, the left went crazy, even crazier than usual. Cory Booker, apparently still running for President, accused the New York Times of somehow putting lives at risk. Alexandria Ocasio-Cortez — the pampered moron that she is — said the paper was enabling white supremacy through cowardice. So of course, the paper caved.

Later versions of the article were headlined, “Assailing hate, but not guns.”

Mark Penn is a former adviser of Bill and Hillary Clinton. He joins us tonight.

Mark, I’m worried because I think every country, this one particularly, deserves two sides that are both sane and capable of rational conversation. If you believe that the New York Times is carrying water for right wingers or white supremacists, you’re delusional, I think.

MARK PENN: Well, look, you could think that either headline was okay. But the process of the headline that was factually correct and frankly, was unifying after these horrifying events would then be complained about by one political faction and changed. That is an astounding development in journalism. I’ve never seen it; maybe it’s happened before.

Why don’t they just run the headlines before AOC before they run them down and not get into the situation? I’ve never seen anything like this. I mean, that would be the way to go to avoid this kind of trouble. Is that journalism today? I don’t think so.

PENN: Well, and that was the old New York Times that I knew. I used to complain when I was working with Hillary and Bill about the headlines all the time, I never got one changed.

Maybe I got a paragraph six graph down changed, but you know, they were the paper of record. They said how they saw it. And that was that.

To actually bend after it is printed to a political faction is to cave in a way that I think will haunt them for some time to come.

CARLSON: So what’s changed? Is it social media?

PENN: Well, what’s changed is, one, there is social media, but regardless of the social media, the paper wanted to please a constituency, and they weren’t willing to stand behind their own headline, and were then willing to change it for that constituency. That is incredible.

CARLSON: It is incredible. It is incredible. So I mean, you’ve been in Washington an awfully long time and known a lot of people in power here. Have you ever seen anybody under 30 with this much political power as Alexandria Ocasio-Cortez?

PENN: No. It’s not political power. You see, Pelosi is right. Pelosi runs the House, but when it comes to media power, right, and the influence across our culture and society, she is a phenomenon that is really quite powerful. I mean, she could change a headline on the New York Times.

CARLSON: Yes. I mean, it’s like a child with a firearm. It’s just — she is scary. I’m glad I’m not a Democratic leader. I’m glad I’m not Nancy Pelosi. It’s probably the first time I ever thought this. I mean, how would you like to have to deal with that? I almost feel sorry for Pelosi – – almost. Mark Penn, great to see you.