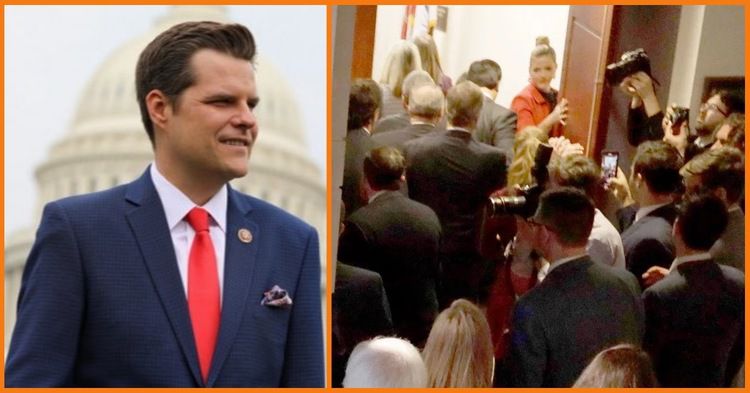 Florida Rep. Matt Gaetz (FL-1) led the charge against Rep. Adam Schiff’s Star Chamber impeachment this week—literally. Gaetz and 25 other Republicans burst into an impeachment hearing in a secure Capitol Hill conference room on Wednesday [House Republicans Literally Storm the Impeachment Hearings, by Sam Brodey and Sam Stein, The Daily Beast, October 23, 2019]. The disruption publicized the Republicans’ demand to hold open hearings on President Trump’s alleged misconduct. The Main Stream Media and the political Establishment predictably melted down; Trump’s patriot base loved it. It proved Gaetz is a fighter of Trumpian instinct. He fights tech censorship, hits hard the race question, stands up for persecuted right-wingers, and backs a non-interventionist, America-First foreign policy. On immigration, he’s second only to staunch immigration patriots like Steve King and Mo Brooks. Gaetz is only 37, but he is joining Ted Cruz, Tom Cotton, Donald Trump Jr., Josh Hawley, Kris Kobach, Tucker Carlson and others as possible leaders of MAGA 2.0.

Little, if anything is not to like about Gaetz. Consider the anti-SCIF ("Sensitive Compartmented Information Facility")blitzkrieg. The Republican Establishment has been notably impotent on impeachment. Not Gaetz. He seized the MSM’s attention and stood up for Trump, who wants and needs his party to fight impeachment hammer and tongs. Where most Republicans bailed on Trump, at least House Minority Whip Steve Scalise and many members of the House Freedom Caucus joined Gaetz’s charge.

The reaction from the MSM and anti-Trump Democrats was predictable. #ArrestMattGaetz trended on Twitter, and pundits spewed venom at the knucklehead Republicans. Plus, of course, the rally to Trump’s defense against Schiff’s kangaroo court was “racist” because it involved a bunch of white men [‘Horde of clueless angry white men’: Internet mocks Matt Gaetz for leading a raid on a secure impeachment hearing, by Matthew Chapman, Raw Story, October 23, 2019].

But Gaetz didn’t apologize for being white or protest that he has many black friends. Instead, he hit back at the Left’s anti-white identity politics in conversations with Hallie Jackson of MSNBC and Fox’s Tucker Carlson.

"I guess, Tucker, I'm a little old fashioned. I identify as a white male, because I AM a white male. And to use language the left is familiar with, I guess it's because I was born this way."

“When @RepSpeier walks in a room, I don’t sit there and say a white woman came in…This is the type of identity politics from the left that seems to permeate any substantive or procedural arguments @TheDemocrats make"

And that wasn’t the first time Gaetz returned fire at the Left over anti-white rhetoric. At a September hearing on police reform, the Florida lawmaker grilled Al Sharpton [Rep. Gaetz clashes with Al Sharpton at House hearing on police brutality, by Marisa Schultz, New York Post, September 19, 2019]. Gaetz demanded answers on Sharpton’s anti-white comments and activities that include such notorious moments as the Tawana Brawley hoax and this invitation to New York’s Jewish community: “If the Jews want to get it on, tell them to pin their yarmulkes back and come over to my house” [Newsweek Whitewashes Al Sharpton, by Larry Elder, Orange County Register, August 10, 2010].

As a Florida state representative, Gaetz vouched for the necessity of “stand your ground” laws after George Zimmerman killed Trayvon Martin in self-defense. “It would be reactionary and dangerous to make Floridians less safe to pacify uninformed protesters,” he said in 2013 [Matt Gaetz, Chair Of Florida ‘Stand Your Ground’ Hearings: ‘I Don’t Support Changing One Damn Comma’, HuffPost, August 8, 2013]. (Zimmerman’s successful defense did not rely on “stand your ground” laws, and he could not have fled if he wanted to—Martin pinned him to the ground).

Very proud to have the talented Dr. Darren Beattie helping our team as a Special Advisor for Speechwriting. Welcome on board!

The congressman also stood up for right-wing activist Charles Johnson. Johnson attended the 2018 State of the Union as Gaetz’s guest, which invited the usual MSM flash mob. Johnson, we heard, was a white supremacist and Holocaust denier. But instead of doing the typical cuck and duck, Gaetz defended his guest and refuted the false accusations [Republican congressman defends notorious Holocaust denier he invited to SOTU, by Luke Barnes, ThinkProgress, February 1, 2018].

If all that’s not enough, Gaetz is one of the main Republicans fighting tech censorship. He supports Missouri Sen. Josh Hawley’s bill that targets Big Tech’s privileges over its censorship and bias. “I’m a conservative. I don’t want Washington running my life, but I sure as hell don’t want Silicon Valley running my life,” he explained [The Fight Over Section 230—and the Internet as We Know It, by Matt Laso, Wired, August 13, 2019].

In 2018, Gaetz grilled Big Tech reps about their companies’ violations and even dared mention American Renaissance founder Jared Taylor, banned from Twitter along with his webzine in 2017. Gaetz noted that such selective censorship undermines the tech giants’ absurdly disingenuous claim that they aren’t  publishers making editorial decisions. (Alas, the Florida congressman did, apparently, feel compelled to triangulate and smear the honorable and erudite Taylor as a “horrible human being” [Social Media Filtering Practices Judiciary Hearing, Congressman Matt Gaetz, YouTube, July 17, 2018]).

Gaetz is no neoconservative on foreign policy or immigration. In May, he outlined a staunchly America First foreign policy and how America should focus on securing our own borders instead of Afghanistan’s [Is Matt Gaetz the future of Trump foreign policy?, by Curt Mills, Spectator USA, June 12, 2019]. A near-perfect immigration patriot, he has an A+ rating from NumbersUSA. He ran for Congress in 2016 on a Trumpian message that warned of the dangers of illegal immigration and Islamic terrorism [Matt Gaetz runs for U.S. Congress, blasts 'illegal immigrants' and 'Muslim terrorists', by Dara Kam, News Service of Florida, March 21, 2016]. He supports Trump on building the wall and aggressively enforcing immigration law. He is a co-sponsor of the RAISE Act, which would halve legal immigration and reform our system to put America first.

And, again, Gaetz is not afraid to defend speech that sends the anti-Trump Left and its MSM auxiliary into a frothing rage. He defended Trump’s “s**thole” comments by stating that Haiti is, in fact, a deplorable place [GOP Lawmaker Matt Gaetz Slams Haiti: ‘Sheet Metal And Garbage’ Everywhere You Look, by Ed Mazza, HuffPost, January 16, 2018]. In another volley at Leftist GroupThink, he noted illegal immigrant violence is a more serious problem than gun violence. “The greatest driver of violence—in the circumstances that I indicated—was not the firearm. It’s the fact that we have an immigration system that allows people to come here violently,” he said at a February hearing on gun policy [Parkland dad says he interrupted GOP rep at gun hearing to ‘let the nation know he's wrong,’ by Veronica Stracqualursi, CNN, February 7, 2019].

One blemish: Gaetz voted for the infamous Fairness for High-Skilled Immigrants Act in July, which would scrap country caps on work visas and give Indians at least 75 percent of all employment-based visas, meaning corporate America could and would hire more Indians (who clearly gravitate to the Left) to replace high-skilled Americans. Fifty-seven House Republicans voted against the bill, including immigration patriots Steve King and Mo Brooks.

Gaetz’s Yes vote diminishes his immigration patriot status, but doesn’t eradicate it. Other immigration patriots, such as Senators Tom Cotton and David Perdue, also support the Indian green card giveaway. Unquestionably, donor pressure was intense, and the bill does not increase the overall inflow, so they may well have reasoned it’s just a technical adjustment. Gaetz’s vote unfortunate, and indicates room for improvement. But his solid record on everything else demonstrates that he’s educable.

A strong candidate for higher office, Gaetz has a bright future even if open spots higher up the Sunshine State’s political food chain are few and far between. GOP Gov. Ron DeSantis is up for re-election in 2022. Gaetz is an ally to the Trumpist governor and likely won’t attempt a primary. But Sen. Marco Rubio must defend his seat in 2022. If he betrays Trump, Gaetz is strongly positioned to primary him. Some in Trump world see Gaetz as a future House Speaker, a reasonable view considering his leadership this week. A second-term Trump would want and need a stronger speaker than Kevin McCarthy if Republicans retake the House.

Or maybe Gaetz could run as Trump’s successor in 2024. Trump proved you needn’t be a senator or a governor to win the nomination. Connecting with the Historic American Nation is key. Gaetz has four years to build a national following and name recognition.

My verdict: Keep an eye on him. Trump said Gaetz is “going places” for a reason: He’s a leader in the new, Trumpian Republican Party.