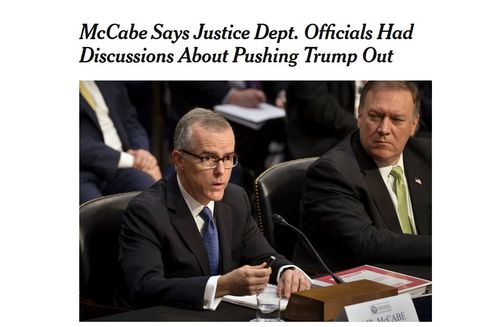 Deep State Resistance Proves That Personnel Is Policy—People Need To Be Fired!

Recently in the news is that most of the top management of the Federal Bureau of Investigation (FBI) and the Department of Justice (DOJ) led by Andrew McCabe were engaged in a conspiracy to overthrow the elected government of the United States. None of these traitors and criminals have been arrested and only a precious few have had their employment terminated.

The reason is that President Trump has failed to select people who support his policies and place them in his administration. Personnel is policy, but President Trump does not realize this. The current failure on the wall is additional evidence. His current advisers are telling him to sign the current budget bill than includes an amnesty for illegal aliens and no money for the wall, only a pittance for 55 miles of bollard fencing. McCabe, Yates, Comey, and the whole cabal should have been fired on Inauguration Day but President Trump did not even want to fire them, much less fill the positions that were open. He thought he could make economies and impose his will on the lower level bureaucrats. Was he ever wrong! Instead of filling the government with his appointees loyal to him and his new policy, he either acquiesced to enemies like Rod Rosenstein or refused to fill positions, giving the Deep State free rein in the bureaucracy.

“The election happened,” remembers Elizabeth Sherwood-Randall, then deputy secretary of the Department of Energy. “And then there was radio silence.” Across all departments, similar stories were playing out: Trump appointees were few and far between; those that did show up were shockingly uninformed about the functions of their new workplace. Some even threw away the briefing books that had been prepared for them.

Ignore the hyperventilating by about uninformed Trump appointees, that is standard resistance rhetoric by Deep Staters. The truth is the part about Trump appointees being few and far between and the radio silence. The Trump Administration did not take control of the bureaucrats, consequentially people like McCabe, Peter Strzok, Robert Mueller, Rosenstein, David Marin, Elaine Duke, Yates, and others created their own shadow government.

I warned President Trump about the threat of the resistance with regard to the immigration bureaucracy. [President Trump Will Have Foes In Immigration Bureaucracy—But Also Friends. They Can Help Him Win, by Federale, VDare, April 25, 2016] A reader recently provided more information on saboteurs in the permanent government. And in one of the Department of Homeland Security (DHS) components, U.S. Citizenship and Immigration Services (USCIS), that I warned about, is where the problem lies, and for which I proposed some solutions. [Taming U.S. Citizenship and Immigration Services, by Federale, Federale Blog (deleted by Google), December 17, 2016]

But the widespread sympathetic attitude USCIS bureaucrats have to aliens is still a problem, brought to my attention by a reader.

An Asylum Officer whose primary concern is not protecting the United States, but helping asylum applicants.

During law school, I participated in immigration clinics as a student attorney, providing legal representation to immigrants in removal proceedings and helping people apply for asylum. When it came time for me to select an agency and program for my Presidential Management Fellowship, the USCIS Asylum Division was a logical next step. I found my colleagues were all very committed to protecting people from persecution — this realization inspired me to continue working in this field after completing my fellowship.

What is most rewarding in your job?

My work as an Asylum Officer has placed me in a unique position where, every day, I meet new people from around the world who are fleeing from persecution. I collect testimony from asylum-seekers, often eliciting harrowing accounts of bravery and perseverance, while at the same time reviewing each case for potential fraud to protect our national security.

Through personal interviews with asylum applicants, abstract human rights issues are given a name and a face. The stories I hear from applicants are compelling and memorable, and they open my eyes to pressing human rights concerns worldwide on a daily basis.

In certain cases, immigration judges decide asylum applications. In others, Asylum Officers decide who will be granted asylum, and, in doing so, provide the opportunity for safety for thousands of persecuted individuals.

As an advocate prior to joining the Asylum Division, I was tasked with persuading others to approve my client’s request for a benefit, but I had no control over the outcome. The futures of my clients were in someone else’s hands. Now I am in a position to ensure every applicant who comes before me receives a fair adjudication.

This is symptomatic of the problem with the bureaucracy. Officer Ladd considers herself an advocate for the persecuted. That is not her job. She is supposed to adjudicate an application for asylum, most of which are fraudulent. But her statements clearly show that fraud and false statements about applications for asylum are not her priority. Note in her statement, she has prejudges all applicants, they are “fleeing persecution” and about “abstract human rights issues [that] are given an name and a face.’  The real face of an asylum applicant is a lying economic migrant or a terrorist. She moved easily from an advocacy group to the bureaucracy, much too easily. Clearly neither she, nor her managers at the Houston Asylum Office care about fraud. You can contact her or her supervisors, Marie Hummert, Director, and Jessica Walters, Deputy Director, here or at (281) 931-2100.

His answer was circumspect, but unequivocal: “Any report that mischaracterizes what the FBI does is bad,” he said. Then added, “My focus is on this Washington, not that Washington.”

[Seattle’s New FBI Special Agent In Charge Says This Washington, Not The Other One, Is His Priority, by Mike Carter and Steve Miletich, Seattle Times, Febuary 7, 2019]

This was a very public and insubordinate attack on the President, and one that is not true. FBI management has been engaged in a coup attempt against the elected President. And more importantly, President Trump’s enforcement priorities, e.g. “that Washington” is what Duda is supposed to follow. The President makes policy, not GS-15 bureaucrats.

Worse yet, Duda lied about terrorism, claiming that white Americans are terrorists, only true if you include environmental and animal rights terrorists. Otherwise, terrorism is brown and black.

Duda said one of his goals is to eliminate misperceptions about the agency, and one of those is that it focuses its terrorism investigations on foreigners. The reality is that the “vast majority” of those probes involve “white U.S. citizens,” he said.

On the contrary, according to the FBI Terrorism news feed, almost all recent arrest for terrorism are alien, brown, or black. Perhaps Duda has been deceived by them being called Maple Heights Man , Manhattan Man  , Fort Pierce Resident,  and North Carolina Man  . And this is the major failing of the Trump Administration, it is not paying attention to who is hired and promoted in the bureaucracy. A major blunder. President Trump must act to reign in the bureaucrats or they will sabotage all his efforts.