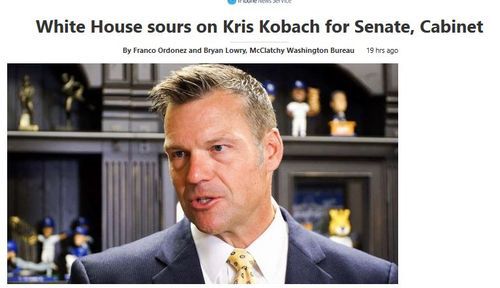 Why Doesn't The Trump Administration Hire Kobach And Barletta?

Immigration patriot Kris Kobach may get the cold shoulder from the White House.

A new report from McClatchy claims the administration is not interested in giving Kobach, an early supporter and adviser to Trump, a cabinet position or support for a possible 2020 Senate run in Kansas. [White House sours on Kris Kobach for Senate, Cabinet, by Franco Ordonez and Bryan Lowry, McClatchy, February 26, 2019]

According to McClatchy’s sources, President Trump likes Kobach, but “the president's concerns about Kansas and Kobach, the soon-to-be open Senate seat is more important to Trump than any personal debt the president might feel toward the former Kansas secretary of state for his work in the 2016 campaign.”

On the cabinet position, it looks like establishment figures in the White House don’t want Kobach there and prefer swamp creatures to genuine Trumpists. Kobach was a strong contender to replace Homeland Security chief Kirstjen Nielsen when she was allegedly on the chopping block last year. But Nielsen, an establishmentarian who Trump hates, is still in office and doesn’t appear to be going anywhere.

Kobach is one of the leading experts on immigration law and enforcement in the country and would serve as a terrific DHS chief. But he seems too woke for the administration.

The same can be said of fellow immigration patriot Lou Barletta. Barletta was one of the first congressmen to endorse Trump and has an impeccable record on immigration. He was considered for Transportation Secretary at the start of Trump’s tenure, but chose to run for Senate instead. [Rep. Barletta in the running to be Trump's transportation secretary, by Rachel Bade, Politico, November 28, 2016] He would make a great addition to the administration, yet he seems left out and forgotten at the moment.

Trump’s lack of support for early supporters is best represented by his horrible treatment of Jeff Sessions. Yes, Sessions shouldn’t have recused himself from the Russia investigation, but he was still the best attorney general Trump could ever have. He endorsed Trump when it was considered political suicide, and he shaped the president’s immigration policy in a more patriotic direction. Sessions also made serious accomplishments on immigration policy during his time as AG.

However, Sessions was unceremoniously drummed out of the administration and is still despised by Trump world.

Kobach is different in that he has committed no sins against the president and has remained a loyal supporter. He is at least owed a spot in an administration that desperately needs another immigration patriot. But the White House appears off-limits for genuine Trumpists, with many loyalists and talented immigration patriots kept out.

One hopes the McClatchy report is “fake news,” and the paper does have a record of publishing inaccurate information about the administration. [ MICHAEL COHEN REPORT IS BASED ON THIRD-HAND INFORMATION, REPORTER REVEALS, by Chuck Ross, The Daily Caller, December 28, 2018] The only way to disprove the report is to see Kobach in the administration.